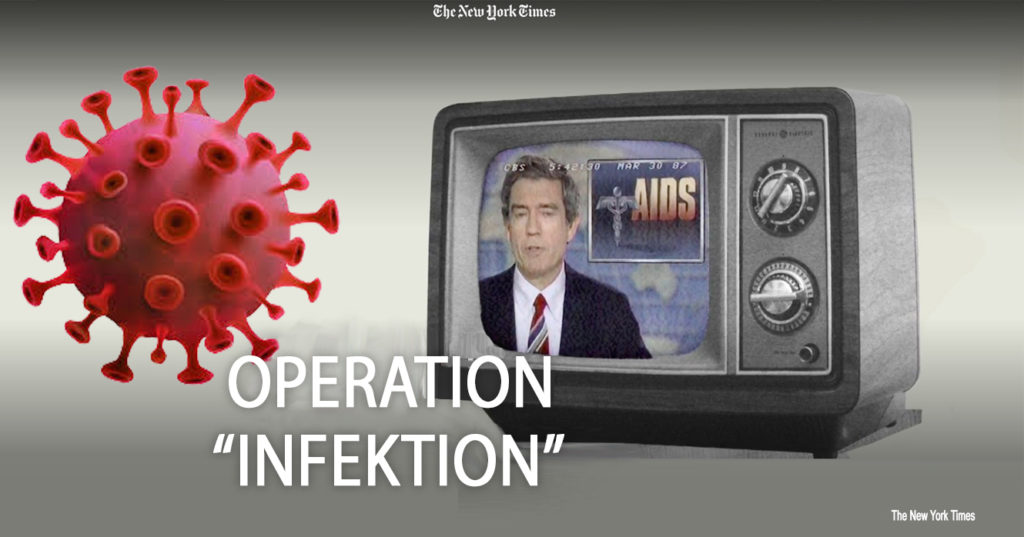 On April 20, 2020, Arno Khidirbegishvili, editor-in-chief of pro-Kremlin online media outlet, Sakinformi, shared on his Facebook page an article published by the same media outlet titled “Sensation! Georgian analyst solved the mystery of the coronavirus – Khidirbegishvili proved to be right.”

The article notes that on March 24 and then on April 11, Khidirbegishvili spoke about “a sensational version” of the origin of COVID-19 in the interview with News Front. According to this version, COVID-19 and AIDS are biological weapons created in one and the same military biological labs and both viruses were made intentionally to destroy the population and the army of an adversary.

The article stresses that a month later Khidirbegishvili’s version was confirmed by French virologist Luc Montagnier who alleged on April 17, 2020 that COVID-19 was made in a lab.

Khidirbegishvili also notes that in October 2017, the Pentagon was collecting biological samples from Russians as well as different ethnic groups and people of the former Soviet Union living in different geographical locations of the Russian Federation.

As of December 24, Sakinformi’s article has 176 shares. The article was also shared by Facebook page Stalin. 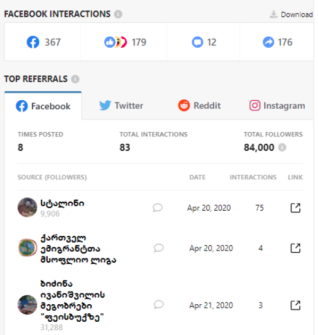 Khidirbegishvili promotes conspiracy theories about COVID-19, AIDS and Pentagon research: 1) The claims as if AIDS and COVID-19 are man-made viruses lack scientific evidence. A conspiracy theory as if AIDS was made in a lab was first spread by KGB during the Soviet period to promote anti-American sentiments; the operation is known under the codename Infection. Later, Yevgeny Primakov also acknowledged it. 2) Commenting on the conspiracy theory about the Pentagon allegedly collecting biological samples of Russians in 2017, Capt. Beau Downey of the U.S. Air Force clarified that the research aimed to identify various biomarkers associated with injury, adding that the first group of samples were sourced from individuals of Russian descent and to continue the research, similar samples were required.

Similar symptoms of COVID-19 and AIDS do not confirm their common artificial origin.

Arno Khidirbegishvili cites similar symptoms of COVID-19 and AIDS, among others fever, cough and diarrhea, as an argument behind the version that both were made in a lab.

The scientific community agrees that both AIDS and the novel coronavirus evolved naturally, whereas the widespread conspiracy theories have no scientific evidence.

AIDS, the same as the acquired immunodeficiency syndrome, is the final stage of HIV infection. It is supposed that scientists traced the origin of HIV back to chimpanzees and simian immunodeficiency virus (SIV), an HIV-like virus that attacks the immune system of monkeys and apes. In 1999, researchers identified a strain of chimpanzee SIV called SIVcpz, which was nearly identical to HIV. SIVcpz likely jumped to humans when hunters in Africa ate infected chimps, or the chimps’ infected blood got into the cuts or wounds of hunters. Researchers believe the first transmission of SIV to HIV in humans that then led to the global pandemic occurred in 1920 in Kinshasa, the capital of the Democratic Republic of Congo.

In 1981, the U.S. Centers for Disease Control and Prevention detected the first confirmed case of AIDS among five young men, all active homosexuals. In the late 1980s, about 400,000 AIDS cases were reported worldwide. In 1982, the disease was classified as the human immunodeficiency viruses (HIV).

Scientists agree that COVID-19 evolved naturally and crossed into humans from an animal species, most likely a bat.

COVID-19 and AIDS belong to different families. AIDS belongs to the family of retroviruses and COVID-19 – to the family of coronaviruses. Both are contagious viruses; however, the coronavirus is spread by respiratory droplets, as well as touching one’s own mouth, nose, or eyes with unwashed hands, having close contact with a sick person (touching, shaking hands). As for the spread of HIV/AIDS, it is transmitted through blood, semen, vaginal fluids and breast milk. HIV/AIDS can only be spread through specific activities, such as having a sex with someone who has HIV without using a condom or taking medicines, as well as sharing injection drug equipment, such as needles, with someone who has HIV. Thus, unlike the coronavirus, HIV/AIDS is not transmitted through shaking hands and sharing food or dishes.

Similar symptoms cannot be used as a proof that the coronavirus and AIDS are of common origin and that both were made in a lab. Influenza and COVID-19 also have similar symptoms, but they belong to different families of viruses and respectively, their origin is different as well.

Luc Montagnier’s statement and criticism voiced against him

Sakinformi’s article stresses that Khidirbegishvili’s version was also confirmed by French virologist Luc Montagnier who alleged on April 17, 2020 that COVID-19 was made in a lab.

In the interview with French TV channel CNEWS, Luc Montagnier said that the coronavirus was made in the Wuhan lab. He also noted that it was done in an attempt to make an HIV vaccine. The French virologist also added that together with his French colleague Jean-Claude Perrez, he analyzed the virus genome and found that the coronavirus has the sequence of genetic particles that is partly identical to that of HIV infection. 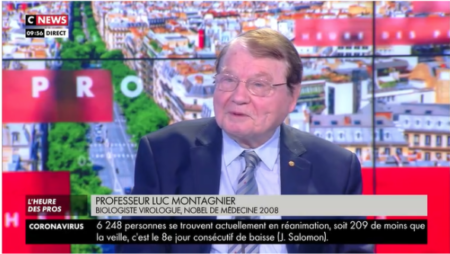 Montagnier also said that he was not the first to find it, citing an example of the research released by a group of scientists from the Delhi University on January 31, 2020. The authors of the research note that there is “an uncanny similarity” of unique inserts in the 2019-nCoV spike protein to HIV-1 that, as Indian researchers claim, is “unlikely to be fortuitous in nature.”

It is noteworthy that this paper has been withdrawn by its authors in early February in response to comments received from the research community on their technical approach and their interpretation of the results. One of the authors writes in the comments section that it was not their intention to feed into the conspiracy theories. 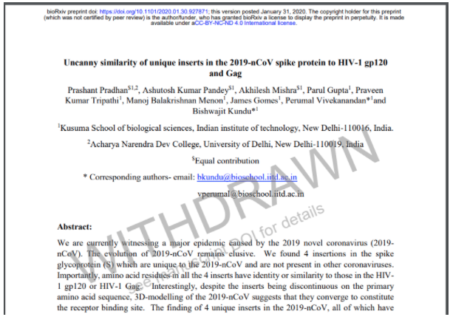 Furthermore, the Indian researchers’ paper was also criticized in the report published by Emerging Microbes & Infections on February 14. According to the report, the analysis of four insertions provided by Indian researchers lacks any evidence to prove that 2019-nCoV might be generated by gaining gene fragments from the HIV-1 genome.

88-year-old Luc Montagnier, famous French biologist and virologist, became the laureate of the Nobel Prize in 2008. He gained international recognition after making a significant contribution to the discovery of HIV/AIDS. However, his doubts about natural origin of COVID-19 triggered a wave of criticism from the scientific community. According toCNEWS, 106 academicians of science and medicine spread a joint statement, noting that they cannot accept the messages from one of their colleagues that are outside the scope of his skills and are simultaneously dangerous for health.

KGB invented a conspiracy theory about artificial origin of AIDS

It is not the first time Arno Khidirbegishvili spread the conspiracy theory about the AIDS virus. Speaking in the interview with Russian news agency REX in 2016, he noted that the AIDS virus was created in Pentagon’s chemical lab to use it as an experiment against the Vietnamese.

Conspiracy theories about artificial origin of the AIDS first emerged during the Soviet period and it is known as the Soviet KGB operation dubbed Infection. In the epoch of the Cold War, Soviet intelligence services placed greater emphasis on deception operations called “active measures.” Spreading disinformation about the AIDS was one of such “active measures” carried out by the Soviet KGB.

Disinformation campaign based on unjustified accusations was launched in 1985 and it aimed at fomenting anti-American sentiments. Later, it emerged that the AIDS disinformation was invented by the Soviet KGB. Yevgeny Primakov, at the time the first deputy chairman of the Soviet Peace Committee, a foreign propaganda front organization, also confirmed the fact in the interview with daily Izvestia in 1992.

The AIDS disinformation campaign was fired in 1983, when a newspaper in India, the Patriot, printed an anonymous letter headlined “AIDS may invade India: Mystery disease caused by US experiments.” The letter, allegedly written by a “well-known American scientist and anthropologist” in New York, claimed that “AIDS…is believed to be the result of the Pentagon’s experiments to develop new and dangerous biological weapons.”

The campaign reopened with an article by Valentin Zapevalov published in the newspaper Literaturnaya Gazeta in 1985. According to the article, the AIDS was made in Fort Detrick lab. Later, the same disinformation was spread in other Soviet editions.

See detailed information on the same topic in the following articles:

Conspiracy theory about the Pentagon

Arno Khidirbegishvili’s claim that in 2017 the Pentagon was collecting biological samples from Russians as well as different ethnic groups and people of the former Soviet Union is a conspiracy theory promoted by the Kremlin.

On October 30, 2017, Russian President Vladimir Putin said that foreigners were collecting biomaterials across Russia. Gennady Onishchenko, head of the Russian State Duma’s Education and Science Committee, stated that collection of biological materials from Russia was part of the U.S. aggressive military program.

Commenting on the matter, Capt. Beau Downey of the U.S. Air Force clarified that the Center for Advanced Molecular Detection was conducting research to identify various biomarkers associated with injury. This required two sets of sample groups — one for disease testing and the other as a control group. The first group of samples, obtained from a U.S.-based firm, was sourced from individuals of Russian descent, Downey explained. “However, to continue the research, similar samples were required,” he added. In other words, the purpose of the research was to ensure the integrity of the study, not the origin of the sample.

See detailed information on the same topic in the article prepared by Myth Detector:

The article is published within the framework of the project #FIGHTFAKE, which is implemented by MDF in cooperation with its partner organization Deutsche Gesellschaft e.V.