Myth, as if the Ngos are against cultural heritage, is groundless 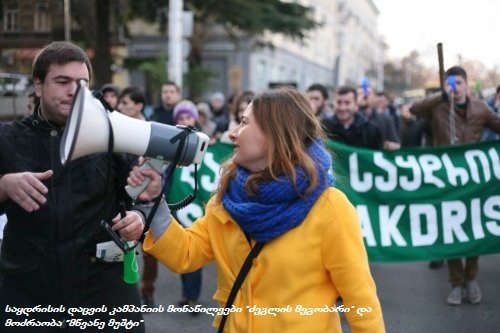 There is a widespread opinion regarding non-governmental organisations,that they are against national values. This view is easily revoked by the number of large scale campaigns that have been organized by NGOs and civic activists for the protection of cultural heritage monuments in Georgia during the recent years. Herewith, these NGOs are undertaking various other important activities with the help of local and international donors.

In response to the concrete cases of cultural heritage damage and the unacceptable decisions threatening the protection of them, a number of campaigns have been organized and several initiatives or campaign groups have been founded in the recent years. The common goal of all these organizations and initiatives is the protection and preservation of Georgia’s cultural heritage for the future generations to come. The most vivid examples of recent public campaigns have been the ones against reconstruction of Bagrati Cathedral, for the protection of Sakdrisi Gold Mine and the one against the project “Panorama Tbilisi”.

ICOMOS Georgia and its members have expressed their protest against the reconstruction works on Bagrati Cathedral endangering its authenticity and the future of the site on the UNESCO World Heritage List. The same organization led active campaigns of raising public awareness and held various activities to strengthen civic involvement in heritage issues. These activities include statements on illegal decisions, international petitions, meetings with the press as well as engagement in and organization of campaigns. Among the recent cases of such activities have been the statements made against construction works ongoing at the world heritage listed sites of Mtskheta, against destruction and damage of a number of monuments in Batumi, against events that took place at the Sakdrisi-Kachaghiani archaeological site,Panorama Tbilisi project or the legislative changes regarding easing procedures for the revocation of monument status.

The latest events have increased the interest of NGOs from other fields in the protection of cultural heritage. For example, Georgian Young Lawyers’ Association (GYLA) was actively involved in the campaign for the protection of Sakdrisi Ancient Goldmine, with whose support it was possible to appeal the concrete violations leading to heritage damage on behalf of the private company and the state before the court of Georgia, thus creating the first precedents for the protection of cultural heritage through court. GYLA with the help of “Open Society Foundations” within its project “support of accountable and transparent governance in Georgia” carried out legal studies related to the events taking place around the Gold Mine and is still litigating the cases in court.

ICOMOS Georgia, together with “Young Psychologists of Abkhazia”, “Georgian National Committee of Blue Shield Georgia” and various researchers has protested against the facts of damage to cultural heritage sites in the occupied territories of Georgia. By informing international professional organizations through such petitions and letters, these groups try to support the implementation of various provisions of international law for the protection of Georgia’s heritage on all of its territories.

A non-governmental organization called “Tiflis Hamkari” has been undertaking active campaigns for the protection of Tbilisi Historic District for the last couple of years. With the help of international donors, such as Eurasia Foundation, Open Society – Georgia Foundation, USAID programme G-PAC and other, they have managed to launch several studies, campaigns and law suits against heritage destruction in Tbilisi and Batumi.

Since the late 1990s, the “Open Society – Georgia Foundation” has been carrying out a heritage programme financing the study, preservation, emergency restoration and promotion of Georgia’s movable and immovable cultural heritage. Besides, on the backdrop of illegal constructions in Tbilisi historic district, in 2001 it financed the very first campaign for its protection called “SOS Old Tbilisi” which was implemented by ICOMOS Georgia.

In the period between the late 1990s until about 2005, a number of projects have been carried out by different NGOs with the support of World Monuments Fund (US). Tbilisi Historic District has been placed on the WMF’s 100 Most Endangered Sites list for three times in 1999, 2000 and 2002, as a result of which the district and its problems received more international attention. It was then, when Tbilisi Historic District was nominated for the inclusion in the UNESCO World Heritage List. One of its quarters – Zemo Kala was included in the World Bank’s Cultural Heritage Initiative as a project site. It also helped ICOMOS Georgia to raise further funds for its campaign “Save Old Tbilisi”.

In 2000, “World Monuments Fund” (US) also funded the study and documentation of Betlemi Quarter after which it attracted further donors like the UNESCO and the Ministry of Foreign Affairs of Norway. The latter donor financed the subsequent community based revitalization project of the district successfully implemented by ICOMOS Georgia. The long term positive results of the project are evident and acclaimed presently.

In the same period, the Jewish Heritage Fund supported the study, project design and emergency rehabilitation of one of the landmark sites in Tbilisi historic district, nowadays the David Baazov Museum of History of Jews of Georgia which had been damaged by Tbilisi earthquake.

Also the emergency works were financed by the “World Monument Fund” (US) after the earthquake in Tbilisi and carried out by NGOs. The same fund assisted in the restoration of Ikorta Church damaged by the earthquake, the Phitareti Church as well as the documentation and study of Jvari (Holy Cross) Monastery in Mtskheta. The necessary financing was provided for the works in Timotesubani and Khintsvisi churches.

Emergency response measures were also financed by the Prince Claus Fund (Netherland) Emergency Response Programme (ERC), such as post-war rehabilitation of the Episcopal Residence in Nikozi, reinforcement of Alaverdi Cathedral against damages caused by floods and conservation of 12-13th century mural paintings in Ikvi Church damaged through heavy rains and flooding.

At the same time, another active NGO, the “Georgian Arts and Culture Center” within the US Ambassador’s Fund for Cultural Preservation grant is implementing large-scale restoration project (architecture, wall painting) in the Gelati Monastery Complex sites.

Over the years, “Georgian Arts and Culture Center” has been implementing projects in the field of traditional crafts development with the help of various international donors. Campaigns aimed at raising awareness on the role of heritage in social and economic development have had an important role.

Within the projects, “Crafts Platform in Action: Enhancing Sector’s Economic Capacity for Georgia”funded by the European Union “Investing in People” programme and “Strengthening Creative Industries in Armenia, Azerbaijan, and Georgia: Heritage Crafts – Common Platform for Development”funded by EU Eastern Partnership Culture programme, an international conference on the topic of heritage economics was organized. Prominent experts from the field of creative industries undertook study visits to Georgia. Besides, these projects support the fields of traditional crafts and intangible heritage, assist the craftsmen through teaching as well as giving out small grants for small business development.

Apart from this, the abovementioned organizations also work in educational field, organizing thematic trainings and workshops for heritage professionals led by experienced professionals from Europe, Japan and the USA. They also support study tours of local specialists abroad, enable capacity building activities parallel to restoration works, such as “Learning by doing”. An important step towards teaching heritage conservation was made by publishing and dissemination of the Georgian version of the internationally developed (by UNESCO and ICCROM) and appraised Teachers’ Manual “Protection of Cultural Heritage Sites and Historic Cities” – Introductory course for secondary schools students.The book has gained popularity among school teachers of Georgia and is being actively used by history, civic education as well as art teachers.

There are approximately 20 organizations out of several thousand NGOs registered in Georgia working on protection of cultural heritage (immovable, movable, intangible). Nearly third of them was established in 1990s and is functioning till now. Others were created more recently. These organizations, in the first years of their existence, managed to raise necessary funds for emergency restoration projects from foreign donors, while the government was unable to allocate any funds for mentioned priority issues. Civil society has become more active in heritage sector since the past 5 years. Emergence of new professional organizations as well as the growing interest in heritage issues of NGOs from other fields such as law, social issues, contemporary art and environment is also evident. It has several reasons:Firstly, facts of damage to or destruction of cultural heritage monuments, violation of heritage principles and relevant legislation occur more frequently. Secondly, more people became aware of importance of cultural heritage and its importance for identity, social cohesion and economic development. Non-governmental groups are engaged in various activities. While some are still providing restoration services, others are dealing with the core issues affecting the current state of Georgia’s cultural heritage, such as legislative discrepancies, ineffective administration system, lack of professionals and the low level of professional education. Thus, they work to provide the state with various policy recommendations and documents on how to improve heritage management, encourage experienced actors from other countries to involve in various projects enabling the changes of best practices and promote public education initiatives in order to protect cultural heritage.

Some of these organizations are more of the “watch dog” character and react immediately when threats to cultural heritage protection occur. They use variety of methods such as media or public campaigns and legal motions, use advocacy skills to lobby heritage protection interests with politicians and protect these interests in courts.

The number of donors interested in protecting cultural heritage is not big and the competition between them is tense. Besides the few donors who directly fund concrete restoration or conservation projects, there are others who prefer to promote cultural heritage as a complex social phenomena. It promotes economic development and civic involvement. Various different projects have been implemented in Georgia by the non-governmental sector in the above-mentioned three areas.