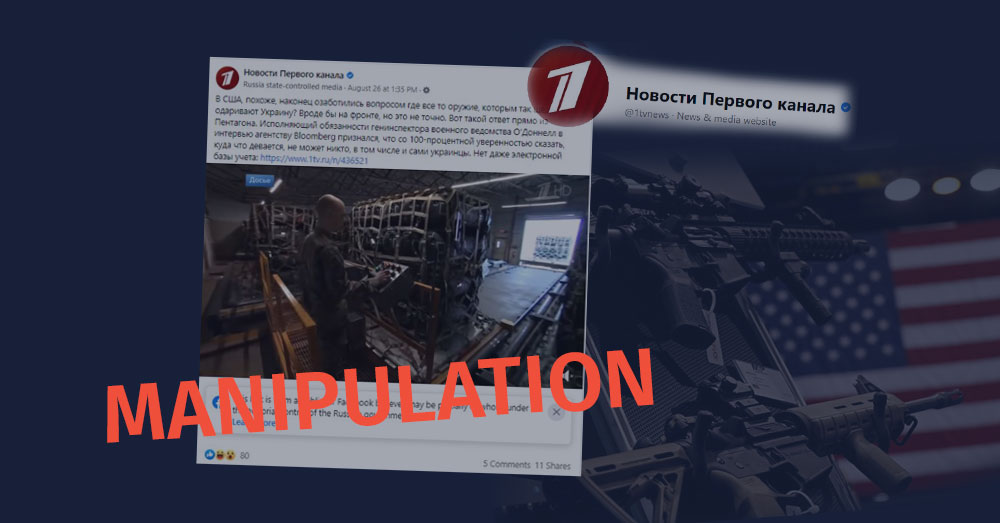 On August 26th, the Facebook page of the Russian ‘Channel One’ published a story claiming that the weapons sent by the US do not reach Ukraine. The story references Sean O’Donnell, Acting Inspector General of the Department of Defense and his interview given to the American publication Bloomberg. According to Russian media, O’Donnell admitted that they, including Ukrainians themselves, cannot say with 100% certainty where the weapons they sent to Ukraine end up. The story quoted an interview in which O’Donnell said NATO officials were confident that security was adequate during the weapons transfer and that, as far as could be told, everything that was supposed to be fired and detonated was in use but added that it would need to be verified through an audit. In another excerpt cited in the story, O’Donnell says that Ukrainian officials record the receipt of weapons on hand-drawn sheets, and it’s all on paper, but he doesn’t believe that once the weapons arrive in Ukraine, they know where they end up. According to the story, the Pentagon talked about the need to study the possibility of weapons entering the black market. The story also mentions a story prepared by American journalists on this topic, which, according to the Russian First Channel, aired on CBS in August, and the journalists found that about 70% of the weapons allocated by the US and Europe do not reach the armed forces of Ukraine and seem to disappear into a black hole. The story was also published on the website of Russian Channel One. 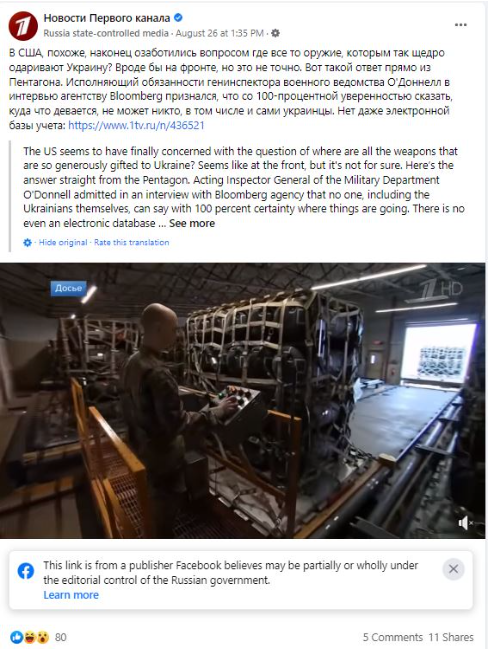 The story prepared by Channel One regarding the aid provided by the US to Ukraine is manipulative. It manipulatively cites only the parts of the Bloomberg interview with Sean O’Donnell that talk about possible breaches and makes no mention of the Pentagon’s measures and improved controls listed in the same article. Notably, the CBS investigation has been corrected since publication. The respondent, who talks about the effectiveness of the supply of weapons to the Ukrainian army in the documentary, clarified his comment and said that he was talking about the problems of distribution between different units of the army, and not about the facts of weapons being stolen or lost.

The August 25th article by Bloomberg notes that the Pentagon’s inspector general will look into possible cases of fraud, restocking losses or black market weapons. In an interview, Acting Pentagon Inspector General Sean O’Donnell said that 7,800 contracts worth up to $2.2 billion were awarded to Ukraine even before the US began transferring advanced technology such as HIMARS missiles to Ukraine.

The investigation is focused on the $26.6 billion in aid allocated by the US Congress to Ukraine since last year and will examine not only the effectiveness of the Pentagon’s system for tracking aid to Ukraine but also the effectiveness of information sharing between US and NATO allies, the training of Ukrainian armed forces, the use of weapons and the possible cases of getting into the black market.

In addition to the quotes used by the Russian Channel One, the article mentions that the Pentagon has detailed measures for weapons monitoring, which include not only the Pentagon itself, but also the European Command of the US Armed Forces and a new Defense Attache Office in Kyiv. As noted in the Bloomberg article, O’Donnell’s team was in Germany in June and discussed the issue with European Command officials.

According to O’Donnell, the Covid-19 pandemic has demonstrated that when the pace of spending in the Department of Defense increases, so does the likelihood of fraud, and as the investigations in Afghanistan and Iraq have shown, effective accounting is essential. Now, he said, data analysts and experts working alongside auditors and investigators are gathering richer data and probing more deeply into the contracting process for possible signs of fraud or other violations of the law.

The parts of the Bloomberg interview where O’Donnell talks about improving control mechanisms were not included in the Channel One story, and only the parts where the inspector general talks about possible violations have been used manipulatively.

The investigation by CBS, which Russia’s Channel relies upon, was published on August 4th. Based on various experts and representatives of organizations and companies involved in the supply of military equipment to Ukraine, it was stated that the part of the military aid allocated to the country may not reach the recipient. However, the Russian story does not say that the material was amended on August 7th. According to an editor’s note, the article has been amended to reflect a change that occurred after CBS filmed the documentary in April. One respondent, Jonas Ohman, founder of the Lithuanian organization Blue-Yellow, which provides non-lethal military aid to the Ukrainian army, estimated in April that only 30-40% of supplies transported across the border reached their final destination. According to the change, Ohman says that the situation has improved since then, and now a much larger amount of supplies are reaching their destination.

Ohman clarified his statements in the documentary with Euromaidanpress. According to Ohman, his statement that only 30% of military aid reaches its destination does not mean that the rest was simply disappearing.

Jonas Ohman: “No, I never meant that some aid was stolen or disappeared. These are words taken out of context. I did not say that and I did not mean that. I said that the efficiency of the support mechanism at that point, in the second month of the war [in April] was maybe 30-40% of what I would like to see. I can give you an example. I know that in many cases aid was not supplied to people directly on the frontline but to other units. There were distribution issues, problems within the system of distribution, problems with logistics. Of course, everybody needs it but who should receive first?”

In addition, the amendment reflects the fact that the US defense attaché, Brigadier General Garrick M. Harmon, who will be responsible for arms control and monitoring, has been working in Kyiv since August. The editor’s note says these corrections will also be reflected in the documentary.

Ukrainian Foreign Minister Dmytro Kuleba, who criticized CBS for spreading misinformation after the film was released, noted that the correction was a first forward, but not enough, as the publication, by spreading baseless accusations, undermines confidence in providing military aid to a country fighting aggression and genocide. According to Kuleba, it is necessary to conduct an internal investigation to find out who allowed such a thing and why.

Mykhailo Podolyak, the adviser to Ukrainian President Volodymyr Zelenskyy, wrote on his Twitter that the accusations about arms ending up on the black market are part of Russian propaganda and the aim is to undermine the support for Ukraine. According to him, even after six months after the start of the war, no proof of such cases can be found.

Peter Stano, Lead EEAS Spokesperson: “[…]from the point of view of the EU, Russian propaganda and disinformation make such attempts very regularly and massively. In fact, all the information that comes out of the Kremlin or from the Ministry of Defense or the Ministry of Foreign Affairs is such massive propaganda and ordinary lies. In parallel with the armed aggression against Ukraine, Russia launched an intensive disinformation campaign directed against Ukraine, against the EU and NATO, trying to justify its criminal attack on Ukraine, mislead public opinion around the world and manipulate the facts since the beginning of this aggression.

Stano also noted that the representatives of the EU do not have any reasons not to trust the Ukrainian government.

Peter Stano, Lead EEAS Spokesperson: “We have established a monitoring and control mechanism to ensure that equipment provided by EU member states is used for these stated purposes. Our aid is subject to strict controls and safeguards, including at the time it has already been delivered. This includes monitoring the use of such equipment, taking into account international norms on compliance with human rights and humanitarian law, as well as the ability to regularly inform and/or check on the spot the current state of this equipment, when it is necessary and when the prevailing conditions allow it.”