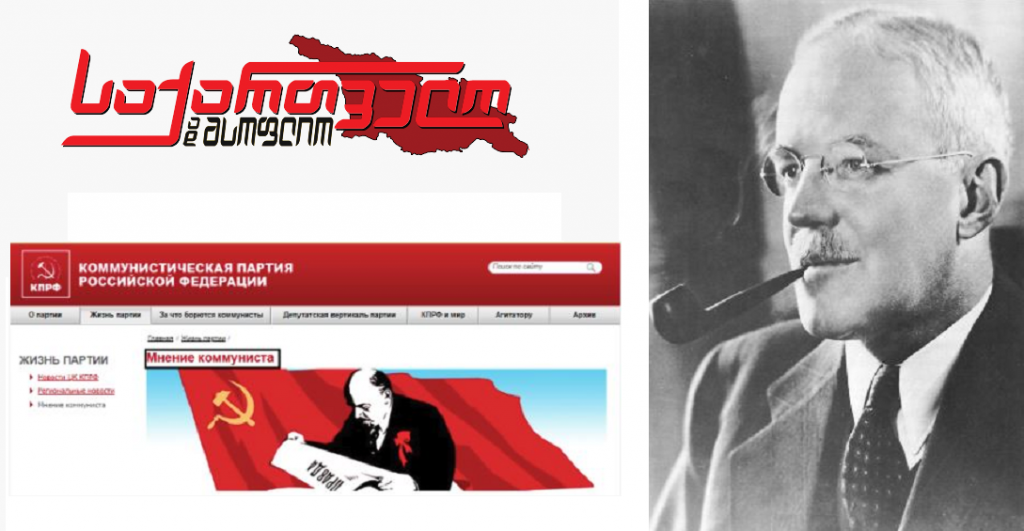 On May 17, Geworld.ge gave new life to the famous conspiracy about Allen Dulles’ Plan. According to this conspiracy, during the Cold War, the Director of the Central Intelligence Agency (CIA), Allen Dulles, created a special plan for destroying Soviet society’s moral values. The article titled “A rise or a fall of Georgians on the Day of Ascension of Jesus” mentions that, in 1947, Allen Dulles presented a secret report to the “congress or senate”. This fact did not go unnoticed for Lavrentiy Beria and soon, the document was present at Joseph Stalin’s desk. The author thinks that the “Dulles’ Plan” was, most likely, the reason behind the start of Cold War between the West and the USSR, as “the iron generalissimo dropped the iron curtain”, effectively preventing the dissemination of sodomy in the Soviet Union. The material shows several excerpts from the “Dulles Plan” as illustrations and mentions that the quotes of Dulles are precisely relevant to the current situation in Georgia, meaning that it does not matter if Dulles’ doctrine is a myth or reality.

There is no such thing as “Allen Dulles’ Plan”. Four quotes given in the article by Geworld.ge are excerpts from an article published on the webpage of the Communist Party of Russia in 2015, whereas one quote is taken from a novel by Anatoli Ivanov – Eternal Call (Вечный зов).

On February 26, 2015, an aspirant of Moscow State University, Mikhail Chistiy, published an article in the section called “a communist’s opinion” on the webpage of the Communist Party of the Russian Federation. The author wrote about a wide-scale informational war waged by foreign and Russian liberal media against Russia. According to him, the liberal-Western propaganda disseminates myths exactly with those methods, prescribed by the Director of CIA, Allen Dulles, in 1945. Mikhail Chistiy reviews the “Dulles’ Plan” in details in the article. One of the quotes can be found both in the article published in the section called “a communist’s opinion” and in Anatoli Ivanov’s novel. In that episode, an SS officer, Lakhnovski, speaks with a hostage, a Soviet officer Polipov, about the importance of using youth in Hitler’s covert plans.

Origin of the Conspiracy. The myths about the so called Dulles Doctrine have originated from Eternal Call, a novel by Soviet writer Anatoli Ivanov. One of the characters of the novel, Soviet officer Polipov was captured by the Fascists during the World War II; he was questioned by SS officer, who turned out to be his old acquaintance – former member of the Imperial Gendarmerie, Lakhnovski . Surprisingly, Lakhnovski discloses Hitler’s secret plans to Polipov. (See a fragment from the book’s online version)

The plan disclosed by Likhnovski to Polipov aims at destruction of Soviet (Russian) people through the fifth column established in Russia. Likhnovski says that they will infringe on historical and spiritual values by joint efforts and grow up individuals, who will violate Russia’s monolithic unity from both inside and outside. Portrayal of Lakhnovski’s monologue as the Dulles Doctrine became popular among Russian politicians, public figures and clerics. In 1993 Metropolitan loann released an article “Struggle for Russia”, which contains a phrase from the novel.

Conspiracy theories about the Dulles’ Plan are still actively discussed in Russian as well as Georgian tabloid media.

See in details on the following links: