German or Russian Granny? Who Collects Wood for the Cold Winter? 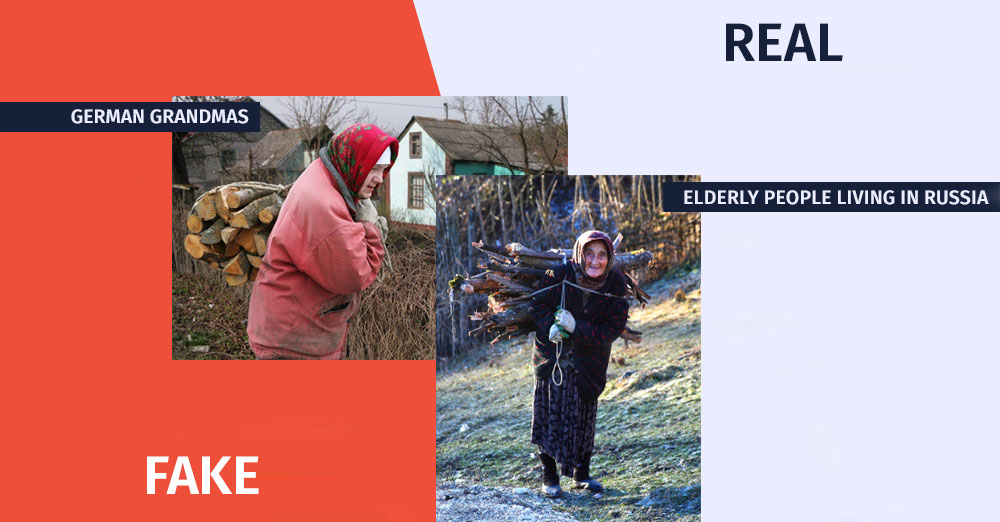 On September 1st, the Facebook page ‘Россия без ценсуры’ [Russia without Censorship] published a photo of an elderly woman with a caption claiming that a German grandmother is bringing home firewood in anticipation of a cold winter. The post also claims that the consumption of gas in Russian villages has increased significantly, and those villages and settlements where gas was not supplied until now will not freeze as opposed to the European population.

In August, other Russian-language Facebook accounts (1, 2, 3, 4, 5, 6) shared identical text with a different photo. 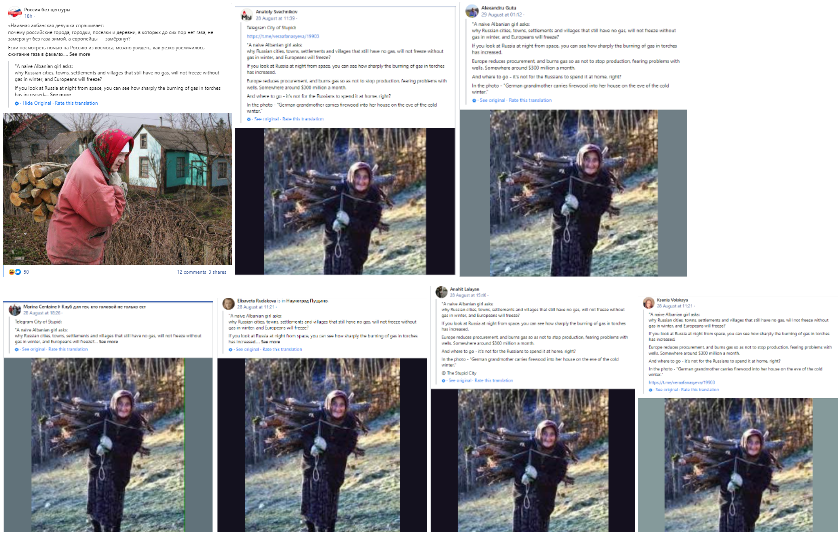 The above-mentioned Facebook posts contain photo manipulation as instead of German grandmothers, they, in fact, show elderly people living in Russia. The purpose of the posts is to emphasize the problems of heating in Germany; however, Russia itself has been facing this problem for a long time, where the elderly in certain regions have to take out loans and use firewood for heating.

The first photo has been circulating on the internet since August 2019. The author of the photo is Stanislav Lomakin, photojournalist of Аргументы и факты [Arguments and Facts], who lives in Kaliningrad.

An article published in August 2019 by Аргументы и Факты, accompanied by a photo of an old woman, has the following title: “Can we get ready for winter in time?” 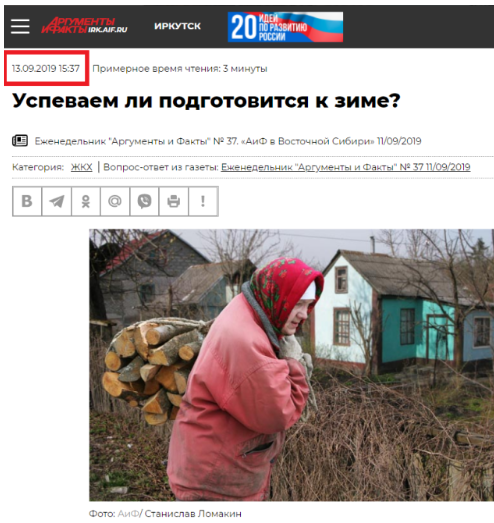 An article published in October 2019 states that due to the cold summer, many pensioners used up their already scarce supply of firewood, as “it is possible to live without bread, but not without firewood”. The article also mentions that thirteen districts of Tver region are not supplied with gas, and the only way to keep the population from freezing in winter is to buy firewood, which costs about 20 thousand rubles. At the same time, pensions are very small, making it difficult for the elderly to provide themselves with firewood. 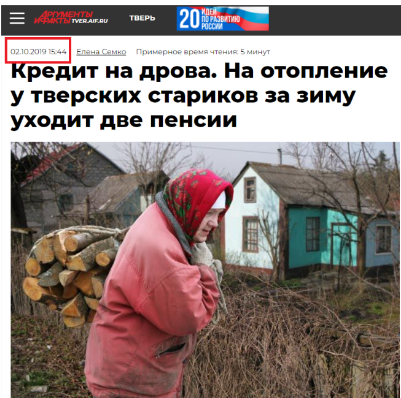 The same photo is used in other articles of Аргументы и Факты. For example, in 2021, an article with a photo of an old woman was published with the following title: “For firewood in the forest. Will they be punished for collecting firewood in the Tver region?” 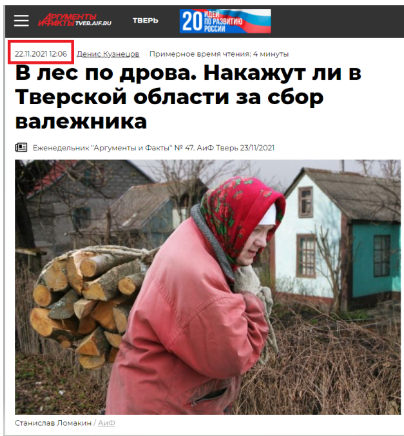 Notably, the author of the photo, Stanislav Lomakin, published the photo of the same grandmother on his personal Facebook page on December 7th, 2017, in the album titled “People”.

As for the second photo disseminated on Facebook, it was taken by Marat Magov in 2018 and depicts not a German pensioner, but an 86-year-old Dagestani woman. 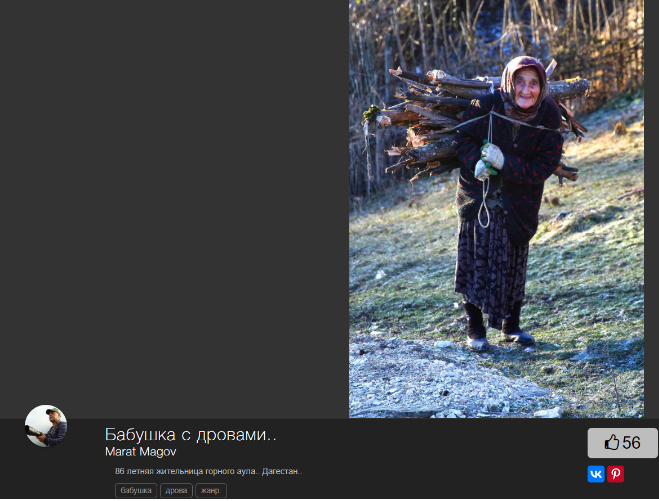 Other photos of the same woman, taken by Marat Magov, can be found on the Internet. The photo series is called “One day from the life of an 86-year-old grandmother”. 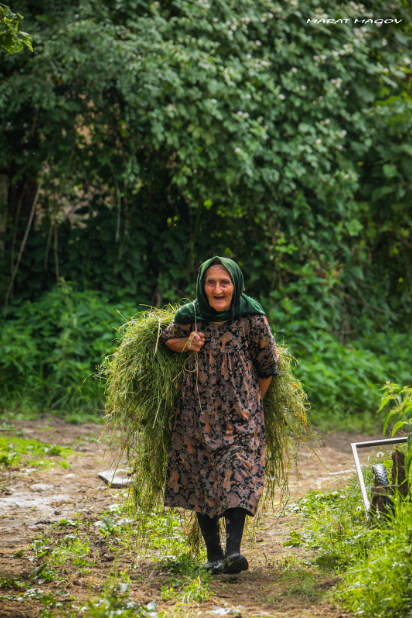 Following Russia’s unprovoked invasion of Ukraine, European countries are struggling to reduce the high costs of replacing natural gas imported from Russia. Rising natural gas prices in Germany are pushing people to look for alternative energy sources. Alternatives include supplying firewood and purchasing wood stoves. According to stove manufacturers, the demand for wood stoves in Germany has doubled compared to last year.

Noteworthy that almost 50% of houses in Germany are heated with natural gas, while around 25% rely on oil heaters. In the past, less than 6% of Germans used wood for heating; however, the number may increase this year. In addition, the increase in the price of natural gas in Germany has also increased the price of firewood. 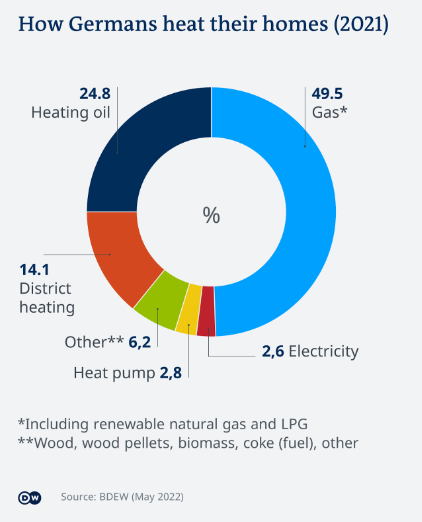 
As for Russia, only around 72% of the country is gasified as of now; hence part of the population still uses firewood and coal for heating. In addition to firewood, certain Russian provinces use electricity for heating, which is also rather unaffordable for the population. In addition, due to old electrical wiring, fires occur frequently in villages. For example, in the Saratov region in 2021, 2 houses burned down due to faulty wiring.

According to Rosstat data, 13% of homes in Russia are not equipped with heating. In some regions, more than a third of households use wood stoves. Firewood is the main source of heat in the Altai and Jewish Autonomous Region. 39% of the population in these areas heats their homes with coal and firewood. In the territory of Buryatia, this indicator is even higher and reaches 40%, and in Baikal, it reaches 50%. It should also be noted that in some regions, for example, in Tuva, 88% of the population uses wood stoves for heating.

The problem of heating in Russia is also indicated by the number of articles published in August-October every year, describing how older people have to take out loans to buy firewood and how difficult it is for the population of the region to survive the winter.