Did Joe Biden Say that He Is Not Interested in Any Nation’s Culture? 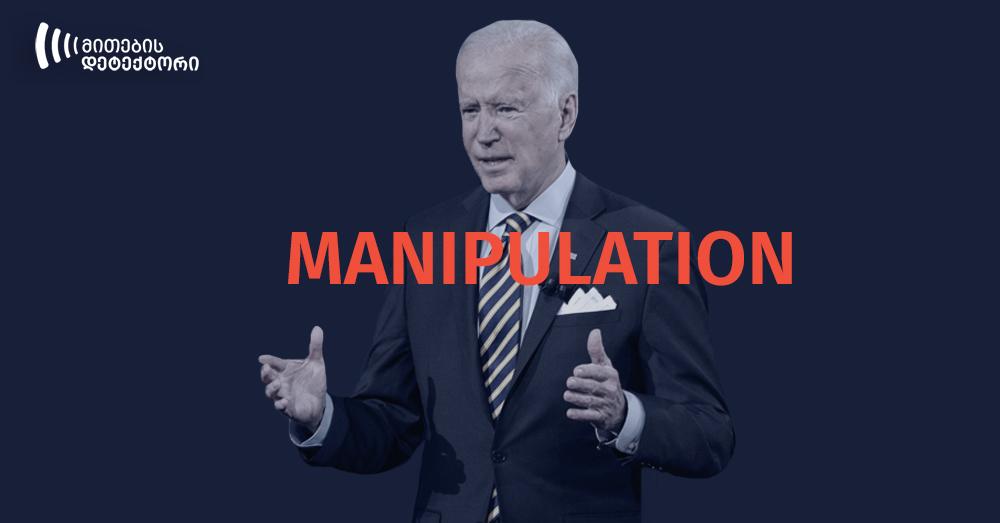 On November 17, an interview with lieutenant general Guram Nikoleishvili, a majoritarian candidate from the Alliance of Patriots of Georgia in the 2020 Parliamentary Elections, was published on the webpage of Georgia and the World. The interview was titled “Guram Nikoleishvili: Victory of Democrats in the U.S.A. means that grants worth millions will again be issued, the ‘third sector’ and the so-called liberal propaganda, which harms the state, will find a new strength.” The article evaluated the meaning of the victory of Joe Biden in the 2020 U.S. Presidential Election for the world and Georgia.

The introduction of the article notes that in 2014 Joe Biden allegedly said that he was not interested in any nation’s culture. Moreover, the author writes that Barack Obama assigned Biden with supporting the rights of the so-called sexual minorities. It is noteworthy that in his interview, Guram Nikoleishvili does not considered the U.S. Presidential Election called and questions the presidency of Joe Biden.

Georgia and the World: “For your information: Back in 2014, the Vice President Joe Biden was saying that he was not interested in any nation’s culture. He was assigned by Barack Obama to assure that the diplomatic services around the world supported the rights of the so-called sexual minorities and to strictly hold those countries responsible that would oppose this process…”

The claim that Joe Biden said that he was not interested in any nation’s culture is a manipulative and misleading interpretation of his statement. In fact, in 2014, Joe Biden said with regards to the protection of the rights of LGBT community that no culture could justify inhumanity, without pointing out any disinterest in cultures of nations: “I don’t care what your culture is. Inhumanity is inhumanity is inhumanity. Prejudice is prejudice is prejudice.”

On June 24, 2014, the White House hosted the first-ever Global Lesbian, Gay, Bisexual, and Transgender (LGBT) Human Rights Forum, bringing together the faith community, private sector, philanthropy, HIV and other health advocates, LGBT activists from around the world, and the broader human rights community to discuss how to work together with the U.S. government and others to promote respect for the human rights of LGBT individuals around the world.

Joe Biden, then Vice President of the United States, made a speech at the Forum. He indeed addressed the guests with the words “I don’t care what your culture is”. However, an explanation followed these words that made clear, why he was not interested in their culture. Biden noted that inhumanity was inhumanity and it could not have been justified with culture.

Dissemination of the interview on social media

The interview, published on the webpage of Georgia and the World, had eight shares as of November 20.

The interview has also been shared by a Facebook page „სტალინი“ (Stalin).