Why did Charles de Gaulle Confront Walter Hallstein and Why does Politicano Link EU to Nazism? 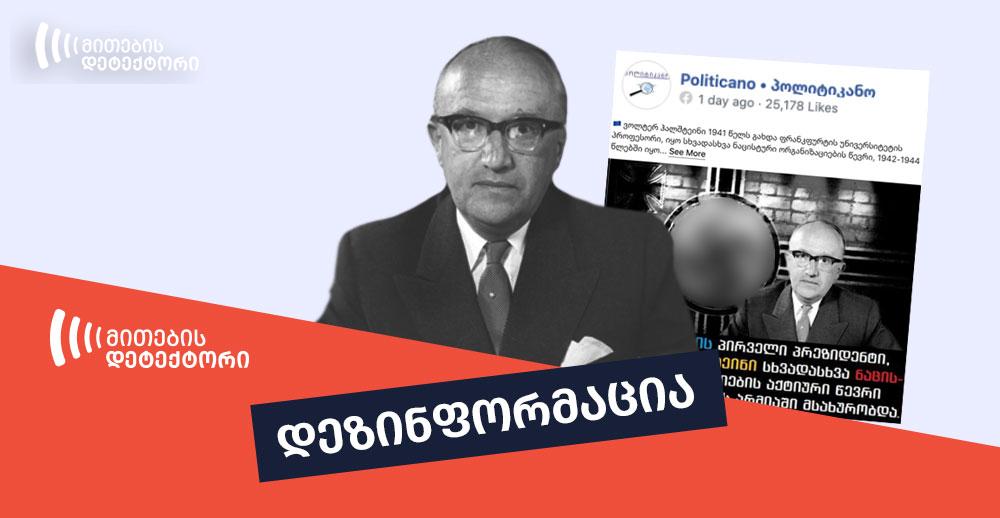 On March 19, Facebook page Politicano published a photo depicting German academic and diplomat, Walter Hallstein with a Nazi symbol and a caption: “Walter Hallstein, the first President of the European Commission, was an active member of various Nazi organizations and served in Hitler’s army.” According to the post, in 1942-1944, Hallstein served as a lieutenant in the Nazi artillery division, Wehrmacht. Politicano also writes that Charles de Gaulle forced Hallstein to resign as the Chairman of the European Commission in 1967, because he hated former Nazis. The post is accompanied by hashtags: #ევროკავშირი#ევროკომისია#ნაციზმი#მესამერაიხი. (#EuropeanUnion#EuropeanCommission#Nazism#ThirdReich). 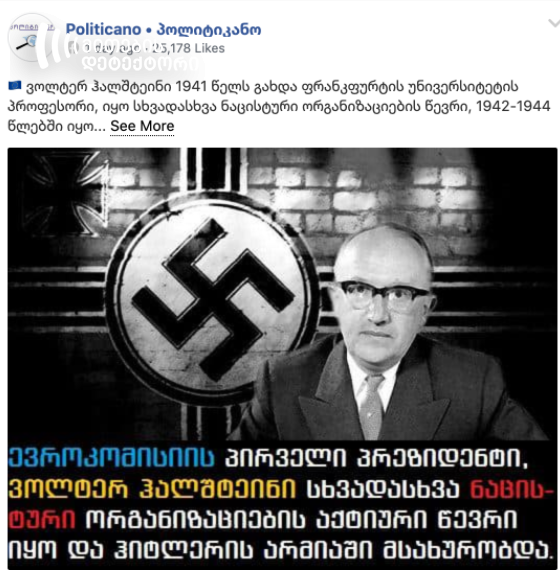 Politicano admits in its Facebook post that Hallstein had never been a member of the Nazi party, but simultaneously notes that “this fact is used by Europhiles to ‘whiten’ his black past” and that Hallstein had been member of various Nazi organizations. Politicano does not specify which particular organizations it is talking about. Various conspiracy theories about Walter Hallstein were spread in both Georgian and foreign sources in the past. One of such conspiracy theories claims that Hallstein was a member of the Association of National Socialist German Lawyers founded in 1933, immediately after the Nazis seized power. In 1936 it was converted into the notorious Nazi Association of Law Protectors. According to the conspiracy theory, membership of this organization was restricted to those individuals showing uncompromising support for, and participation in, the implementation of Nazi ideology. According to the same conspiracy theory, in a memorandum sent by Hallstein to the representative of the Nazi government at the University of Rostock in Germany in 1935, Hallstein stated he was a member of both these organizations.

Although the National Socialist Association of University Lecturers had doubts about Hallstein’s ideological loyalty, he became a professor of law at the University of Frankfurt in 1941.

Eugen Gerstenmaier, resistance fighter in the Third Reich and later member of the Christian-Democratic Union of Germany, recollected in his autobiographical book that after signing a petition critical of the Nazi regime, under the academic discipline procedures, his case was considered by a three-member council with Hallstein being among them. Gerstenmaier noted that he was acquitted largely due to a young professor, Hallstein, who proved to be the best negotiator and whose thinking had nothing to do with the regime.

According to the European Parliament’s European Union History Series, Hallstein made some practical and ideological concessions during the Third Reich, to retain his university positions and safeguard the possibility of pursuing his scholarship. After the war, Hallstein passed through the American denazification process without any evidence of involvement in Nazi crimes or other misdeeds.

1942 Hallstein was called up in WWII. He served in an artillery regiment in Northern France with the rank of first lieutenant. In 1944, he was captured by the Americans and sent to a prisoner-of-war camp in Mississippi, where he stayed until the end of war. As a German prisoner of war in the United States, Hallstein started a “camp university”, where he held law courses for the prisoners.

Upon his return to Germany in 1945, he campaigned for Frankfurt University to be re-opened, becoming its professor and later the rector. Hallstein’s excellent diplomatic skills, awareness of the need for European unity and his specialized knowledge and experience in the field, led Konrad Adenauer, then Chancellor of Germany, to appoint him as head of the delegation leading negotiations at the Schuman Conference on the forming of the European Coal and Steel Community (ECSC) in 1950. The ECSC was to develop into the European Economic Community, and later the European Union.

In 1958, during the conference of foreign ministers, Hallstein was chosen as the first President of the European Commission. He served on the post until 1967. The commission involved six countries, including France, Italy, West Germany, Luxembourg, Belgium and Netherlands. The Commission aimed to develop common policy in the spheres of trade and agriculture.

Hallstein resigned following the so called Empty Chair Crisis that erupted in 1965. Hallstein developed a proposal of a supranational common agricultural market, independently financed and controlled. French President De Gaulle was against the idea and France’s chair in the Council remained empty for several months. De Gaulle criticized Hallstein for having prepared his budgetary proposal without prior consultation of the governments of the Member States. Ultimately, the compromise was reached as the Member States received an informal veto right when a majority decision might affect crucial national interests.

After returning to the commission sessions, the French Foreign Minister called for Hallstein’s replacement. His term in office expired in 1966, but he retained the post as acting chairman until his successor was elected.

In his memoirs, De Gaulle criticized Hallstein for acting as the head of state and being a proponent of a federal Europe. De Gaulle wrote that it went against the goals he had set in respect of France.

According to EU vs Disifno, a myth about Hallstein’s links with Nazism was also spread by Czech media outlets.

It is not the first time Politicano linked Hallstein and the European Union to Nazis. Earlier, Politicano referred to a pro-Kremlin non-governmental organization as its source. It is noteworthy that the President of this NGO, Konstantin Malofeev is Russian oligarch having close links with Russian President and associated with separatist activities in Donbas.

Facebook page Politicano is a medium with links to Yevgeny Primakov Russian-Georgian Public Center. Among the events organized by Politicano, two public lecturers were held at the Primakov Center in 2015 and 2016.

The Primakov Center was founded by the Gorchakov Fund established by the Russian President’s decree, as well as the Georgian Institute of International Relations.