Who Spends More in Georgia – Russians or Europeans?

On 8 July, the news website of Imedi TV – Imedinews – published information titled “Which Country’s Citizens Spend More Money in Georgia”. The article discussed the statistical data on international visitors as of the first quarter of 2018, disseminated by the National Administration of Tourism. The material includes a table depicting international visitors’ spending in Georgia. According to Imedinews, out of the neighbouring countries, Russian residents have the highest average expenditure per each visit amounting to GEL 1,338. Imedinews cited the Georgian edition of Forbes as the original source of information. 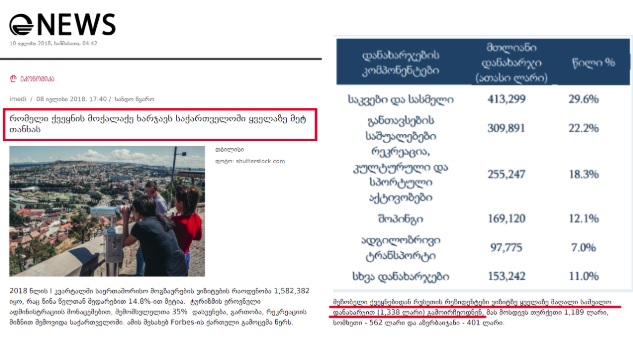 The material and title of Imedinews.ge is misleading and contributes to establishing incorrect impression as if Russian citizens spend the most money in Georgia. According to the report of the National Administration of Tourism, the highest average spending is attributed to Central and Eastern European countries. This information is given in the table incorporated in the report and is omitted in the material of Imedinews.

The report posted on the website of the National Administration of Tourism of Georgia that discusses the characteristics of visits made to Georgia by international visitors as of the first quarter of 2018, is based on the data of the National Service of Statistics. According to the report, the total expenditure of international visitors amounted to GEL 1.4 billion in the first quarter of 2018 and average expenditure per visit amounted to GEL 1,060.

Average expenditure per countries is given in table no. 5, according to which, the highest indicator in this regard is attributed to Central and European countries, amounting to GEL 2,461. Russia is on the fourth place (see table no. 1). However, the material of Imedinews.ge titled “Which Country’s Citizens Spend More Money in Georgia” does not include the table with these indicators.

The material refers to the average expenditure only by neighbouring countries’ citizens, where Russia is the leader. Unlike Imedinews.ge, the table is given in the material posted on Forbes.ge cited as the original source. Source: The National Administration of Tourism of Georgia

Table 1.  Highest Expenditure Per Countries from Higher to Lower

It should also be mentioned that according to the very text of the National Administration of Tourism, information about average expenditure given in a chapter about expenditure by international visitors only refers to neighbouring countries.