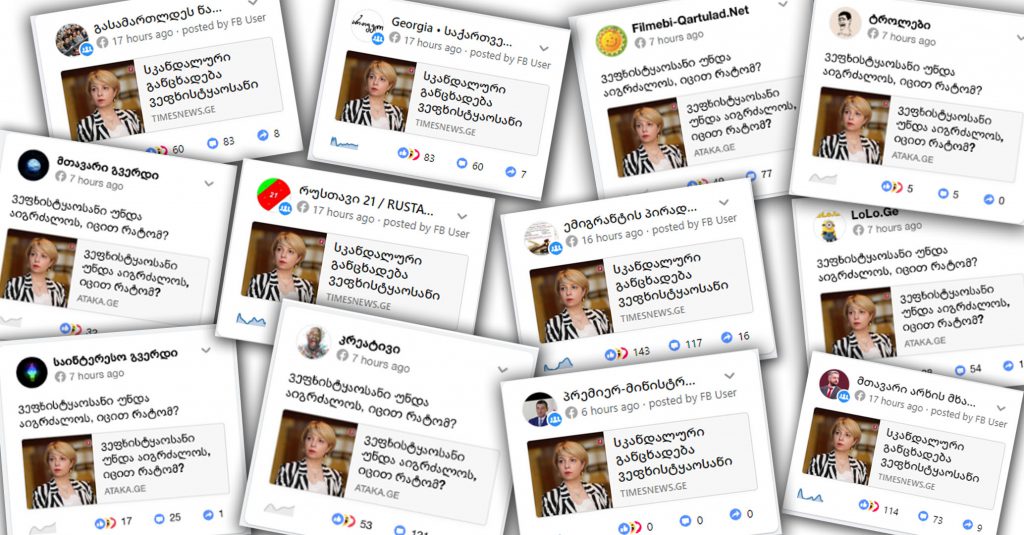 On June 11, Facebook pages and groups spread a fake screenshot of on.ge’s article headlined “The Knight in the Panther’s Skin is a racist poem and should be banned, because it frequently uses the words ‘Negro slave’.” The screenshot involves Public Defender Nino Lomjaria’s photo and the quotation is just ascribed to her. 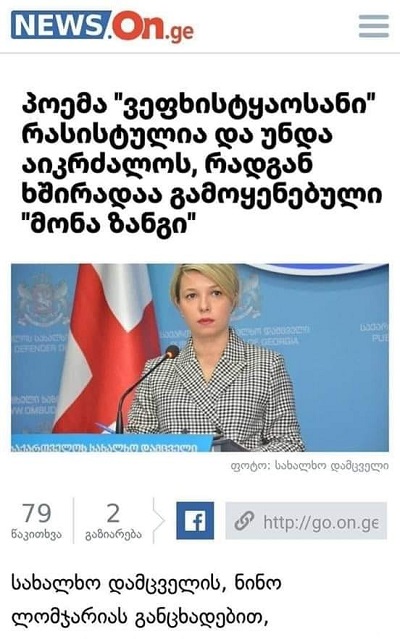 Facebook profile “მრისხანე. ბაბუაწვერა” was the first to publish the screenshot at 9:51am on June 11. The profile hides its identity and indicates on.ge’s editorial board as a workplace. The post published by the Facebook account was satirical and it simply aimed at responding to the decision by Netflix to temporarily pull the film Gone with the Wind from its roster. Later the joke went viral on Facebook as the Public Defender’s real comments and certain online platforms immediately picked it up. 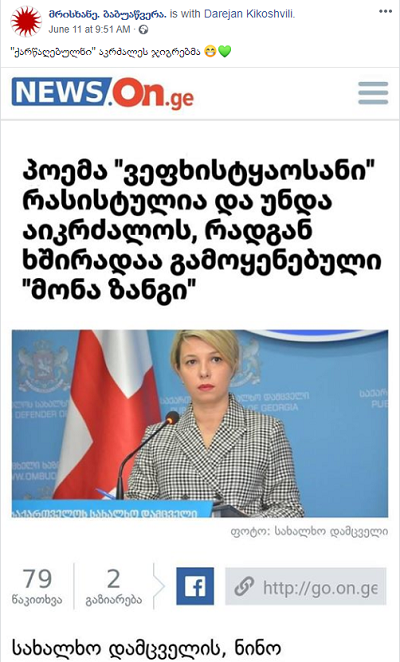 On June 11, an online edition timesnews.ge published an article headlined “Scandalous statement: The Knight in the Panther’s Skin is a racist poem and should be banned.” The article was accompanied by a screenshot published by Facebook user Tamazi Tamaziko, involving Nino Lomjaria’s fake quotes. On June 12, a website ataka.ge also published an article with a fake screenshot headlined “The Knight in the Panther’s Skin should be banned and do you know why?” The same article was later shared by six Facebook pages: ტროლები, მთავარი გვერდი, საინტერესო გვერდი, LoLo.Ge, Filmebi-Qartulad.Net and კრეატივი. 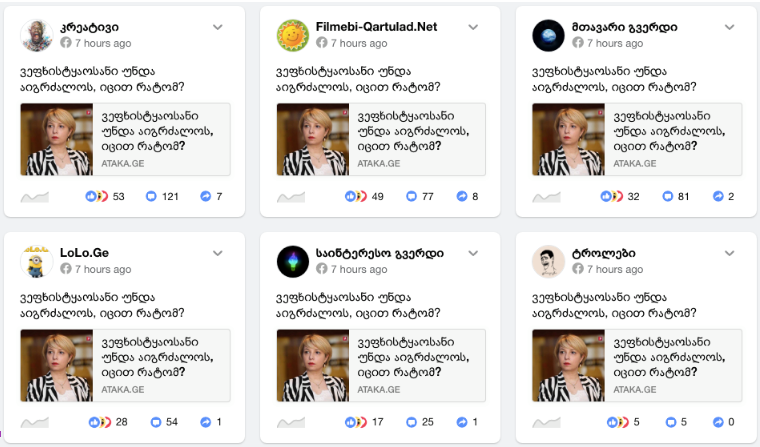 The fake screenshot was also shared in various Facebook groups, among others “ჩემი საქართველო – აქ არის!!!” (My Georgia is Here!!!). As for the article published by timesnews.ge, it was shared 35 times in about 20 groups on June 11-12. According to CrowdTangle, the articles published by timesnews.ge and ataka.ge were shared on Facebook pages and groups 41 times and have over 3,400 interactions.

It is worth noting that Irakli Jankarashvili, one of the writers for News Front Georgia and tvalsazrisi.ge, also shared the screenshot in pro-government groups through his Facebook account “ირაკლი ირაკლი”. Jankarashvili shared the screenshot of on.ge’s fake article in the following groups: “კახა კალაძე თბილისის მერი” (Kakha Kaladze Tbilisi Mayor), “პრემიერ-მინისტრი გიორგი გახარია” (Prime Minister Giorgi Gakharia) and “ამხილე პორტირებული ნაცები !!” (Disclose the Ported Natsis!!). Irakli Jankarashvili runs the page Antiliberal Doctrine, which is among those pages that published the fake screenshot of the comments allegedly made by Nino Lomjaria. Based on open source information, the Myth Detector has analyzed the pages run by Irakli Jankarashvili as well as the platforms associated with him. 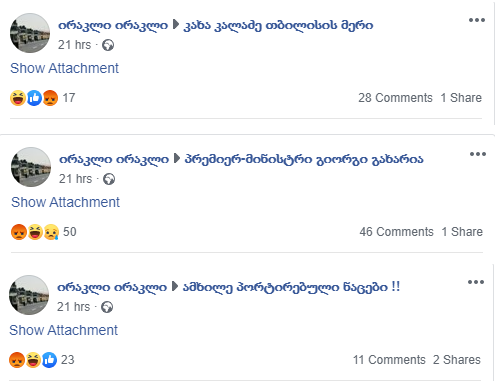 Nino Lomjaria published a post on her Facebook page, clarifying that it was fake news and that she has made no such statement. 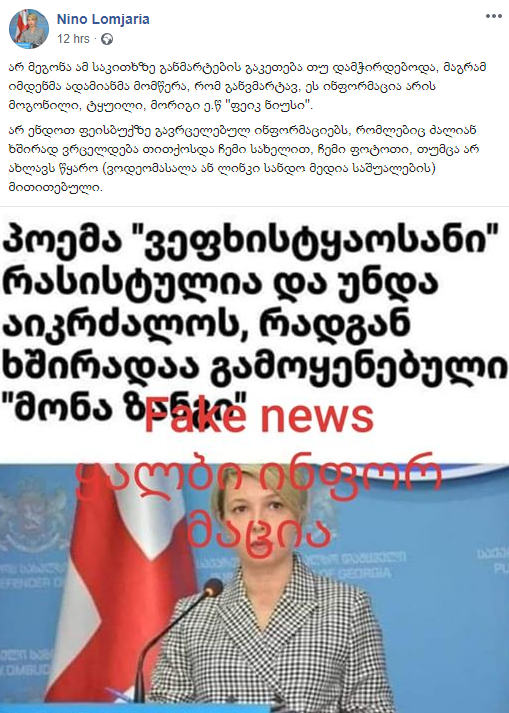 ataka.ge and timesnews.ge are the websites, which published the fake screenshot of Nino Lomjaria’s quotes as an article. The articles of precisely these two websites went viral on Facebook.

According to Whois, ataka.ge was created on June 6 and it mainly spreads news with sensational headlines.

As for timesnews.ge, it was created on July 2, 2019. Timesnews.ge is owned by Giorgi Melikidze, who is also featuring as a partner in the company WOM that is a legal name of timesnews.ge. According to the public registry, the organization was founded by Koba Vasadze on April 7, 2015; later on December 13, 2016, Koba Vasadze transferred 40% of his shares to Giorgi Melikidze free of charge. In addition, Giorgi Melikidze serves as the director of GM Corporation LLC. He also owns a web portal abcnews.com.ge that was actively spreading disinformation about coronavirus. 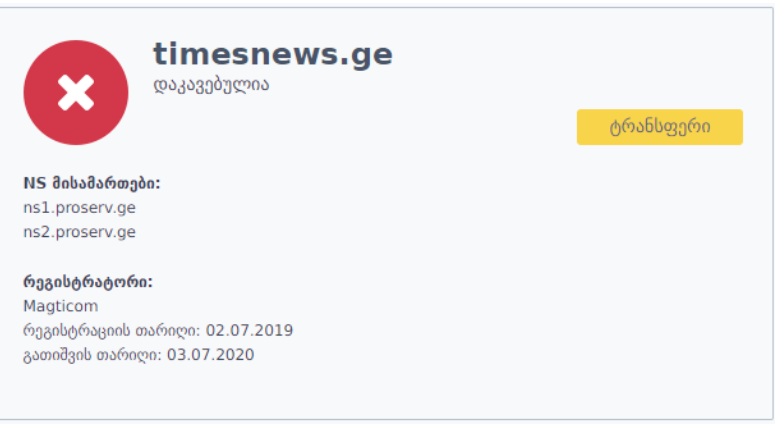 The Myth Detector has verified fake news spread by timesnews.ge earlier. See fake and manipulative articles with timesnews.ge featuring among the sources: