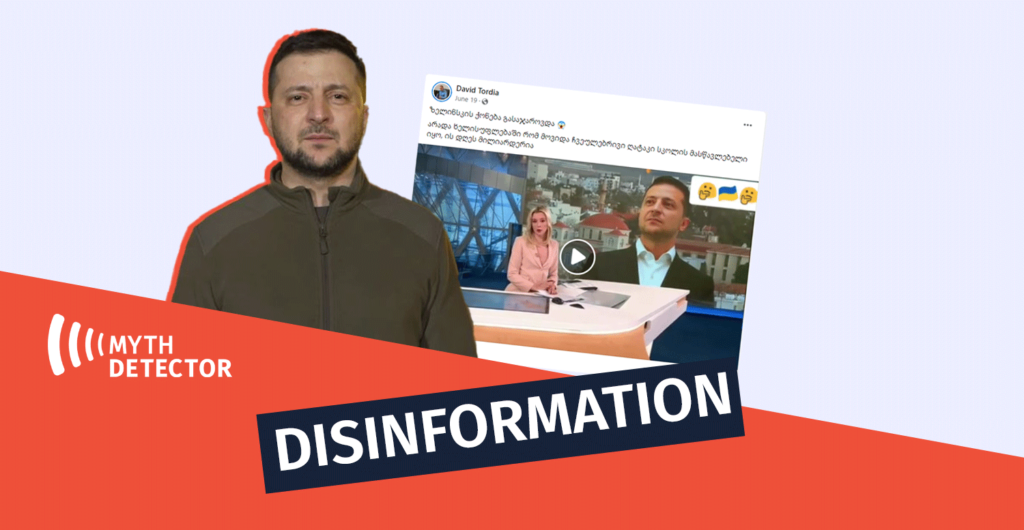 On June 19th, 2022, a Georgian-language Facebook user published a fragment of the story by “Channel One” of Russia, which concerns the net worth of the President of Ukraine, Volodymyr Zelenskyy. According to the author of the post, Zelensky was “an ordinary poor school teacher”, and after coming to power, he became a billionaire. In the story of Channel One, it is also mentioned that Zelenskyy and his family members own real estate in Italy, Great Britain, Cyprus, the US, Israel, Russia and Georgia. 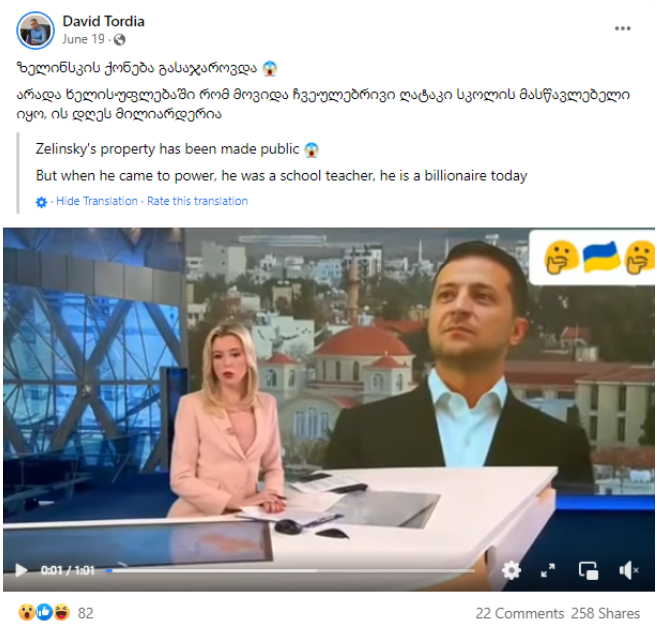 The disseminated post contains a false statement regarding the net worth of the President of Ukraine. Volodymyr Zelenskyy’s net worth is estimated at around 20-30 million dollars, not several billion, which is largely connected to the company Kvartal 95, founded by Zelenskyy. The largest part of Zelenskyy’s wealth and income is related to his past activities in the entertainment industry.

Before being elected as the President of Ukraine, Volodymyr Zelenskyy had a successful career in the entertainment industry. The largest part of his property and income is related to the activities of this period. A post on Facebook gives the impression that Zelenskyy has accumulated wealth after becoming president, which hints at corruption.

In 1997, Zelenskyy formed the Kvartal 95 team of the KVN club, on the basis of which, a few years later, the company of the same name was created. In Kvartal 95, Zelenskyy owns a 25% share, which was transferred to his partner after becoming president; however, according to Forbes, it is likely that this share will return to Zelenskyy after the end of the presidential term. Zelenskyy’s royalties from projects related to the entertainment industry are declared and publicly available. Kvartal 95 owns the popular comedy series Вечирний квартал (“Evening Quarter”), Свати (“Wife’s Parents”) and Слуга народу (“Servant of the People”). Among them, “Servant of the People” is the most famous. In this series, Zelenskyy plays the role of a history teacher who becomes the president of Ukraine and begins to fight corruption in the country. The series ran on the American streaming service Netflix from 2017 to 2021, and the company reacquired the distribution rights to the series in March 2022. The annual income from the distribution of the series is estimated at about 30 million dollars, of which, according to Forbes Ukraine, Zelensky’s share is 11 million dollars.

According to Forbes Ukraine estimate, Zelenskyy’s fortune is about 20 million USD (in addition, according to Forbes US, Zelensky’s fortune does not exceed 30 million USD). The website Celebrity Net Worth also estimates Zelensky’s net worth at USD 25 million. Both Forbes and Celebrity Net Worth name Kvartal 95 as the main source of the president’s income.

The real estate owned by Zelenskyy is estimated by Forbes at 4 million USD. This property includes 2 apartments that Zelenskyy owns outright, 2 more apartments that he co-owns, commercial real estate and 5 parking spaces. The publication notes that Zelenskyy owned a villa in Italy in 2019; however, according to his declaration, Zelensky sold the villa, as well as a plot of land and 5 hotel rooms in Georgia in 2020. Income from the sale of real estate has also been declared.

Notably, in 2021, the organization “Organized Crime and Corruption Research Project” (OCCRP) published an article based on the Pandora Papers, according to which Zelenskyy and his close circle own a network of offshore companies in the British Virgin Islands, Cyprus and Belize. The OCCRP also notes that these offshore companies have bought expensive properties in London. According to the OCCRP article, the offshore companies were formed before Zelenskyy became president in 2019 and are also linked to Kvartal 95. in addition, the article does not indicate that Zelensky was actively involved in the activities of offshore companies or luxury real estate after becoming president. Following the release of the Pandora Papers, Ukraine’s president denied the fact that offshore companies were being used for money laundering, noting that during the rule of President Viktor Yanukovych, it was typical for media-related businesses to establish companies abroad, and this created a way to avoid political influence. It is worth noting that the ОCCRP investigation does not claim that Zelensky is hiding billions of assets.

Various false and manipulative information about the wealth of Zelenskyy has been disseminated more actively after the full-scale invasion of Ukraine by Russia. The discreditation campaign exaggerated Zelensky’s wealth to several hundreds of millions and billions, claiming that he had accumulated this wealth through corrupt means after becoming president. Various media outlets and fact-checking agencies, including Forbes, Reuters, Factcheck.org, PolitiFact, and StopFake, have verified false claims about the Ukrainian president’s wealth at various times.