What does the Video Shared by a Religious Account Showcase? 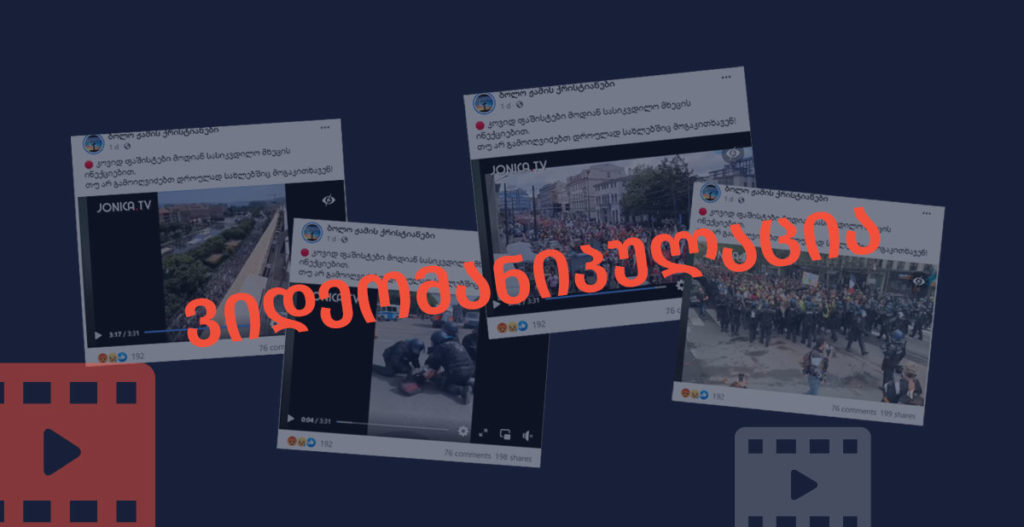 On August 9th, the Facebook user “Bolo Zhamis Kristianebi” published a video claiming that it showcases the forceful vaccination of people. The description of the video states that “COVID-fascists are coming with the deadly injections of the beast,” and if society does not awaken anytime soon, they will reach their homes. 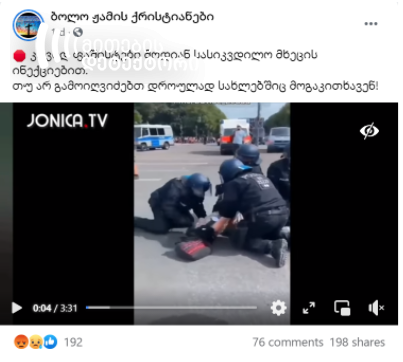 The video is being circulated using a false description, as the author of the post artificially links the video content with forceful vaccination. In reality, the video showcases the worldwide demonstrations against COVID vaccines, “vaccination passports,” and restrictions related to the pandemic and has nothing to do with the forced vaccination.

The video collage belongs to the Italian media outlet Jonica TV, which shares several anti-vaxx content on a regular basis. Nonetheless, the description of the video does not indicate that the people showcased in it are being vaccinated against their will. The video description states that the video showcases an attack on freedom and illuminates the catastrophes happening in Germany. 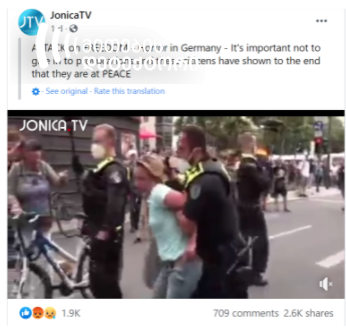 In reality, the video includes footage not just from the demonstration in Germany but also from France and Poland. The videos even include moments when the police arrest the participants, but none shows people being immunized by the police against their will.

The first part of the video involves footage where the police arrest people by force. The video was recorded on August 1st in Berlin, Germany, during a demonstration. On July 31st, 2021, the Court of Berlin issued a ruling regarding the prohibition of mass gatherings on the weekends. The following day, the biggest anti-restriction union “Querdenker” still decided to organize a large-scale protest.  According to the German police, more than 5000 participants attended the demonstration and even insulted the police. The gathering was dissolved, and more than 600 people were arrested. The video of Jonica TV showcases this specific event.

The movement “Querdenker” unites people with different values and points of view, including the anti-vaxxers, pandemic deniers and far-right activists. It is essential to mention that disinformation about the death of one of the participants (the woman in the very first scene of the video) was spread; however, the German police denied the claim.

Another fragment of the video showcases the demonstration against COVID vaccinations and the so-called “vaccination passports” in Paris, France, on August 7th.

Another French demonstration held in the city of Nice on July 31st, 2021, has also ended up in the video of Jonica TV. 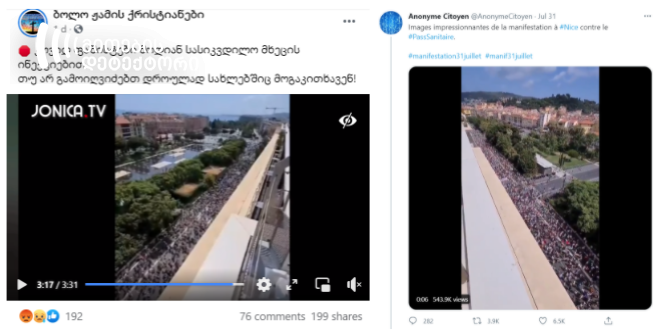 One of the scenes in the video shared by the account “Bolo Zhamis Kristianebi” shows another demonstration held in the Polish city of Katowice. The participants protested the “staged pandemic,” “COVID-dictatorship,” and vaccination.