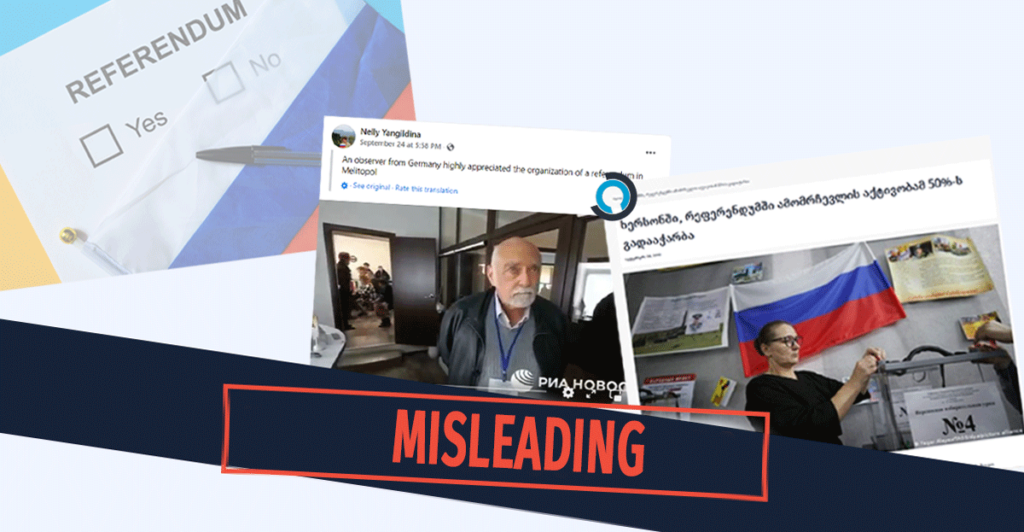 On September 24th, Georgian-language Facebook accounts started disseminating similar information, claiming that the German international observer, executive director of Energie Waldeck-Frankeberg, Steffen Bruno Schaller assessed the referendums and said that “everything was very transparent and very well organized”. The post is accompanied by a video of a story by the Russian state-owned media outlet Ria Novosti. In a comment to RIA Novosti, Schaller notes that the population was not under pressure during the voting process. The same video was also distributed by Russian-language Facebook accounts as well (1,2,3,4,5,6,7). 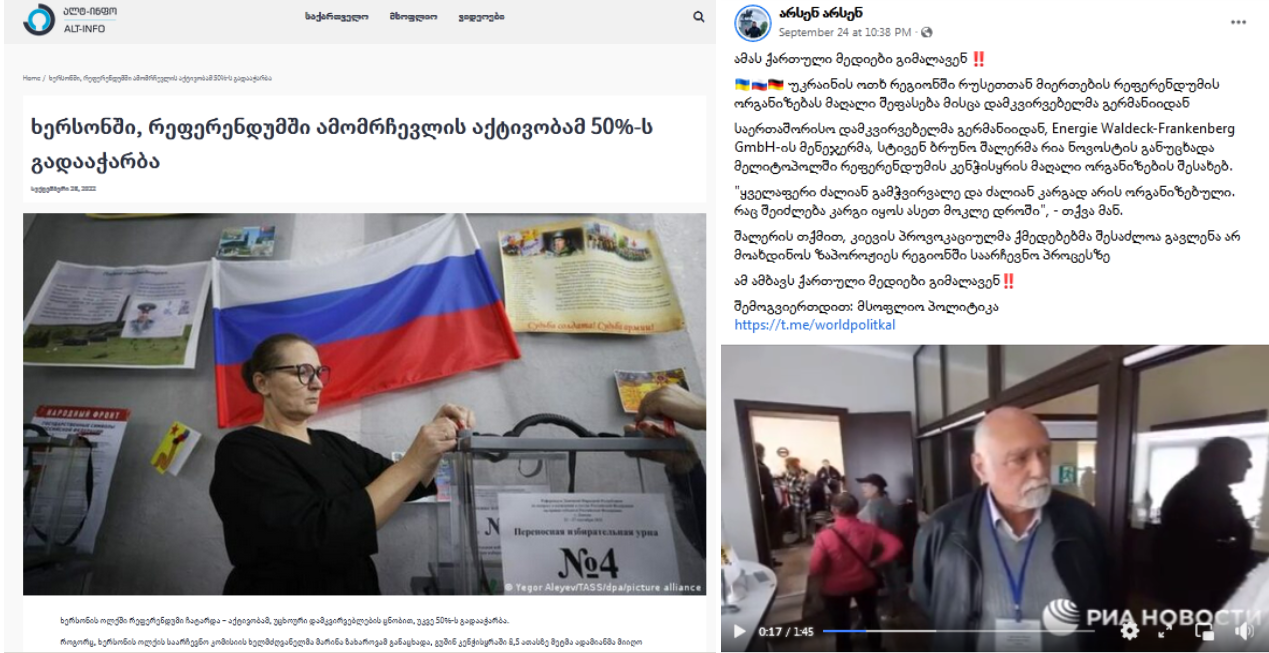 The so-called referenda held in the temporarily occupied territories of Ukraine were critically assessed by the representatives of international organizations and individual countries. For instance, the National Democratic Institute (NDI) has condemned the so-called referenda, noting that they violate the rule of law and all the international standards of holding free and fair elections. The statement issued by the NDI notes that:

In addition, as a member of the Organization for Security and Co-operation in Europe (OSCE) and the Council of Europe (CoE), Ukraine is obliged to conduct referendums in accordance with international standards, which entails respecting fundamental human rights, ensuring the ability of a secret and free voting process, media freedom, the existence of the non-partial elections body, ensuring the presence of international and local observers and the ability to appeal the results of the referendum. NDI notes that None of these structural features is in place in any of the four regions, and hence the proposed referendums cannot meet international standards for credible elections.

The intent by the Kremlin to organize the so-called referendums was condemned by the OSCE as well. The statement of OSCE notes that “Any elections or referenda on the territory of Ukraine can only be announced and conducted by legitimate authorities in compliance with national legislation and international standards. Therefore the planned “referenda” will be illegal.”

The results of the referenda will not be recognized by the West as well. The statement issued by U.S. President Joe Biden states that the country will work with its allies and partners to impose additional swift and severe economic costs on Russia.

The voting in the temporarily occupied regions of Luhansk, Donetsk, Zaporizhzhia and Kherson took place on September 27th. However, the door-to-door voting will last a couple of days more. While speaking to international media, the locals say that the voting process is being carried out under the supervision of armed personnel. In an interview with the Guardian, the residents of Kherson recall that no active campaigning took place prior to the referendum, and many people do not even know where to go to vote. One of the respondents told the Guardian there is no point in voting as the results are already pre-planned. In an interview with the BBC, a resident of Enerhodar stated that they had to answer verbally, and the soldiers would mark the answer on the sheet and keep it. A Melitopol resident told the BBC that two local “collaborators” arrived with two Russian soldiers at her parents’ flat, to give them a ballot to sign. The family asked what would happen if they voted against joining Russia, they did not receive the answer, but the family feared that they would become subjects of persecution. There is also video footage disseminated on the internet, where one can see an armed man following the door-to-door ballot boxes, indicating that the illegal referendums are being carried out under the psychological pressure of the voters.

Steffen Schaller, the international observer who was in the forefront of the Russian media, was the executive director of Energie Waldeck-Frankeberg. After it became known that he had come to the occupied territories of Ukraine to observe an illegal referendum, Schaller was removed from the position. It should be noted that he took a leave of absence to observe the referendums, and he was not serving as a representative of any official organization or agency at the referendum.

The decision to dismiss Schaller was made unanimously by the supervisory and board of directors of the company on September 26th. The Chairman of the Supervisory Board, Jürgen van der Horst said that the behavior of the CEO violates the worldview, moral values ​​and philosophy of the company, and any violation of the company’s international norms and violence is unacceptable. Jürgen van der Horst also noted that against the backdrop of the energy crisis in Germany, the arrival of the director of the German energy company as an observer in the referendum is unacceptable, and the company has received many critical comments from the public.

While speaking to the Russian media, Schaller assessed the referendum positively. After criticism of his actions, he mentioned to Tass that his company was now under pressure. However, he told the German media that he regretted going as an observer and that it was a thoughtless act on his part.

Schaller’s arrival as an observer at the illegal referendums was criticized, and his dismissal from the post was positively evaluated by the leaders of the regional parliamentary groups of Social Democrats, Christian Democrats, Free Democrats, Greens and Free Voters in Germany.