On June 28th, the Facebook page “Global Politics” published a post about the Ukraine-related statements by the NATO Deputy Secretary-General Mircea Geoană. According to the post, Geoană said in an interview with European Pravda on June 27th that NATO’s task is not to help Ukraine and the Alliance has no obligation to help Ukraine. According to the post, Geoană also denied Kyiv’s allegations of insufficient aid, noting that the Alliance does everything possible to prevent a war with Russia. 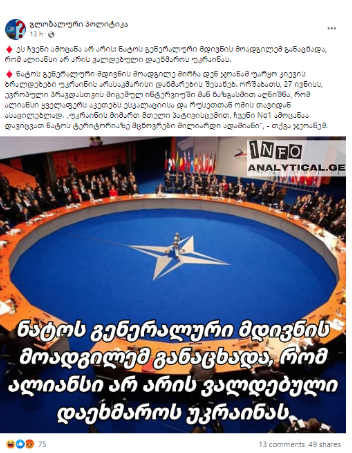 The information disseminated by Global Politics is partly false. In fact, Mircea Geoană indeed stated that the priority of the Alliance is to avoid escalation with Russia, adding that various forms of assistance to Ukraine remain the obligation of NATO and that the process will continue. Commenting on the criticism of the Ukrainian leaders, Geoană said that he would probably do the same in their place.

Romanian Deputy Secretary-General of NATO, Mircea Geoană, spoke to the Ukrainian edition of European Pravda before the NATO summit in Madrid on June 27th.

The post published by Global Politics manipulatively reinterprets the answers given by Mircea Geoană to various interview questions.

During the second question of the interview, the journalist asked the diplomat if he expected critical statements from the Ukrainian authorities during the summit, as they often made critical calls for NATO support. When asked, Mircea Geoană replied that he fully understood the position of Ukrainian leaders, adding that he would do the same in their place.

Geoană also noted that although NATO did not supply arms to Ukraine, it still provided other significant but non-lethal assistance to the country, while arms were provided by the member states independently. The diplomat called on friends in Kyiv to see this support as a joint aid from the democratic West.

Mircea Geoană, NATO Deputy Secretary-General: “We fully respect the way president Zelensky expresses his position. The same goes for statements by the Ukrainian government, Foreign minister Kuleba, Defense minister Reznikov, vice-PM Olha Stefanishyna, and all our friends in Ukraine. To be frank, if I were in that situation, I would probably do the same. But I’m trying to explain that we took a deliberate decision to provide Ukraine with significant but nonlethal support from NATO. In contrast, Allies and partners support Ukraine with lethal military equipment. I would encourage our friends in Kyiv to look at our assistance as a whole, as the joint assistance by the democratic West. […] Ukraine and the Ukrainian people should count on us that will continue to help. We will also help in Ukraine’s transition toward the NATO equipment. The Soviet era of equipment is over.”

In the following part of the interview, Mircea Geoană talks about the Ramstein Format. It is here when he says that NATO’s primary goal is to protect the 1 billion people living in NATO countries, which is why they are doing everything possible to prevent an undesirable war between Russia and NATO.

Mircea Geoană, NATO Deputy Secretary-General: “NATO is an organization that is the “risk owner.” With all due respect, our number one job is to protect 1 billion people living in NATO countries, where article 5 does operate. That’s why we try to avoid the risk of escalation, as the war between Russia and NATO would be something that is in the interest of no one. […] Ramstein process is an exceptionally functional and practical way to cooperate, and probably it’s even better to do it like that (under the US umbrella -EP) without having a big bureaucracy (under official NATO leadership), just because it’s faster, which is important in times of war. And I think that should be satisfactory for Ukraine. Indeed, sometimes I see the criticism against NATO, and I understand why. But I think this criticism is unjustified. What you receive from us is more important than who’s doing what.”

According to the post of “Global Politics,” Geoană said that NATO has no obligation to help Ukraine, although in reality, at the end of the interview, the diplomat stressed that Ukraine’s assistance is an obligation of the Alliance.

Mircea Geoană, NATO Deputy Secretary-General: “It’s our obligation to continue helping Ukraine militarily, financially, diplomatically, and in the humanitarian dimension. We are immensely admiring your courage. And we will be staying with you all the way long.”

The Facebook page “ Global Politics” was created on September 7th, 2021 and mostly shares content in support of the “Alliance of Patriots of Georgia” and the articles of anti-Western outlet Infoanalytical.ge. Disinformation disseminated by “Global Politics” and Infoanalytical.ge has been fact-checked by “Myth Detector” in the past as well. For more, see our articles: