What did Josep Borrell Say about Identity? 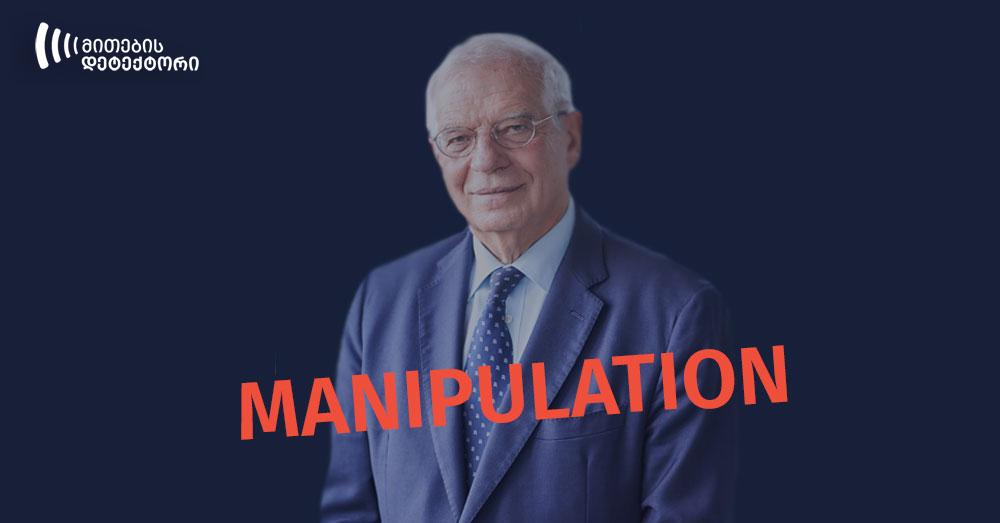 Tamar Kiknadze, a Georgian political analyst, said during Obieqtivi TV program “Gamis Studia” (Night Studio) on December 24 that EU High Representative for Foreign Affairs and Security Policy, Josep Borrell allegedly claimed that a human being should have no religious, ethnic or gender identity. Kiknadze called it the key postulate of liberalism, linking it to the reality of an ongoing pandemic. Earlier on December 21, Nino Ratishvili, host of Obieqtivi TV, slammed Borrell’s statement as “terrible,” noting that he openly hints that rejection of identity is the key principle, “the cornerstone” of the European Union. Moreover, on December 22, Georgia and World, an online media outlet, published an article headlined “Move ahead towards EU membership through rejecting Georgian nationality,” where it portrays Borrell’s words in the same context.

The claim as if EU High Representative Josep Borrell calls on the countries to reject their identities is manipulative. In fact, speaking at the international conference dedicated to 25 years of the Dayton-Paris Peace Agreement, Borrell stressed the importance of ending the war. He focused on the need to reject narrow-minded definitions of national interest as well as the use of ethnic or religious identities to separate instead of reuniting.  Anti-Western and Russian media outlets interpreted his remarks in quite a different context. It is worth noting that the Dayton-Paris Peace Agreement put an end to the three-year-long Bosnian War between different ethnic and religious groups.

What did Josep Borrell say?

To commemorate the 25th anniversary of the Dayton-Paris Peace Agreement, the Croatian Academy of Sciences and Arts and the Ministry of Foreign and European Affairs organized the International Conference “The Legacy of Peace – 25 Years of the Dayton-Paris Peace Agreement” in Zagreb (Croatia) on December 15, 2020. According to the information posted on the Croatian Foreign Ministry’s website, EU High Representative for Foreign Affairs and Security Policy, Josep Borrell also participated in the conference along with the Croatian Prime Minister, officials from NATO, France and Russia, as well as other invited guests. Full video recording of the conference is also available.

In his remarks, Josep Borrell focused on the importance of reconciliation as “a word central to a peaceful and prosperous Western Balkans.” He also spoke about “the darkest periods of Europe’s modern history” as well as two world wars, stressing that “we need to overcome the legacies of the past, to never let such atrocities happen again.” Borrell also noted that ethnic or religious identities should be used to reunite instead of separating and fight between identities should be ended. The EU High Representative stressed that reconciliation is not just a precondition for joining the European Union, but it is central to the nature of the EU that was built to overcome the challenges of the past and to look at the future. Borrell called on the Balkans political leaders to work together to build a better future for their country as well as to promote cooperation and reconciliation.

Josep Borrell, December 15: “Two world wars taught us that mutual respect and compromise take us further than blood and soil. We must reject narrow-minded definitions of national interest as well as the use of ethnic or religious identities to separate instead of reuniting. Identity can kill; everyone of us has an identity; maybe several identities at the same time; we have overcome the battle of identities, we have to continue fighting for human rights and fundamental freedoms as the cornerstones of the European Union.”

What is the Dayton-Paris Peace Agreement and why did Borrell focus on conflict between identities?

The 1995 Dayton-Paris Peace Agreement put an end to the three-year-long bloody civil war on the territory of the former Socialist Republic of Yugoslavia. The agreement was signed by the Presidents of Bosnia, Croatia, and Serbia, ending the war in Bosnia and outlining a General Framework Agreement for Peace in Bosnia and Herzegovina. It preserved Bosnia as a single state made up of two parts, the Bosniak-Croat Federation and the Bosnian Serb Republic.

After the dissolution of the former Socialist Republic of Yugoslavia, conflict erupted in one of its integral parts, Bosnia between Bosnian Muslims, Croatian Catholics and Orthodox Serbs. Nationalism built on different ethnicities and different religions played a huge role in fomenting the conflict.  At least 100,000 people were killed and more than 2,000,000 displaced during the war.

Vladimir Solovyov, an anchor of Russian state-owned TV channel Россия-1, focused on Borrell’s statement in one of his programs. Airing part of Borrell’s statement, Solovyov noted that the EU High Representative called on the countries to lose their identities, quoting the latter as saying that identity can kill. According to the article published by Sputnik Lietuva, Borrell’s words point at putting universal European identity above national and religious identity. In this view, the author draws parallels with the Soviet Union.