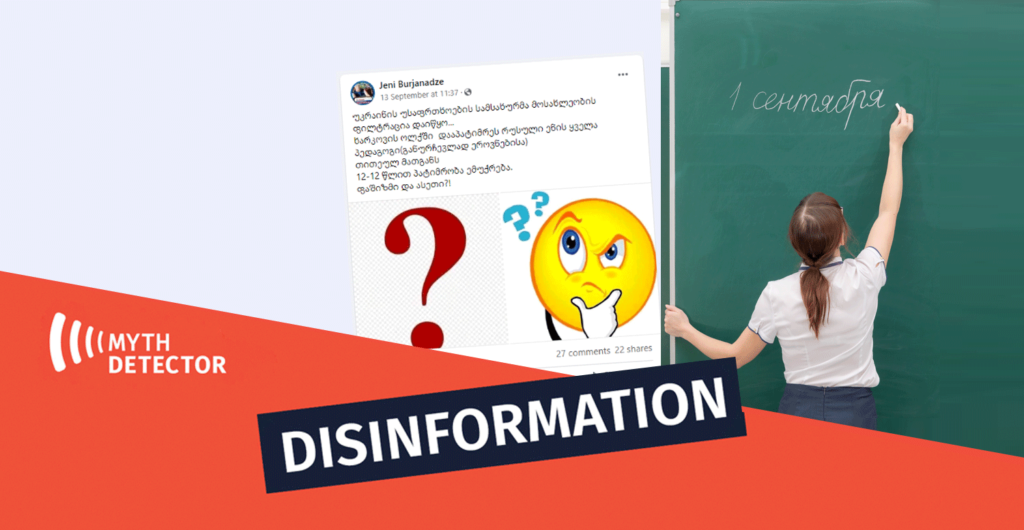 On September 13th, Georgian-speaking Facebook users disseminated the claim that Ukrainians arrested all Russian language teachers in the Kharkiv district, regardless of their nationality. The reports claim that those arrested face 12 years of imprisonment. 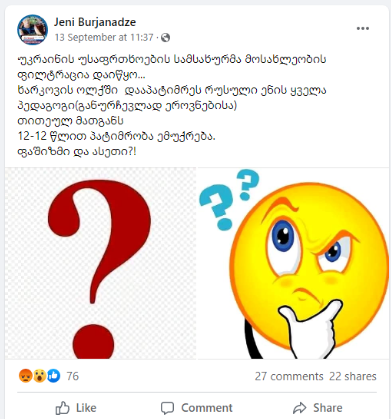 The claim that all Russian language teachers were arrested in Ukraine, regardless of nationality, is false. The Vice Prime Minister of Ukraine, Iryna Vereshchuk, has, in fact, confirmed the detention of teachers, noting that the Ukrainian side arrested those teachers who came to the temporarily occupied Ukrainian territories from Russia. Claims about the arrest of teachers were denied by the representative of the General Prosecutor’s Office of Ukraine. At the same time, the Russian side notes that there were no Russian teachers in the Kharkiv region.

On September 13th, based on the article of the Ukrainian publication Strana.ua published on September 12th, “Radio Liberty” reported that the Vice Prime Minister of Ukraine, Iryna Vereshchuk, confirmed the detention of only Russian citizen teachers in the territories liberated by Ukraine.

In a comment to Strana.ua, Vereshchuk explained that the arrested teachers were brought from Russia to the temporarily occupied territories. They taught in local schools according to the Russian program.

Iryna Vereshchuk, Vice Prime Minister of Ukraine: “They committed a crime against our state. We warned Russian citizens many times who agreed to come to the territory of Ukraine and carry out activities prohibited by law here. Of course, the court will determine the punishment for them, but there are still a certain number of Russian citizens on the territory of our state who have arrived to the temporarily occupied territories and will definitely be punished if they do not leave our territory without delay.”

Later on, the opposite information was reported by Настоящее время. In a comment to them, the Office of the Prosecutor General of Ukraine denied the fact of teachers’ detention. The outlet published the comments of Igor Belousov, head of the Department of Combating Crimes Committed During Armed Conflict:

Igor Belousov, Prosecutor’s Office of Ukraine: “According to the Office of the Prosecutor General, Ukrainian law enforcement officers did not detain Russian teachers in the de-occupied territories of the Kharkiv region.”

On the same day, while joining the Breakfast Show program, Mykhailo Podolyak, the adviser to the head of the office of the President of Ukraine, noted that it is too early to talk about the persons detained in the territories liberated by the Ukrainian army, and if such a fact is confirmed, Russian citizen teachers will not be considered prisoners of war.

The Russian side does not confirm the detention of the teachers. On September 12th, the publication Kommersant, citing a source close to the Russian Ministry of Education, noted that there were no Russian teachers in the region who could be held responsible in any way. And on September 13th, the Russian state-owned media RIA NOVOSTI, based on the representative of the Ministry of Education of Russia, Sergey Kravtsov, wrote that since September 1st, Russian teachers were not present in the Kharkiv region, and only local teachers participated in the educational process, which was restored in 90 schools.