Was Shevardnadze a member of the Order of Malta? – Conspiracies about Post-Soviet Leaders 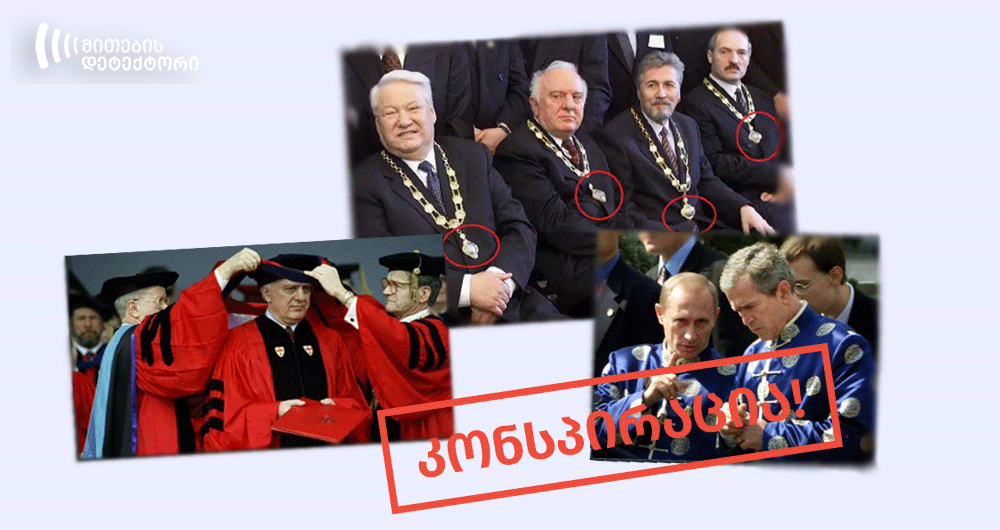 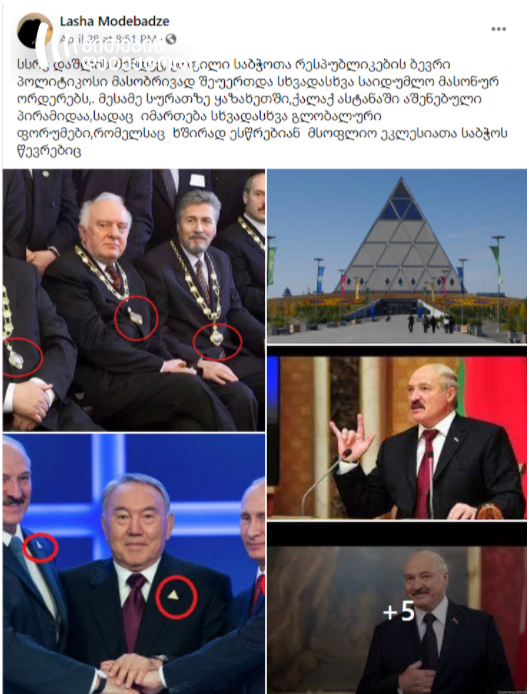 What do we know about the Pyramid?

The pyramid project belongs to the English architect Norman Robert Foster. The idea belongs to Kazakh President Nursultan Nazarbayev. Pyramid of Peace is dedicated to the renunciation of violence and religious tolerance. Pyramid houses temples from various religions, museums, cultural center, opera, library and so on. The building hosts the Congress of Leaders of World and Traditional Religions once in three years. Chamber has a circular form based on the design of United Nations Security Council meeting rooms in New York. 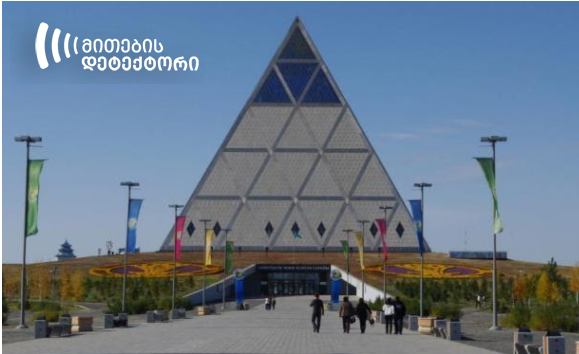 According to the conspiracy theory, a pyramid is considered a symbol of masonry. Information about it is particularly frequent on Russian-language web-pages. 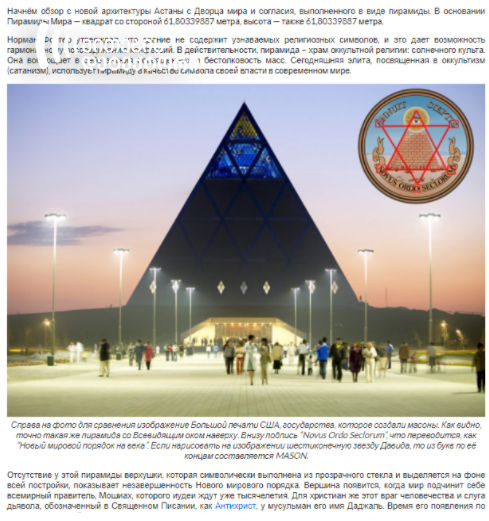 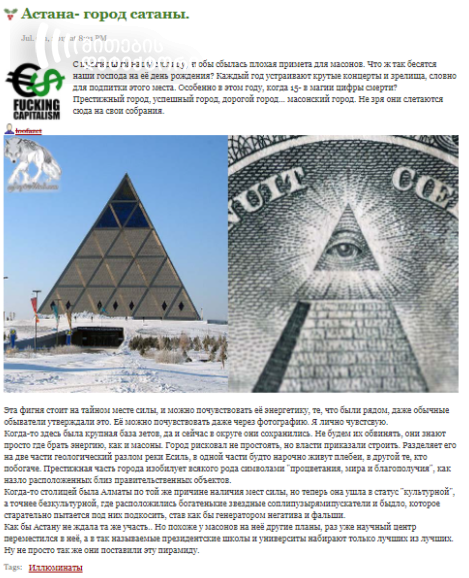 One of the photos depicts former Russian president Boris Yeltsin, former Georgian president Eduard Shevardnadze, former Romanian President Emil Constantinescu, and Belarusian president Lukashenko. The photo was taken in Jerusalem on January 6, 2020, and an object marked in red in Modebadze’s post is not actually a suspicious sign but the Star of the Chevalier of the Holy Sepulchre instead. 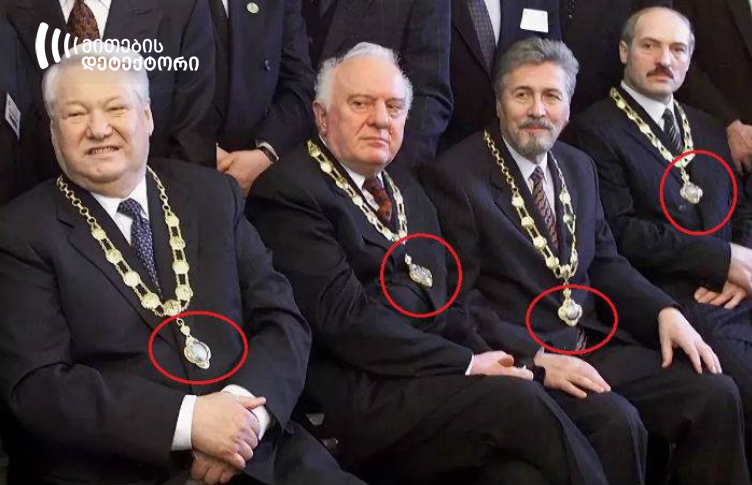 A photo that Lasha Modebadze links to masonry was taken when the Treaty on the Eurasian Economic Union was signed on May 29, 2014, in Nur-Sultan, Capital of Kazakhstan and depicts: Alexander Lukashenko, Nursultan Nazarbayev, and Vladimir Putin. Presidents from Belarus, Kazakhstan, and Russia signed a document enabling member states to ensure free movement of goods, services, capital, and labor in key branches of the economy and to implement coordinated policy. 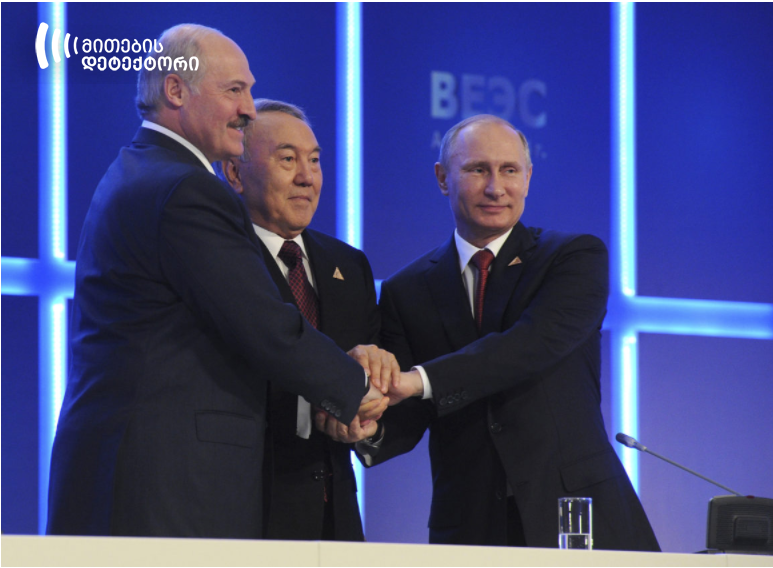 The photo illustrates USSR leader Mikhail Gorbachev being awarded Liberty Medal in the U.S in 2008. Former U.S President and chairman of the National Constitution Center George Bush presented the medal to Gorbachev. Philadelphia Liberty Medal is an award annually presented to individuals and organizations for their contribution to liberty and democracy. Gorbachev was awarded the medal for his role in ending the Cold War during the 20th award ceremony. 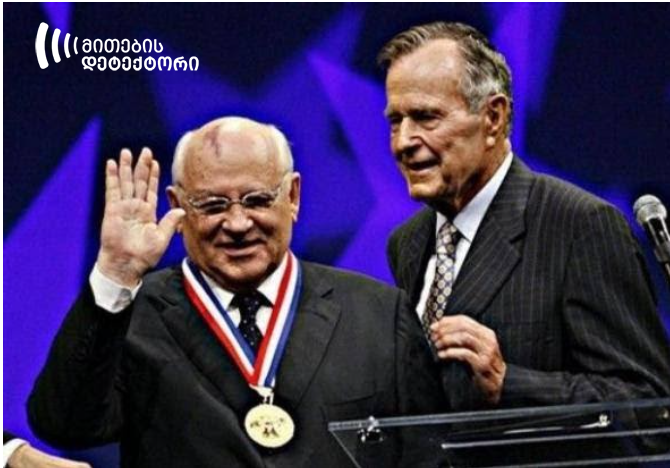 Photo of Eduard Shevardnadze in a robe

In addition to other photos, Lasha Modebadze presents Eduard Shevardnadze’s photo as evidence of masonry. Besides Modebadze, Davit Tordia also uses the aforesaid photo in the Youtube conspiracy video about masonry. Tordia states that Shevardnadze is captured in the robe of the Order of Malta. 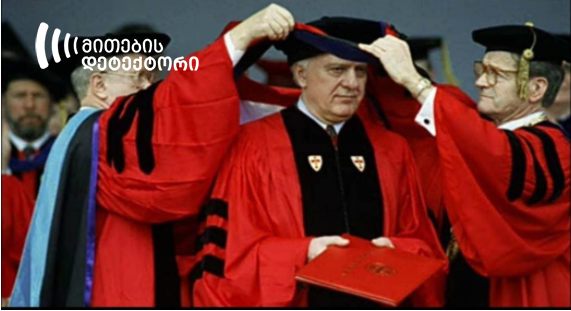 In reality, the photo was taken in the U.S state of Massachusetts in 1991, when Eduard Shevardnadze received an honorary degree from the Boston University. The robe belongs to the Boston University and not the Order of Malta. Lapel pin also has no connection to the Order of Malta or masonry. Identical robes can be found in the Google search engine.

As for the Order of Malta, it was indeed granted to Eduard Shevardnadze on September 30, 2000, for the destroying of the Berlin Wall and strengthening of peace in Europe. Lasha Modebadze’s post also has Mikheil Saakashvili’s photo depicting his meeting with the Fra’ Andrew Bertie, the Grand Master of the Order of Malta, in 2005.  Bertie expressed his appreciation to the President and stressed the current relations between Georgia and Order. It was precisely in recognition of strong bonds of friendship and cooperation that he granted the Order’s Collar to Saakashvili. 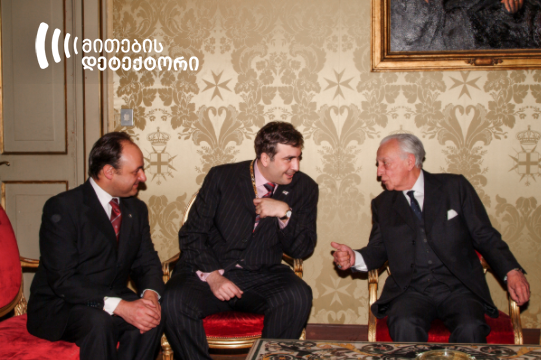 The connection to masonry is also a conspiracy when it comes to the Order of Malta. In reality, the Order of Malta originated in the 11th Century. The Sovereign Order of Malta is one of the oldest institutions of Western and Christian civilization. It has diplomatic relations with over 100 states and the European Union, and also has permanent observer status at the U.N. Order of Malta operates charity, and is particularly involved in providing aid to people in need of medical help due to armed conflict and natural disaster.

George Bush and Vladimir Putin in the identical attire 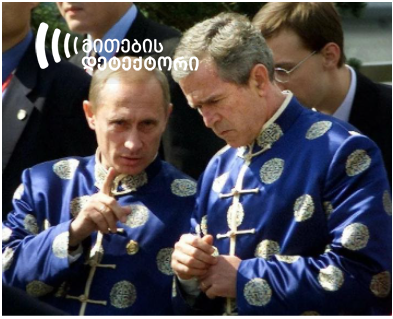 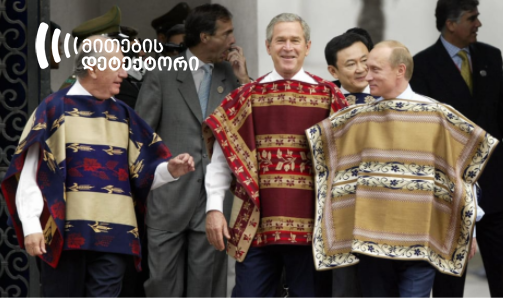 For years, conspiracies about masonry have circulated about masons controlling political processes and leading the world towards totalitarian governance that will be based on the principles and traditions of masonry or will be governed directly by the masons. Initially, the nature of masonry was associated with Satanism, then conspiracies reached the U.S alleging that Masonic symbolism was presented in the U.S: one the 1 U.S dollar bill, the map of Washington, and so on.

According to the conspiracy, the pyramid on the dollar bill makes a pentagram, whose edges point to the letters. When you combine those letters, the word “M A S O N” is spelled – this is the “evidence”. 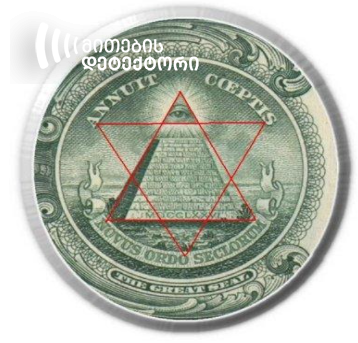 Another widespread opinion alleges that freemasons are the worshippers of Satan. They deny accusations from conspiracy theorists and claim that freemasonry preaches rationalism.

Freemasonry officially originated in England in the 18th century and its key principles are: brotherhood, love, equality, and relief.

Freemasonry’s symbol “The Square and Compasses” depicts a builder’s square joined by a compass. It’s a symbol of justice, balance, and stability. According to the experts from the Massachusetts Institute of Technology, the letter “G” in the center represents a geometry, whereas others believe this sign represents god, “Grand Architect of the Universe”. 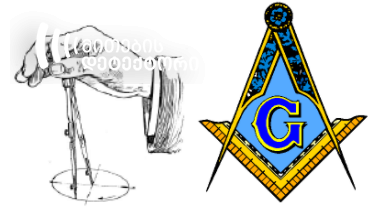