Ukrainian Land Forces or a British Movie on Equality? Who Fabricated the Video? 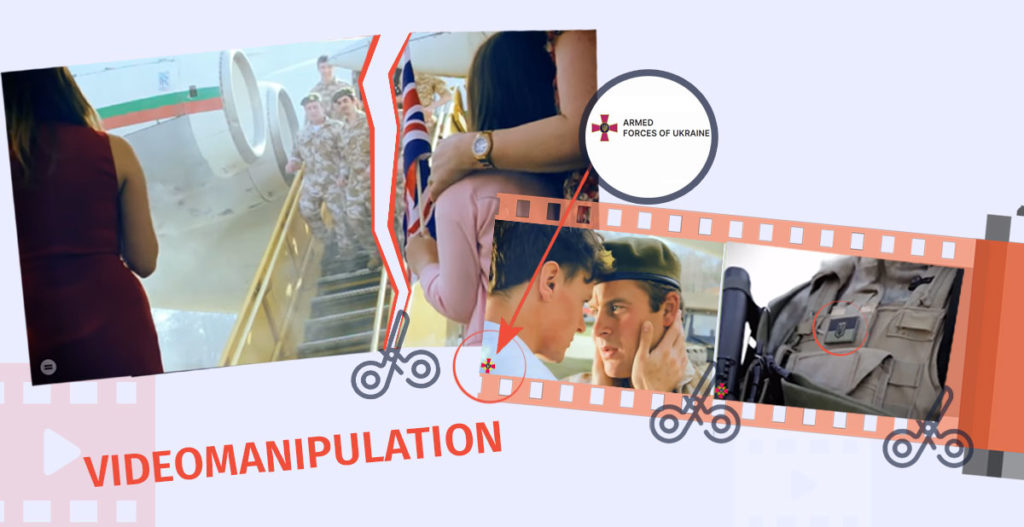 On January 27th, Facebook user Mancho Abramidze shared a video in a Facebook group consisting of the supporters of the newly-created “Conservative Movement.” The video depicts a young gay soldier returning home and meeting his boyfriend. After they hug, the soldier asks his boyfriend to marry him. The video allegedly depicts the Ukrainian army, while the author of the post adds the following comment: “The Ukrainians are going to win the war by having these people in the army.” The author expresses concern that the old Christian country [Ukraine] has thus “fallen and became perverted” and that “the same is desired here [in Georgia] as well.” In the lower-left corner of the video, we see the logo of the Ukrainian Land Forces. The same logo, a phone number and message of the Military Registration Bureau also appear in the last scene of the video, which gives the impression that the video was prepared as an advertisement for recruiting the Ukrainian army. 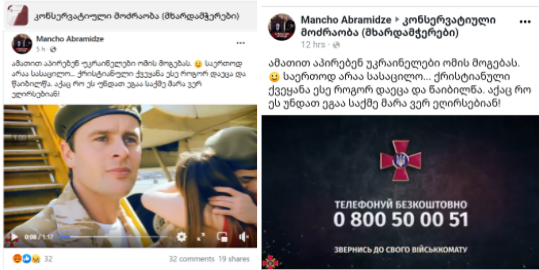 The video has been processed using software and is being disseminated with a false description. In fact, the video was not shot in Ukraine in 2022 but in 2012 in the UK by the “Coalition for Equal Marriage.” The logo of the Ukrainian Land Forces and footage of Ukrainian soldiers are manually attached to the video.

The short film was shot in 2012 in the UK by the “Coalition for Equal Marriage.” The organization advocates for equal marriage for the LGBTQ + community. 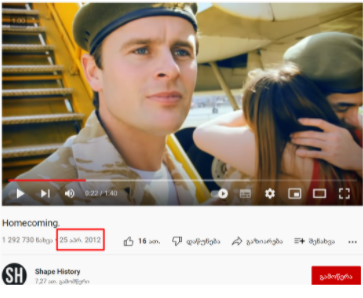 Notably, the video spread in Georgian social networks is altered and differs in length from the original version. The 2012 British video lasts 1:40 minutes, while the edited version lasts 1:17 minutes.

In the original version of the video, the British flag is often seen in the shot, while in the processed one, all these shots are cut out. 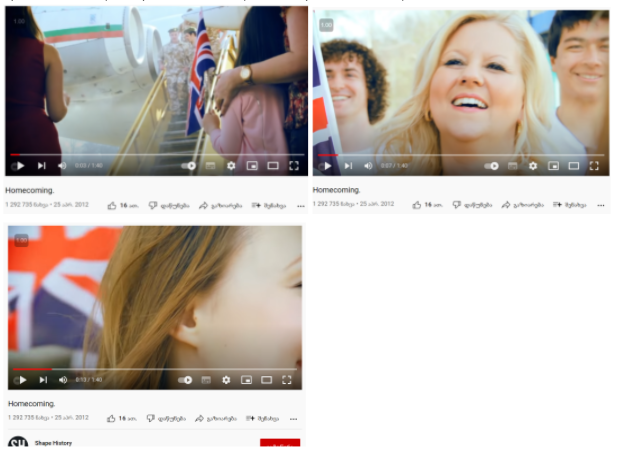 In order to make the viewer believe that the video was shot in Ukraine, a shot of a Ukrainian army uniform has been added to the video. The edited version also includes footage of the battlefield that was not used in the original version. 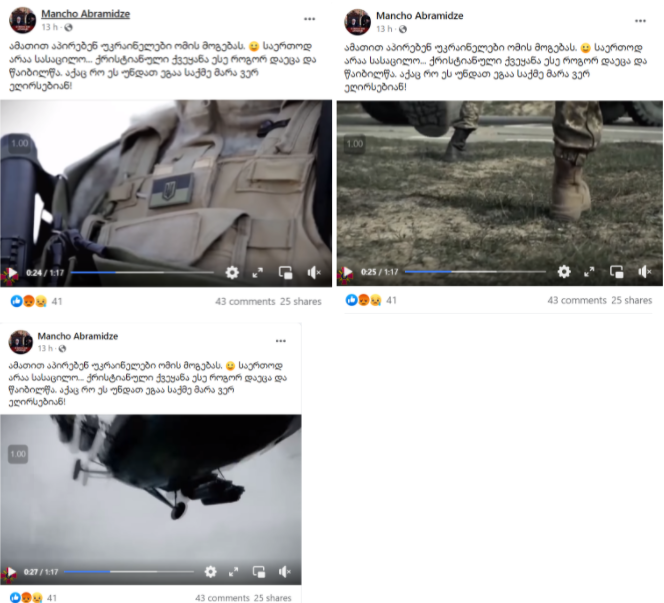 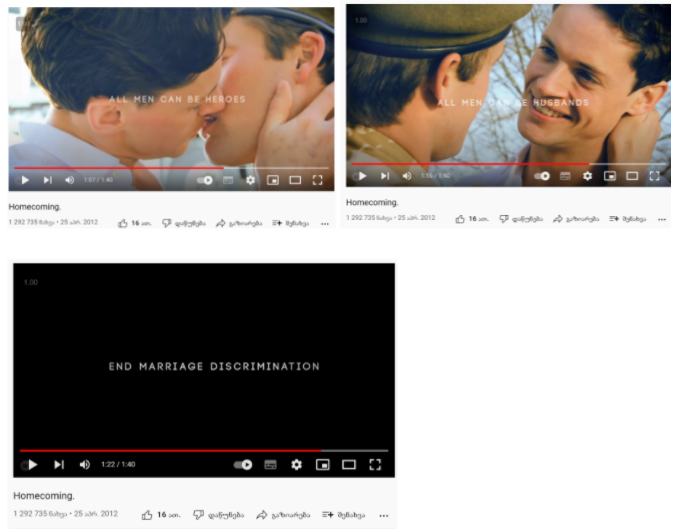 In the video spread in Georgia, the lower-left corner shows the logo of the Ukrainian Land Forces, which can be seen in all the shots. 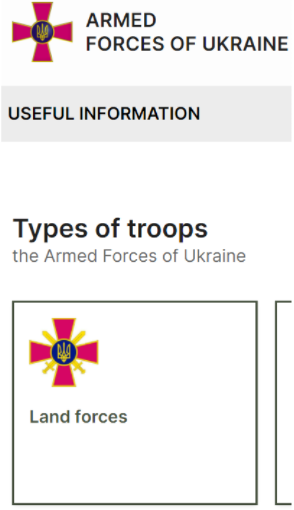 The same logo appears in the last scene of the video as well, where the caption urges viewers to call the number of the military conscription. 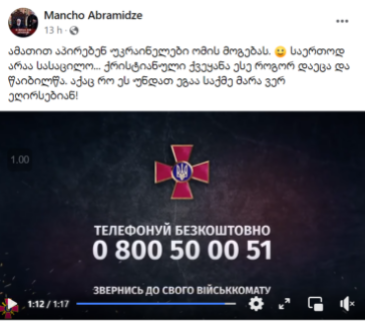 In fact, the lower-left corner of the original video shows the logo of the “Coalition for Equal Marriage,” which is manually covered by the logo of the Ukrainian Land Forces. In addition, in the last shot of the authentic video, the viewers are asked to raise their voices and share the message.

Not to mention, the official Facebook page of the Ukrainian Land Forces indicates a different number: +380 800 500 410 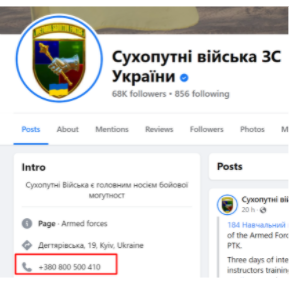 About the origin of the altered video

The fabricated version of the video has been circulating on the internet since 2017. The video was posted on the YouTube channel Українське Общество Педерастів (“Unity of Ukrainian Pedophiles”) on December 20th, 2017. 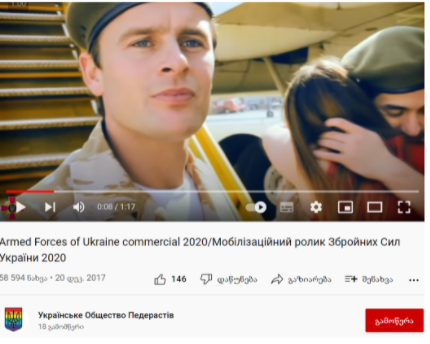 At various times the video was used to discredit the Ukrainian army. Notably, no other video can be found on the YouTube channel Українське Общество Педерастів, which raises the suspicion that the channel was created for the sole purpose to distribute this video. 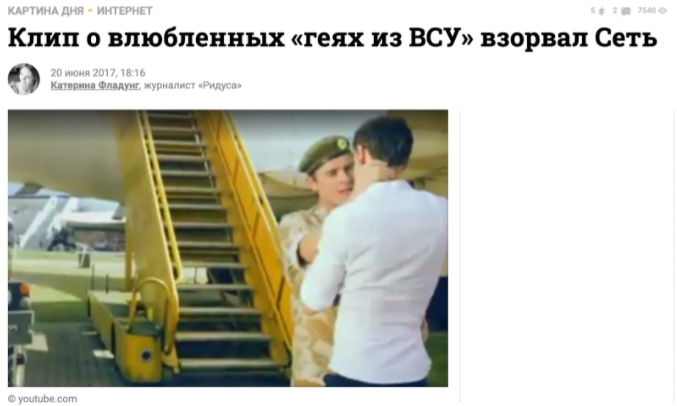 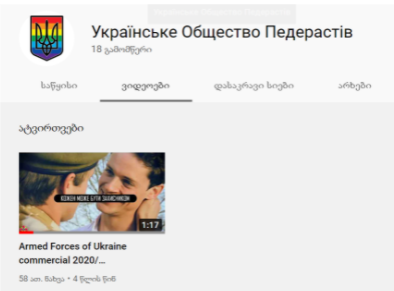 The Kremlin propaganda machine has used the topic of sexual identity to discredit the Ukrainian army in the past as well. For instance, Russian government outlet “RIA Novosti” disseminated false information about the deployment of a “gay battalion” by Ukraine to Donbas in 2021, with the headline: “На передовую: Украина планирует отправить в Донбасс гей-батальон ВСУ” [In the future: Ukraine plans to send a gay battalion to Donbas.] 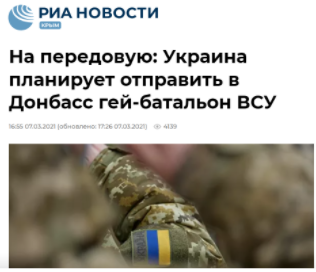