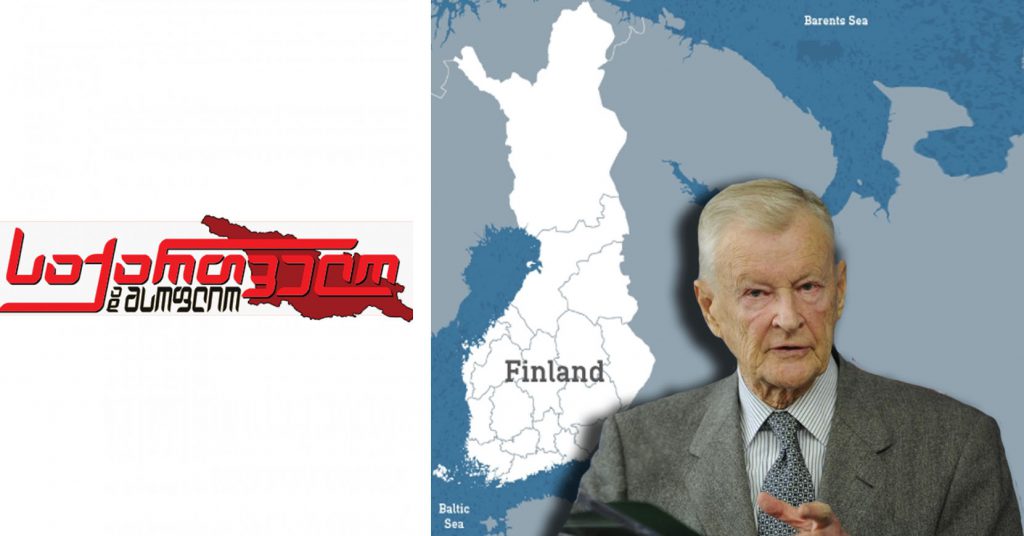 On November 19, an online edition Georgia and the World published an article titled “Let Us Walk the Great Ilia’s Path”. The article mentions that the West sows anti-Russian sentiments in Georgia and Ukraine and that this is a project aiming to destroy Russia. The author cites a quote – “the weakening of Russia should begin by splitting it from Ukraine”, which he attributes to an American diplomat Zbigniew Brzezinski.

Moreover, Georgia and the World, while assessing Russo-Georgian relations, brings Finland as an example. Finland is mentioned as a “rational” neighbor of Russia, who, according to the author, through cooperation with the Soviet Union first and with Russia later, achieved economic prosperity and welfare.

Georgia and the World: “One can see even with a naked eye the implementation of anti-Russian project by the United States and the EU countries. We remind you the recipe by a famous American (originally from Poland) politician and scholar, Zbigniew Brzezinski – ‘the weakening of Russia should begin with splitting it from Ukraine’!”

Georgia and the World: “We are so not like Finns, who, despite having had a hard war with the Soviet Union, quickly rose to the occasion, used their force and energy, assessed the conditions as well as their capacity and decided to cooperate with the Soviet Union, who captured important parts of Finns’ territory. The Soviet Union did not wait long – it supplied the Finnish industry with energy resources, timber, and ore and in no time, a country of only 5 million became a Garden of Eden.”

Reports disseminated by Georgia and the World about Brzezinski’s quote and Finland are not true. 1. Faking Zbigniew Brzezinski’s quotes and portraying him as harshly anti-Russian has been Kremlin’s narrative. 2. Showcasing partnership with Russia as a determinant towards Finland’s economic development is manipulative and aims at exaggerating the significance of Russia in the development of Finnish economy. 3. Comparing Georgian and Finnish political situations is irrelevant, as the the theme of returning the captured territories does not feature in Russo-Finnish relations. Moreover, Finland is a member state of the European Union and the Nordic Council, as well as a stable partner of NATO.

Zbigniew Brzezinski was not fighting an ideological war against Russia and was not plotting to destroy the latter either. In fact, in his book “The Grand Chessboard”, Brzezinski discusses possible development paths for Russia after the fall of the Soviet Union, as well as its relations with Ukraine. He notes that the Western orientation of Ukraine – ethnically the closest country to Russia among the Soviet republics – harmed the imperial interests of Russia the most. Brzezinski believes that the Russian project of a Eurasian Empire will be unsuccessful without Ukraine, as in this case Russia will become a conflict-ridden Asian-type empire, not a European one.

At the same time, Brzezinski allows the possibility of Russia transforming into a Western-type country and in this case, he assigns European Ukraine the central role in the “Westernization” of Russia.

In conclusion, Brzezinski, in his book “The Grand Chessboard”, does not write anything about “the recipe of weakening Russia”. He assesses the significance of Ukraine in Russia’s geopolitical and geostrategic interests, optimistically perceives Russia’s future development, and simultaneously does not exclude the possibility of Russia closely cooperating with NATO and the EU.

In 1980s, the Finnish economy grew due to deepening of trade relations with Western countries, joining international trade treaties, and an increase in industry and manufacturing. The Soviet Union was one of the trade partners of Finland and its dissolution negatively affected the Finnish economy, however, it managed to overcome the crisis in several years.

In fact, the development of the Finnish economy is due to correctly conducted domestic and foreign policy. Russia has not contributed towards its competitiveness, stability, and innovativeness – with Finland being the leading country in the world when it comes to the latter. Although Russia is one of the largest trade partners in terms of import for Finland, but it does not have a dominant influence over the Finnish economy. 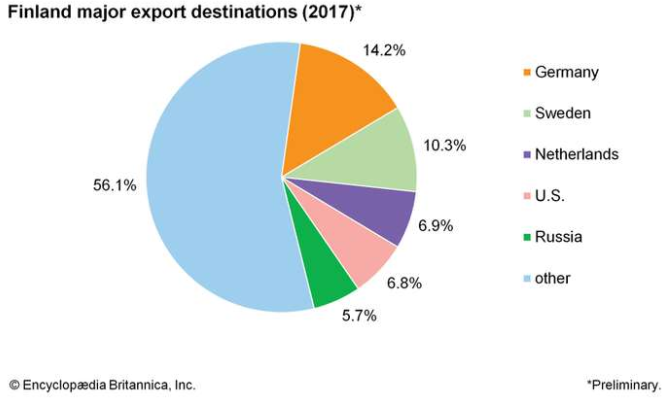 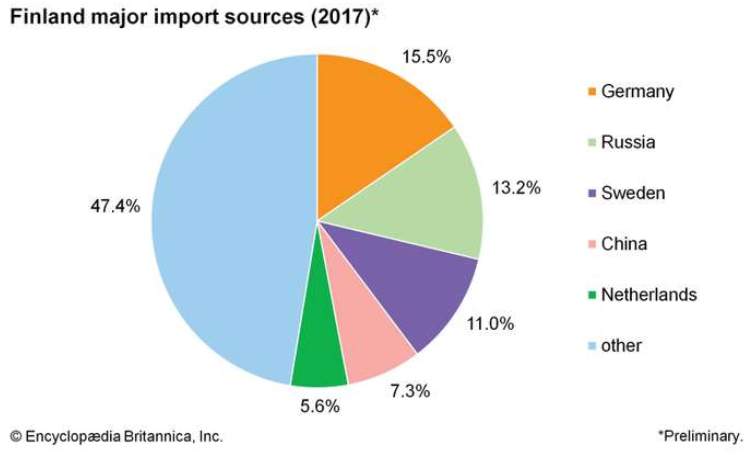 Natural gas and oil constitute the predominant part of the products imported from Russia – 61%. Finland also imports fuel from the EU and Norway, however, Russia is the main partner in this regard. Russia imports equipment, industrial products, and chemicals from Finland. Trade relations with the Soviet Union were also dominated by the aforementioned products.

Electricity and technology production, timber and chemical industry, as well as development and application of artificial intellect play a leading role in the Finnish economy. One of the determinants of the stable economic growth of Finland is the historical development of industry and the knowledge economy: Finland has the best indicator in the world when it comes to the level of schools and universities, science, and the qualification of the workforce.

Following the 1939-1940 Winter War, Finland was forced to cease Karelia to the Soviet Union and conduct a mass evacuation of Finnish population form there. Finland has never officially requested the Karelian Isthmus to be returned, with the reason being the lack of Finns in the given region. Instead, Finland made efforts to establish stable relations with the Soviet Union, at the same time trying to strengthen ties with European countries. In 1955, Finland became a member of Nordic Council – an organization of Nordic European countries. Although it maintained stable relations with Russia after the dissolution of the Soviet Union, it also became a member of the EU and became an active partner of NATO and the United States. Despite not being a member country of NATO, Finland is involved in nearly every important mission. Finland realizes the unpredictability of the constant threat coming from Russia and steadily develops its defense policy as well.

You can read about this topic in detail in the Myth Detector’s article: “Inashvili Against the Term ‘Occupation’.”