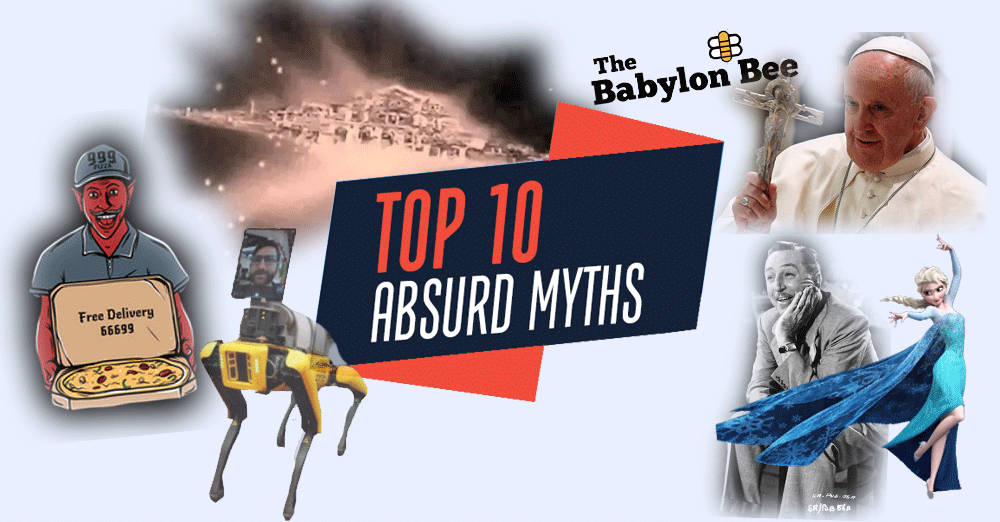 In 2021, “Myth Detector” fact-checked a number of absurd myths. Here are the 10 most unbelievable disinformation we have revealed in 2021.

Based on Daily News Reported, website npg.ge claimed that after Walt Disney’s death, his body was frozen in the hope that when a way to cure his illness would be discovered, he would be resurrected. According to the article, Disney was to be revived live in December 2021, the 55th anniversary of his death.

Facts: The website used as the source of the article is satirical. Information about Disney’s future revival plan is a conspiracy theory and has been around for years.

For more: where does the myth about Walt Disney’s revival come from?

A Facebook userpublished a video voiced in Russian, claiming that the CERN research center plans to open the gates of hell parallel to the establishment of the new world order. In the video, the topic of discussion is the European Council for Nuclear Research’s (CERN) collider, which CERN will use to reach the depth of the earth and open the new dimension. Video also mentions that Shiva, Hindu God of destruction, represents a token of CERN, whereas the logo of the research council depicts three six.

Facts: CERN seeks to study the standard model theory and scientific basis of the creation of the universe. Shiva statue in the courtyard of the CERN is a gift from the Indian government, not a CERN symbol, whereas the logo represents particle accelerators instead of three-six.

For more: Does CERN Seeks to Open the Gates of Hell and What Role Does Hindu God Shiva Play in Science?

The host of “Khariskhis Arkhi” published a post, claiming that the Pope stated that people who are not vaccinated could not enter heaven. According to Giorgobiani, this kind of “blessing” from the Pope should show people, that in reality, every religion does not believe in one god.

Facts: The primary source of this information is the satire publication The Babylon Bee, which means that the story is made up. Pope Francis, indeed, supports Covid-19 vaccines but he has not made any similar statements about vaccination.

For more: Does the Pope require vaccination to enter heaven?

A clickbait webpage sport365.ge published an article with the following headline: NASA Astronomers Discovered God’s Heaven – See Where Humans Go after Death”. According to the article, in 1994 Hubble Telescope identified a gigantic artificial object in space, and specialists discovered it to be a colossal city in the center of the galaxy after they received and thoroughly studied other photos of the object. This precise city was called “God’s Heaven”. The article states that initially the U.S. government tried to hide the information and didn’t’ allow NASA scientists to publish the images, however, photos of “heaven” was published in 1995 in a German scientific journal making it impossible to hide the information.

Facts: The claim about NASA’s alleged discovery of “God’s Heaven” is disinformation that has been circulating online for years and originated from a 1994 article by an American Satirical publication. The first one out of three disseminated images was published precisely by the aforesaid satirical publication and it’s completely fabricated. Whereas the other two feature photoshopped versions of images taken by the Hubble Space Telescope.

For more:  Report on “Heaven Above” turned out to be a satire

Giorgi Kardava, the host of Alt-Info’s program “Alt-Analytics,” stated that the more liberal the state becomes, the higher its crime rate. Kardava asserted that most criminals reside in Western countries and in non-democracies such as Saudi Arabia, Iran and Belarus, the crime rate is relatively low, while in North Korea, there is no crime at all.

Facts: Out of the top ten countries with the highest crime rates, none is a European country. The list of the top ten countries in the world in 2021 with the highest crime rate per 100 000 population is as follows: Venezuela, Papua New Guinea, South Africa, Afghanistan, Honduras, Trinidad and Tobago, Guyana, El Salvador, Brazil, Jamaica. As of 2021, the United States ranks 56th globally in terms of crime. Belarus and Iran, mentioned by Kardava, take the 24th and 48th positions. Notably, non-democratic countries characterized with less transparency, for instance, Russia, often seek to reduce crime statistics to improve their international image artificially.

For more:Alt-Info Claims that North Korea, Iran and Belarus Have Lower Crime Rates than the West

Social network users have disseminated a number of conspiratorial and absurd allegations about coronavirus vaccines and their composition in 2021. Among them was the assertion that because of the radioactive metals in the vaccine, metal detectors installed at airports could identify the vaccinated people. Allegedly, vaccinated persons were also identifiable by Bluetooth.

Facts: The claim about the vaccines being able to be detected by a metal detector at the airport is fabricated. Coronavirus vaccines do not contain radioactive metals. The Claim that mRNA protein, which is injected into the human body following the vaccination, enables the person’s connection to Bluetooth device ensuring their detectability via smartphone is false. In reality, the codes depicted in the videos are MAC addresses of devices, which, instead of vaccination, determine the device’s ability to connect with other devices.

A Facebook user posted a video depicting several robots moving in the street. According to the video description, Antichrist “ruled by antennas” is walking in the streets, claiming that “when their number exceeds the number of people, horror will begin.”

Facts: Instead of antichrist robots, the video depicts “Spot” – an invention of the American technology company, which is actively used in various heavy industries to reduce the threat to humans.

For more: Antichrist or Boston Dynamics Robots – What does the Video Display?

The new advertisement of the mineral water “Borjomi” was followed by a controversial response on social media. Several users have argued that the three leaves portrayed in the video signify the third spiral of the DNA, while their combination gives us the number 666. Accordingly, the advertisement hints at the hidden attempts to change our DNA, which is now carried out through the “genetic injections.”

Facts: In reality, the ad of Borjomi accentuates the origin of the juvenile water, while the new symbol is inspired by the cross of Bolnisi.

A video was disseminated on social media showing the arrest of a woman. According to one of the users, the Australian woman was kneeled by the “Lucifer’s servant Gestapo” policemen before the number 666. The video shows several numbers, including three sixes, written on the window at the place of arrest.

Facts: In fact, the video, which depicts a woman being arrested, was taken near a pizzeria. The footage shows not the “sign of the beast,” but the last 3 digits of the pizzeria phone number.

For more: “Mark of the Beast” or Pizzeria phone number – what does the video depict?

Several Facebook users have published a video, dubbed in Georgian, in which Pierre Gilbert talks about vaccines being used to turn people into zombies through intentionally poisoning their blood and planting liquid crystals in the brain during the course of the vaccination against infections. The authors noted that this technology has already been used in Rwanda.

Facts: The claim that liquid crystals are planted in the human brain through vaccination is false. In fact, liquid crystal is one of the states of matter and it is impossible to plant it in the brain. Considering that Pierre Gilbert’s video was recorded in 1996, he probably means the 1994 ethnic genocide in Rwanda, not a vaccination campaign.

For more: Can Liquid Crystals Be Used to Turn Humans into Zombies?