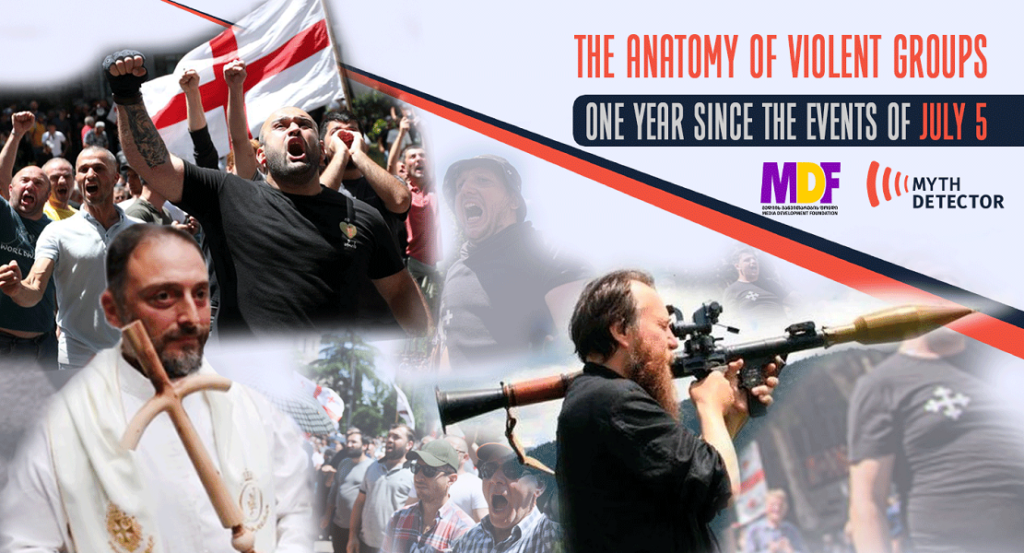 One year has passed since the violent actions of July 5, 2021, led against the “March of Dignity” planned within the Tbilisi Pride Week. In order to disperse the rally, violent groups held a counter-demonstration on Rustaveli Avenue, raiding the offices of civil activists organization “Shame Movement” and “Tbilisi Pride”, as well as the opposition tents placed in front of the parliament. On July 6, the participants of the protest took down the flag of the European Union erected next to the flag of Georgia in front of the parliament and burned it. Violent groups physically assaulted 53 journalists and deliberately damaged their equipment. According to the information of the Ministry of Internal Affairs, 31 people were initially arrested on the facts of threats of violence, illegal obstruction, persecution with violence and threats of violence, as well as group violence. However, according to the Media Advocacy Coalition, the law enforcement officers did not take any measures against the organizers of the violence.

A significant part of the participants of the violent counter-demonstration came from different regions of Georgia, namely: Svaneti, Imereti, Kakheti, Rustavi, Samegrelo, and Adjara, and predominantly consisted of the supporters of Levan Vasadze’s party “Ertoba, Raoba, Imedi” [Unity, Essence, Hope] and the “Georgian March”. Through the analysis of the open source data, including images, distributed on social media, “Myth Detector” managed to identify the persons participating in the violent action and determine their connections (see Appendix 1). Groups that work in different directions or in several directions at the same time have been identified. These are the following:

The counter-demonstration was organized and ideologically supported, including the cultivation of violence as a means to achieve the goal, by the founders and anchors of TV Alt-Info, which later transformed into a political party – the Conservative Movement. In turn, the mentioned group is linked to the far-right Russian philosopher and founder of the Eurasianist movement, Aleksandr Dugin.

The following report aimed to study those groups that appeared most vividly in the public arena as a result of violent protests and organized violence against journalists during the Tbilisi Pride Week on July 5, 2021. The first part of the report will be devoted to the profiles of the participants of the rally, and the second part will cover Alt-Info, which has transformed into a political party and entered the political arena with the agenda of changing the country’s pro-Western foreign policy course and resolving relations with Russia, including military cooperation.