Solidarity for Peace or Russia? – Alternative Research Leading to the Alliance of Patriots of Georgia 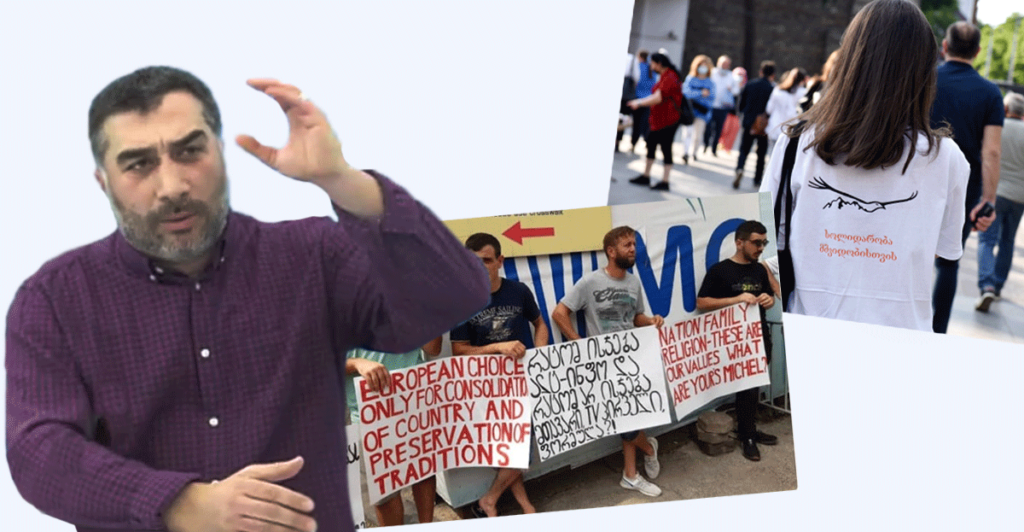 While the survey results of the authoritative research organizations demonstrate the support of the Georgian population for the North-Atlantic Treaty Organization (NATO), political party “The Alliance of Patriots of Georgia” has been actively spreading the narrative that NATO no longer remains the priority for the Georgian people. According to the 2021 Public Opinion Research of the NDI, 74% of the population supports the integration to NATO, while 76% supports the European Union. The survey carried out by the International Republican Institute (IRI) showcases the same tendency, showing that 78% of the population fully or partially supports Georgian membership in NATO. Nonetheless, the “Alliance of Patriots of Georgia” still tries to question the apparent support towards NATO using two separate arguments:

Apart from the research carried out by the “Alliance of Patriots,” an alternative organization has emerged in 2021, which is linked with the AoP and pursued public opinion research using cameras and manipulatively designed questionnaires.

N(N)LE “Solidarity for Peace” was registered on February 2nd, 2021. According to the Facebook page, the organization labels itself as a social movement to preserve Georgian traditions, culture and identity and showcase them within Georgia and beyond. The “about us” section of the page claims that one of the organisation’s directions is to unite the youth around the same idea and ensure healthy partnership and coordination, followed by lasting peace.

The members of the founding council of “Solidarity for Peace” are Zurab Chokheli and Merab Chikovani, while the head of the organization is Merab Chikashvili – a member of the “Alliance of Patriots” and the host of TV Obieqtivi. During the Parliamentary Elections of 2020, Chikashvili represented the AoP and ran as a majoritarian candidate of Gldani.  In 2011, he was also the head of the “Ratom?” movement. Merab Chikovani is the founder and co-owner of the law company “Legal Point Georgia.” In June 2014, Chikovani donated GEL 800 to the “Georgian Dream” Party. Zurab Chokheli is the owner of “Shino” Ltd. In 2004, he was also holding the position of the Dusheti Municipality Head of the MIA. 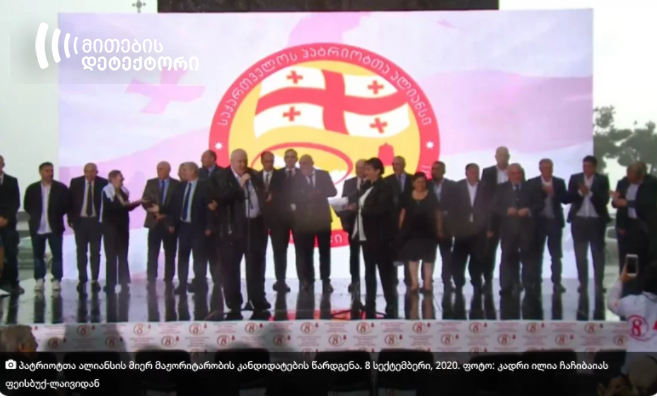 The Facebook page “Solidarity for Peace” was created on May 24th, 2021. Three days after the creation, the page announced that the organization was conducting sociological research regarding Russia Georgia relations. The page has also stressed that all the previous research did not display the actual attitudes of the public and only aimed to portray Russia as an enemy. The page has even mentioned the topics accentuated during the survey: 1. Restoration of comprehensive relations between the two countries 2. Visa-free travel 3. Restoration of direct flights between Russia and Georgia. 4. Full restoration of tourism and other economic relations. 5. Establishment of student programs. 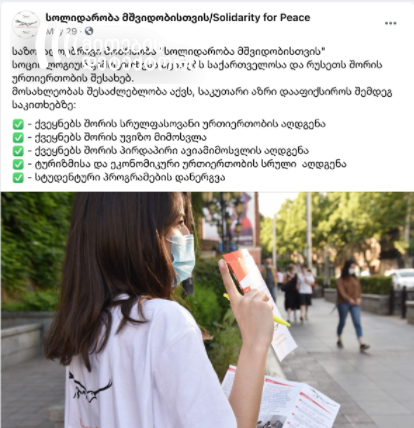 Before announcing the results, the page has published two posts (1,2) and three videos (1,2,3)  displaying the research process. The organization recorded the process of asking questions, and the questions regarding the aforementioned topics were only positively answered by the respondents. Not to mention, in two of the videos, primarily the same people are the ones giving answers.

The actual results of the survey were published on the organisation’s Facebook page on July 23rd, 2021, in the form of a video. According to the page, a total of 8990 people have participated in the survey, while the results were the following: 1. Do you consider it necessary to restore the relationship between Georgian and Russian people? (Yes 73,0%, No 21,1%, Don’t Know 5,3%) 2. Do you agree that there should be a visa-free regime between Russia and Georgia? (Yes 75,2%, No 20,9%, Don’t Know 3,9%) 3. Do you agree that the direct flights between Georgia and Russia should be restored? (Yes 80,4%, No 16,2%, Don’t know 3,4%) 4. Do you consider it necessary to hold a direct dialogue between Georgian and Russian leaders? (Yes 78,9%, No 17.2%, Don’t Know 3,9%) 5. Do you agree that student programs should exist between Georgia and Russia? (Yes 75,1%, No 19.5%, Don’t Know 5.3%). According to the page, the questions have been developed after consulting with professional sociologists, who have managed to develop the formulations that would represent the findings most robustly and leave no room for interpretation. It is also important to mention that the video is not accompanied by any report or an official document, allowing the reader to dive deeper into the survey results. 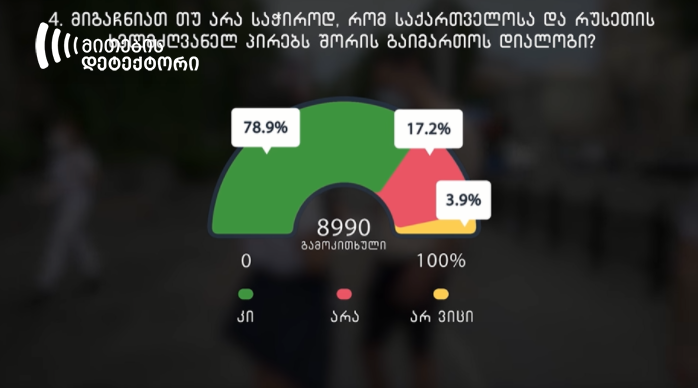 According to the information available in the open sources, “Solidarity for Peace” uses solely dichotomous questions, allowing the respondent to choose from two/three possible answers. It is also essential to mention that the questions are formulated in a positive way (Do you agree; DO you consider it necessary etc.), which significantly reduces the robustness of the results. Several scientific research clarifies that using only dichotomous questions in public opinion surveys can be somewhat misleading since people have a natural tendency to agree to things, not to mention, people tend to struggle to answer no to positively formulated questions rather than agreeing to negatively formulated ones.

On July 19th, during the visit of Charles Michel, the members of “Solidarity for Peace” held a protest in Batumi. The articles published on Facebook clarify that “Solidarity for Peace” activities were reported by the Georgian Public Broadcaster, pro-governmental outlet For.ge and the hybrid edition Spnews.io.  The organization demanded the protection of majority rights over the minorities and the persecution of “Formula” and “TV Pirveli” instead of the Levan Vasadze-linked “Alt-Info.” The protest organisers used the following message banners: “Don’t support the minority, which uses violence against the traditional majority.” “Why is Alt-Info being prosecuted, and not “Formula,” “Alt-Info,” “Mtavari,” and “TV Pirveli?”

Merab Chikashvili, Solidarity for Peace: “I am interested, does Charles Michel share the idea that the fundamental value should be the national uniqueness, centuries-long traditions and family consisting of a man and a woman (mother and father) having at least one child or more? I am interested; why is the extreme-conservative part the only one getting punished, and not the extreme-liberal wing that spreads perversion, vandalism and violence? Why can you, let’s say, punish “Utsnobi,” who simply wrote on a stone that “God is love” and say nothing about the fact that the Georgian Orthodox Church or the Parliament building is regularly defiled by paint and other substances by the opposition? Why does Michel only condemn violence against journalists and not the far worse violence against the mass-consciousness by the same media for more than 20 years now?!” 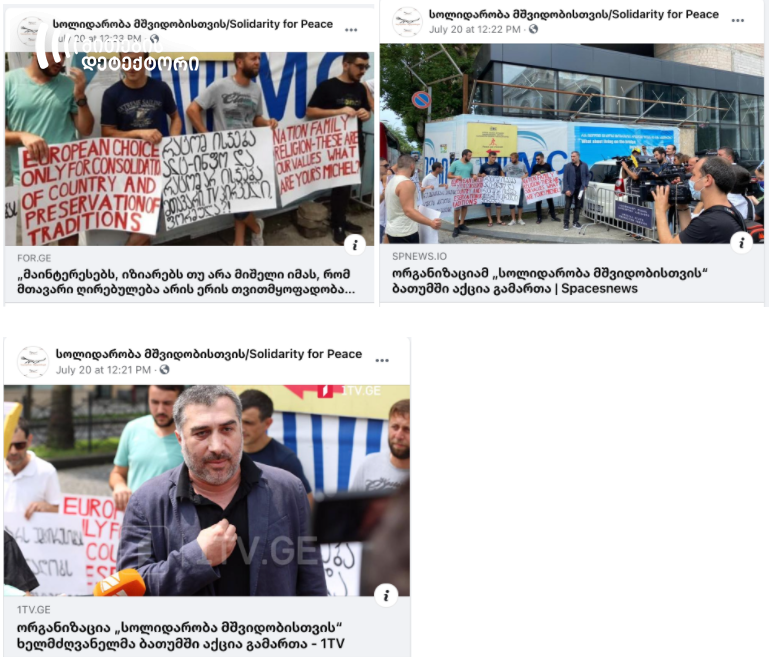 Merab Chikashvili, the organisation’s head, is a regular guest on the Levan Vasadze-linked “Alt-info’s” programs. Alt-Info was among the organizers of the violent demonstration against “Tbilisi Pride” on July 5th, 2021.  On June 23rd, during one of “Alt-Info” Programs, Chikashvili labelled the messages criticizing Georgian artists travelling to Russia as malicious and adventurist.  Chikashvili voiced the same sentiment at Rustavi 2, claiming that Georgian actors are far more appreciated in Russia.

On July 9th, 2021, the Facebook page of the organization has published a video stating that one of the leaders of “Solidarity for Peace,” Archil Bubuteishvili, has participated in an international conference, “Russia-South Caucasus.” Bubuteishvili has tackled issues such as the need to revive the relationship between the two nations and underscored the role of the youth in the process. Bubuteishvili stressed that the organization seeks to utilize the existing shared religion and identity and foster public diplomacy and direct dialogue between Georgia and Russia. Bubutishvili also underscored the growing number of actors that seek to slow down resolving disputes. 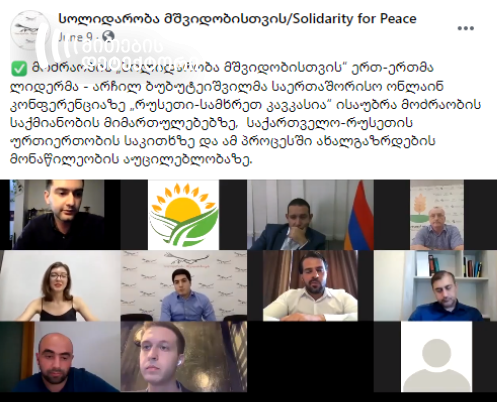 “Solidarity for Peace” has also issued a statement regarding the violent events of July 5th, where it blamed the journalists for being not impartial and putting psychological pressure on the population:

“People and Journalists stopped healthy communication when the latter took a political stance. Instead of showcasing the public attitude and opinions regarding LGBT rights, the media started to propagate it. This is a deliberate attempt to provoke the population and invoke anger. Aggression creates further aggression. This is a natural law, and the centuries have demonstrated its absolute truth.”

As for “Tbilisi Pride,” the movement labels the organization as a liberal propaganda machine, seeking not to protect the minority rights but to segregate them from society and destabilize the state.