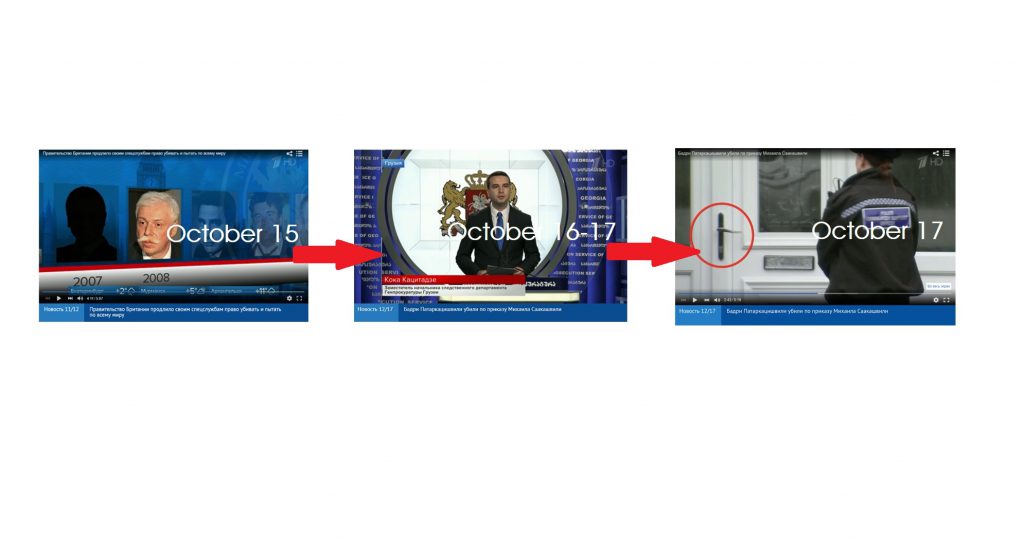 On October 15, 2018, Channel One, Russia’s largest state-run TV channel, aired the story by Timur Siraziev titled “The British government extends the rights for its Special Forces to kill and torture throughout the world.” During the entire story, the author tries to link high-profile murders of former KGB agents, attempted murders, as well as deaths of some persons associated with Russia, including Boris Berezovsky and Badri Patarkatsishvili, to MI5, UK’s domestic counterintelligence and security agency.

Timur Siraziev, correspondent: “Among the deceased is Boris Berezovsky, whose death was recognized as mysterious even by the British court, because it failed to determine whether it was a murder or a suicide. But, it is beyond any doubt that Berezovsky was cooperating with British Special Forces. He was recruited by an agent named Pablo Miller – the same Pablo Miller, who also recruited Alexander Litvinenko – later he was killed in London – as well as recently poisoned Sergei Skripal. So, the question arises – why do the agents of British special forces become the victims of criminals exactly when it is so favorable for their employers?”

Andrey Lugovoy, Russian MP: “Pay attention: in that period [during Patarkatsivhili’s death], Saakashvili enjoyed the U.S. support in the presidential elections and definitely Badri Patarkatsishvili was a hindrance for the Americans too. It means that if the British had any information about Saakashvili’s links to Badri’s death or about his unnatural death, and if we take into consideration the interaction between the American and British Special Forces, they could have simply concealed it.”

In the audio recording released by the Georgian prosecutor’s office, smearing a poisonous substance on the door handle is named as one of the means for alleged murder of Badri Patarkatsishvili. The story aired by Russia’s Channel One draws parallels with the Sergei and Yulia Skripal case who were poisoned with a nerve agent smeared on the door handle.

Kirill Braynin, correspondent: “A collocation “smear on the door handle” heard in the audio tape recorded in 2007 sounds as a greeting from the future. But in the present, it arouses doubts among many people that someone might have helped or at least might not have obstructed the implementation of this courageous intent.”

After the British police accused two Russian citizens, who later appeared GRU agents, of poisoning Sergei and Yulia Skripal, the pro-Kremlin media undertook efforts to overshadow the issue by counter-accusations. Initially, it targeted the United States and the Lugar Laboratory in Georgia, as if it was not Russia using nerve agents in Britain, but it was the United States developing biological weapons near and against Russia. Now, Great Britain is the target of attack. The pro-Kremlin media outlets are creating conspiracy theories, linking the deaths of Russian oligarchs and the persons associated with Russia to British Special Forces. It should be noted that the charges brought by the Georgian prosecutor’s office against the persons allegedly involved in Patarkatsishvili murder case were preceded by the story involving the doubts about the Georgian business tycoon’s death.

Timeline of events in Russian media related to “Patarkatsishvili case”

Timur Siraziev, correspondent: “British Special Forces can kill you, torture you and commit other crimes… only questions and no answers about doubtful deaths of our citizens in Britain. 14 persons associated with Russia have died in the “Kingdom” over the last 15 years, among them Nikolai Glushkov, Aleksandr Perepilichny and Badri Patarkatsishvili.” 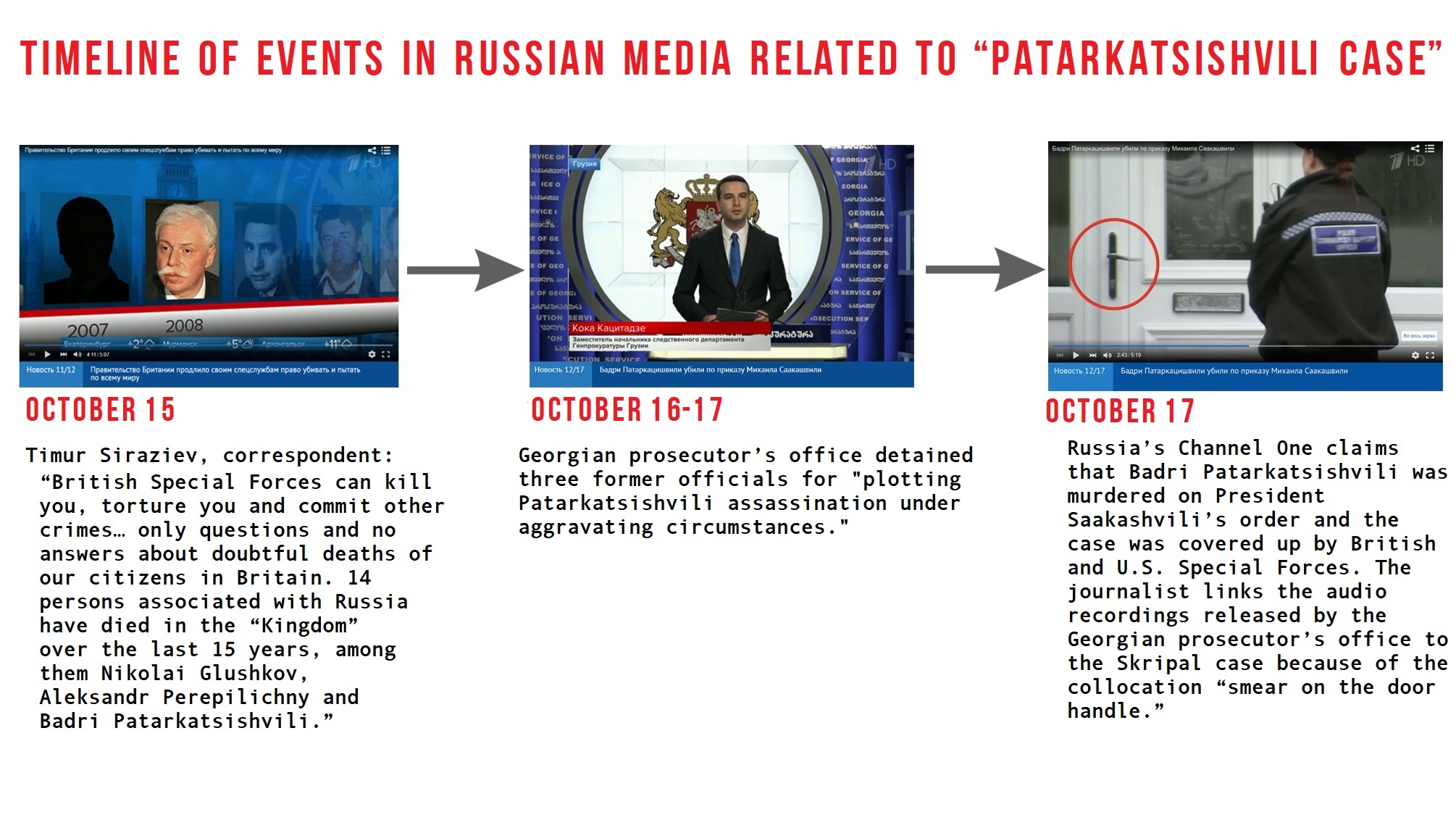 Badri Patarkatsishvili was Boris Berezovsky’s close associate and his business partner. Like other oligarchs, following Putin’s consolidation of power, he had to leave Russia. Initially, Badri Patarkatsishvili supported Mikheil Saakashvili, but later they turned into opponents and he was even charged with an attempted coup.

Badri Patarkatsishvili was found dead at his home in Great Britain in February 2008. According to the British investigation, he died of heart failure.

On October 17, 2018, the Georgian prosecutor’s office released an audio tape recorded in 2007 and said that it has charged three former officials of the Interior Ministry’s Department of Constitutional Security with plotting Patarkatsishvili assassination under aggravating circumstances. The prosecutor’s office said that according to one of the interlocutors, Patarkatsishvili’s murder was sanctioned by Saakashvili.

According to OC-media, which contacted British police, the Georgian authorities did not inform British police of tapes they had recovered. The Georgian prosecutor’s office claims that plotting the assassination and the death of Patarkatsishvili are two independent cases.

Boris Berezovsky was a government official in the 1990s and a close associate of Russia’s first President Boris Yeltsin. He amassed his wealth importing Mercedes cars into Russia. In 2000, when Vladimir Putin was elected the President of Russia, Berezovsky left the country. Later he was charged with embezzlement and swindling in absentia. In 2003, he was granted asylum in Britain.

In 2003, Alexander Litvinenko said that Russia’s ФСБ (Federal Security Service) planned to murder Berezovsky. According to BBC, a man was arrested in central London in June 2007 on suspicion of conspiracy to murder.

Berezovsky was found dead at his home in Sunninghill. The coroner at the inquest into Berezovsky’s death later recorded an open verdict.

Berezovsky’s daughter said that there were “a number of people” who would like to see her father – on outspoken critic of the Russian president – killed. In the interview with The Telegraph, Elizaveta Berezovskaya noted that she initially believed her father committed suicide; however she said she was now concerned her father, who had been subject to two assassination attempts, may have been poisoned. She added that she felt the police investigation had “not answered all the questions.”

Berezovsky accused the Kremlin of killing Litvinenko. He was a long-time opponent of the Kremlin and Russian exile in the UK.