Recurring disinformation about the undemocracy of the European Parliament 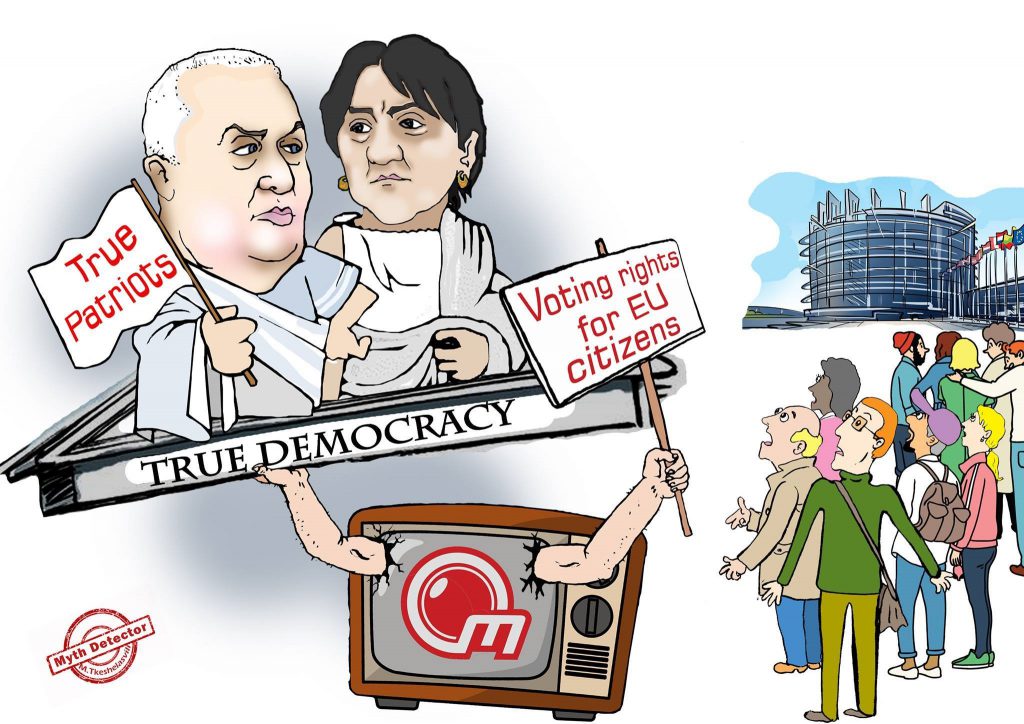 Gia Areshidze, anchor:  “I said that it is a dreadful union with all its structures and institutions. All of this is on the account of its undemocratic in spirit. Who chooses whom; there was no direct link between the electoral college and Parliament… If the EU is not democratic and does not have a democratic position in its broadcasting and its journalists, then why should I want to be a part of it? I do not want to enter such union, where such is the broadcasting standard and people are left with no clear position. ”

This aforementioned claim is deceptive because citizens of EU member countries elect the European parliament members through direct elections, while the Lisbon Treaty reinforces the representative democracy of the European Union.

Fact 1: Members of the European Parliament are elected by direct universal suffrage.

The European Parliament is the EU’s legislative body, which is coted in once every 5 years through direct election by the citizens of the 28 member states.

European Parliament member quota is directly proportionate to the population number of the member state. In spite of differences in voting traditions of each member country the elections for the EU parliament are conducted at the same period of time though with different voting system and the results are announced simultaneously.

According to the regulations, the voting happens by proportional system, which allows small parties a chance to have their vote represented in the European Parliament. In addition, member states have a lot of leeway in a number of matters related to voting procedures. e.g. The allocation of their own election district boundaries according to their will.

Fact 2: After the signing of the Treaty of Lisbon, the EU decision-making system developped into being more open and transparent.

The Lisbon Treaty, which was signed on 13 December 2007, has the goal to enhance the EU representative democracy.

Fact 3: Citizens of member states of the European Union have at their disposition a variety of ways to participate in the political processes.

Lisbon Treaty Article 11.4 directs that upon signing of a request by a million inhabitants of the EU, the European Commission must submit a draft law to be voted on.

When the European Commission starts working on a new initiative or to revise an existing law, it often holds public consultations. Individuals, enterprises or organizations who have an interest in or knowledge of the issues considered, can take part in the development of European Commission’s legislative proposals.

Throughout the EU member countries dialogs are held with citizens, where they are given the opportunity to express their opinion about matters at hand.

If a particular political issue concerns any individual, business or organization directly, they have the opportunity to submit a petition to the European Parliament on this matter.

Interested individuals or organizations can register on online registration system managed by the European Parliament and the European Commission, where they can get the required information.

An affirmation of the same nature, as if the EU has an overly bureaucratic and undemocratic system, was made by the head of Global Research Center, Nana Devdariani in January 2017.

About ‘Obieqtivi’: Media Union ‘Obieqtivi’ was established in August 2010. Among the founders was current Secretary General of a political party ‘Patriotta aliansi’ Irma Inashvili, who is no longer included in a management position of the station since 2014. Party office and TV station are located in the same building. ‘Obieqtivi’ broadcasting capabilities include TV frequency, radio frequency, and is also carried out via the Internet. The editorial policy of media-holding ‘Obieqtivi’ is turkophobic, xenophobic and homophobic. European Commission against Racism and Intolerance (ECRI) in its fifth cycle report, based on an MDF survey, recommend to the Georgian government, not to sign a contract, or in the case of existing contracts with such the media outlets that inflame hatred to terminate them. TV ‘Obieqtivi’ was included in the report as one such media outlet.