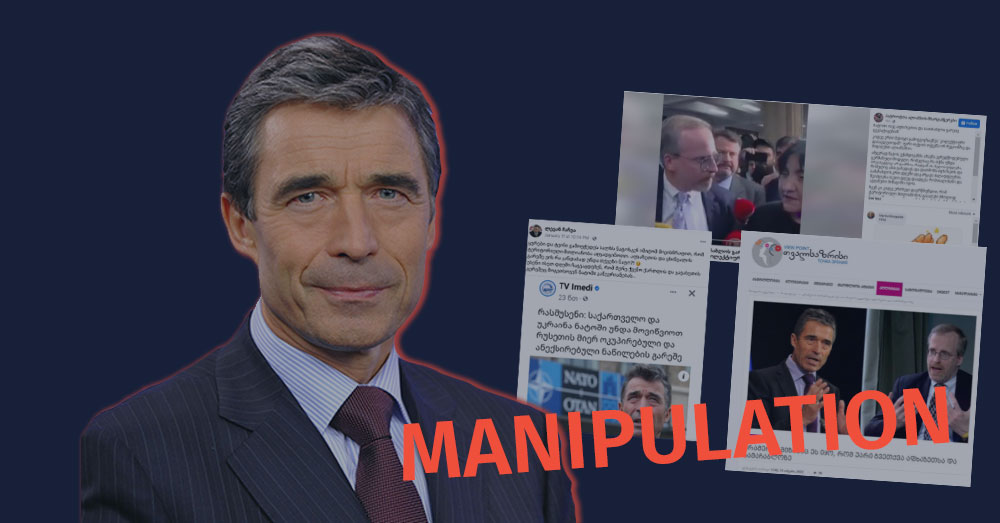 After the North Atlantic Treaty Alliance responded clearly and unanimously to Russia’s ultimatum, stressing that NATO would notreconsider its open-door policy towards the former Soviet republics, pro-Kremlin actors on Georgian social networks started to resurface the topic of Article 5 of NATO concerning collective defense.

“We should invite Georgia and Ukraine to NATO without their occupied territories” – the statement by Anders Fogh Rasmussen, the former secretary-general of NATO, given to Imedi TV was disseminated by the following pro-Kremlin actors: Levan Chachua, the chair of the pro-Kremlin ‘Georgian Idea’ party; Facebook user Otar Danelia, who affiliates himself with ‘Alt-Info’s’ newly-created ‘Conservative Movement;’ Konstantine Chikviladze, author at the pro-Kremlin outlet ‘Georgia and World,’ who has links with another pro-Kremlin outlet ‘NewsFront Georgia;’ Facebook page ‘Supporters of the Alliance of Patriots of Georgia;’ Irakli Jankarshvili, author at another pro-Kremlin outlet ‘Tvalsazrisi.’ The aforementioned actors sought to convey the idea that NATO does not care about the occupied territories of Georgia and if joining NATO, Georgia would have to give up on Abkhazia and so-called South Ossetia. 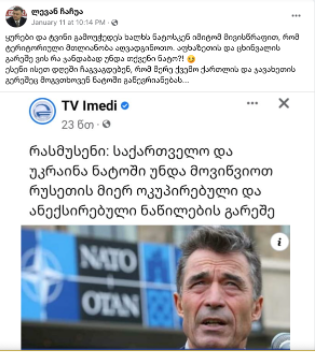 The claim that NATO offers Georgia to join the alliance without the occupied territories and thus encourages it to renounce its territorial integrity is manipulative. In fact, Luke Coffey’s initiative, later voiced by Rasmussen, calls for Georgia’s rapid integration into NATO, with Article 5 of the NATO Charter on Collective Defense extending to the Russian-occupied territories of Georgia only after the restoration of territorial integrity.

Similar manipulation, as if NATO membership would result in the permanent loss of the occupied territories of Georgia, has been circulated by pro-Russian and pro-Kremlin parties for years. This issue became especially relevant after the publication of the report of the Heritage Foundation reviewer, Luke Coffey, in which he presented his views on Georgia’s rapid integration into NATO. According to Coffee’s initiative, in order for Georgia to accelerate its integration into NATO, Article 5 of the Charter should be extended to the territories of Georgia occupied by Russia after the restoration of Georgia’s territorial integrity within its internationally recognized borders.

This very initiative was voiced by the former NATO Secretary-General Anders Fogh Rasmussen at an international conference organized by the Center for Economic Research and the McCain Institute:

Anders Fogh Rasmussen: “If one day, we consider Georgia ready to join the alliance, we also have to make sure that Article 5 is still credible, which would require NATO to actually help Georgia if Georgia is attacked. But obviously, it is a problem to have unresolved border disputes with Russia in Abkhazia and South Ossetia. So the question is how that could be solved? I think you have to discuss internally in Georgia, would you, in that case, be willing to accept arrangements when NATO’s Article 5 will only cover the territory that is actually controlled by the Georgian government, and in NATO we also have to reflect on the exact same question.”

Rasmussen used the example of Germany when West Germany joined NATO under the same conditions in 1955, and after the German unification in 1991, the NATO Charter was extended to East Germany as well.

The same initiative was mentioned by Rasmussen in an interview with ‘TV Imedi,’ aired on January 11th. Parts of the interview were also published on their website, including Rasmussen’s outlook on Article 5 and the example of Germany.

Anders Fogh Rasmussen: “I am in favour of such an option to be considered, and this is my offer. During the Cold War, Germany became a member of NATO without East Germany. This area was not under the control of the government of West Germany. We still allowed West Germany to join the alliance. I think we can do exactly the same in the case of Georgia and Ukraine. Let’s say yes, Georgia can join NATO, but because South Ossetia and Abkhazia are controlled by Russia, these two occupied regions are not covered by Article 5 of NATO. The same scenario can be applied to Ukraine. We have a precedent and should consider this model. By doing so, we will avoid a situation where Russia, as a gatekeeper, decides when to open the door to NATO.” (Translation by Myth Detector)

However, in another excerpt of the interview published on Imedi’s website, published by pro-Russian actors, the context is not clear, and the headline gives the impression that Rasmussen is talking about Georgia joining NATO without the occupied territories. 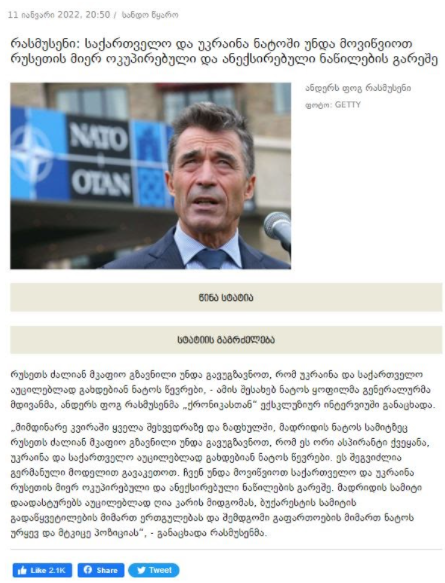 For more on the topic, see the previous articles prepared by “Myth Detector:”