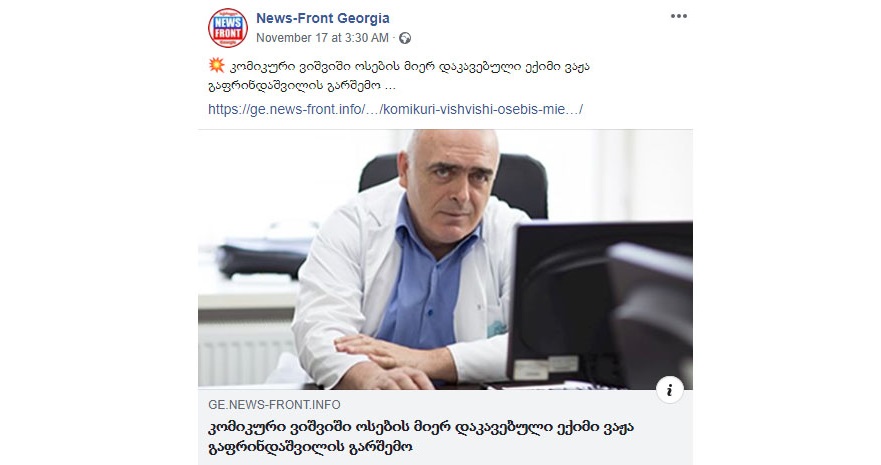 On November 17, News Front, a Georgian-language website of pro-Kremlin online media outlet, released an article headlined “Comic Laments around Doctor Vazha Gaprindashvili Detained by Ossetians.” The article criticizes the opposition, who according to News Front, “is lamenting in front of TV cameras,” further aggravating the situation, as well as Georgian doctor Vazha Gaprindashvili, whose “stubbornness and refusal to acknowledge that he is on the territory of so called South Ossetia” is unacceptable to News Front.

News Front: “It is unacceptable that Vazha Gaprindashvili turns stubborn and puts himself in danger only for signing some pointless papers, where the word “border” is mentioned. Well, it is good that Mr. Vazha Gaprindashvili, like any other Georgian, believes that Georgia’s border lies at the Roki Tunnel, but you, as a doctor, should also understand that you should not put the country in an awkward situation – considering the current deplorable situation!”

The pro-Kremlin media outlet puts the blame on Vazha Gaprindashvili and Georgian opposition parties rather than the occupying regime. News Front notes that calling Russia an occupier is “a poor attempt” of exerting pressure on Russia, adding that nobody will be able to frighten Russia with it.

News Front: “Rather than search the ways for normalization and dialogue to avoid similar facts, the government is further inciting tensions…shortly speaking, better to hold a dialogue with Russia than call it an occupier! Georgian-Russian dialogue will become a precondition for Georgian-Ossetian and Georgian-Abkhaz dialogue.”

Tbilisi-based doctor, Vazha Gaprindashvili was detained by Russia-backed Tskhinvali region’s “state security committee” near the occupation line with Akhalgori Municipality on November 9. He was charged with “illegal border crossing” and sentenced to two-month pretrial custody. Gaprindashvili’s family claims that the doctor left for Akhalgori to provide medical aid to those patients, who fail to move to the other side of the administrative boundary line. Vazha Gaprindashvili does not acknowledge that he is on the territory of another state and considers Tskhinvali to be Georgia’s occupied territory.

Facebook page of Georgian-language News Front was created on October 13, 2019 and it has links with openly pro-Russian actors, like Georgia and World, Eurasian Union, Patriot TV, as well as Politicano, affiliated with the Yevgeny Primakov Public Center, which mainly manipulates with socialist issues, trying to incite Soviet nostalgia.Simultaneously, News Front’s Facebook page administers a public group “Россия и Грузия- дружба навеки!” (Russia and Georgia – Friendship Forever). The group was created on September 11, 2014 and it changed its name three times since then. On February 4, 2019, the group changed its name twice – initially it was named Kidobani and then Kidobani News. The group chose the name “Россия и Грузия- дружба навеки!” on August 4, 2019. Besides News Front Georgia’s page, the group has six other admins. News Front Georgia’s page also has six admins.