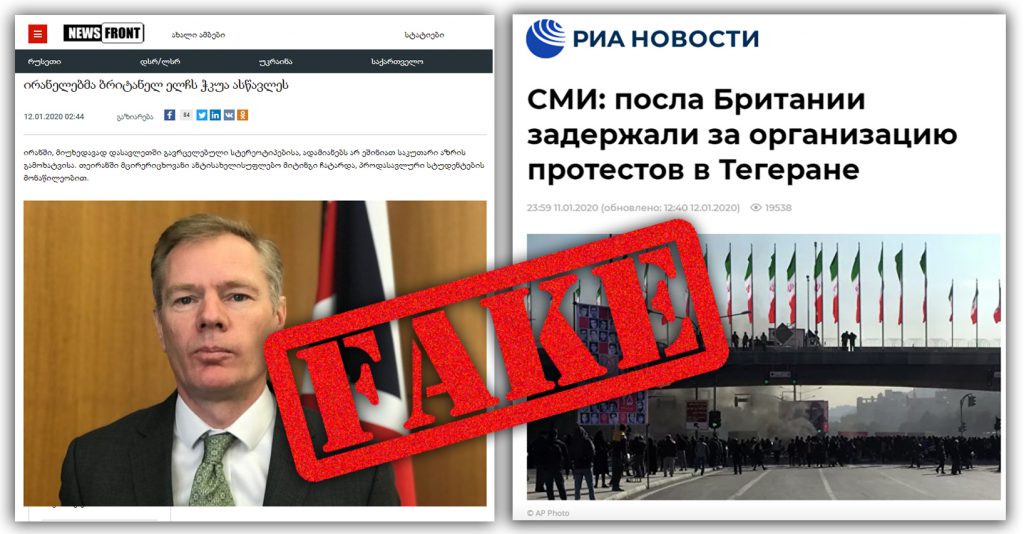 On January 12, a pro-Kremlin media outlet News Front Georgia released an article headlined “Iranians taught the British ambassador a lesson.” The article is about the arrest of British Ambassador to Iran, Rob Macaire for allegedly taking part in the protests. News Front Georgia claims that Ambassador Macaire organized anti-government demonstrations in Tehran over the shooting down of a Ukrainian airliner; moreover, according to the same source, he was giving instructions to protesters and filming the rally. The article also notes that the United States has no embassy to Tehran and therefore, the Americans cannot stage a coup in Iran.

A number of other pro-Kremlin media outlets, including Ria Novosti, Sputnik.kg, gazeta.ru, Russia Today, lenta.ru also spread information as if the UK Ambassador was arrested for organizing protests. All of them referred to Iranian Tasnim News Agency as their source.

The claims by the pro-Kremlin and Iranian pro-government media outlets as if the UK Ambassador spearheaded the protests in Iran represent disinformation. Iranian officials noted that his arrest was misunderstanding; the Ambassador himself denied the participation in the rally.

BBC and Telegraph reported that the UK Ambassador attended a vigil for those who died when Iran’s military shot down a passenger plane and left once the vigil turned into a protest. Macaire was arrested on his way back to the embassy. Rob Macaire confirmed in his Twitter post that he was not taking part in any demonstrations, noting that he “left after 5 minutes, when some started chanting.” Macaire was released shortly after arrest.

Iran’s Tasnim News Agency, referred to by the pro-Kremlin media outlet as the source, is a semi-official agency having strong links with the Iranian Revolutionary Guards Corps (IRGC). Information as if the UK Ambassador led the protests has not been confirmed by official sources.

The Iranian Deputy Foreign Minister and the Iranian Ambassador to the UK said that Macaire’s arrest was misunderstanding.