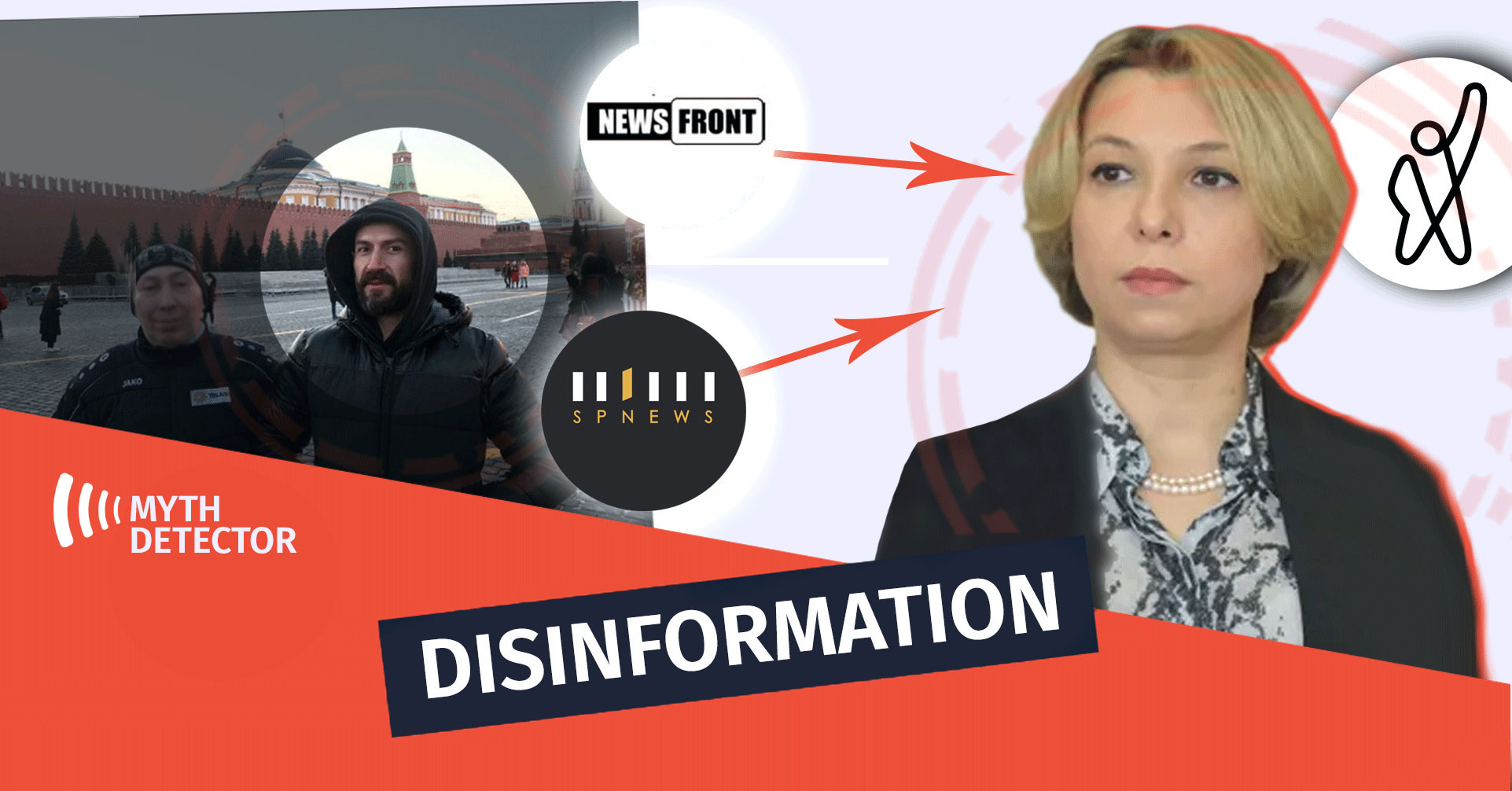 On November 20th, the Georgian version of the pro-Kremlin “News Front” and the pro-governmental “Spacenews.io” published a Facebook post by the founder of the Caucasus Center for Islamic Studies,Shota Apkhaidze. Apkhaidze claims that the Public Defender and Formula TV received 580,000 EUR from the Armenian organization Patterson Belknap, the French Kagan Foundation and the Russian Diaspora of Javakhk for closing the Georgian orphanage in Ninotsminda. An identical post was published on November 20th by the Facebook page “Black Media” and Facebook userMikheil Amisulashvili and on November 24th by Alt-Info supporterTemo Bokelavadze. 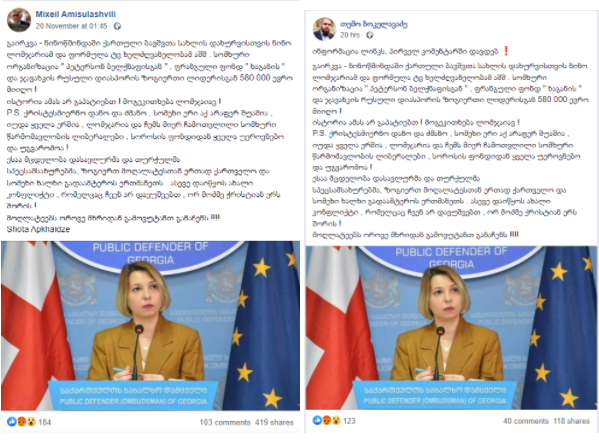 The information disseminated on social media is false. The Public Defender is obliged by law to study the situation in the Ninotsminda children’s school, while the removal of children with disabilities from the house was the decision of the local court. Information about the involvement of Armenian, French and Javakhk Russian organizations in this process and their financial motivation is a conspiracy. Both the Public Defender’s Office and Formula TV have denied any connection with the aforementioned organizations. The pro-Kremlin media outlet News Front, on the other hand, has spread disinformation against Nino Lomjaria in the past as well.

In order to verify the information, “Myth Detector” contacted the Public Defender’s Office. According to Ani Tamazashvili, head of the public relations department, the office has no connection with either the Armenian organization Patterson Belknap, the French Kagan Foundation, or the Russian Diaspora of Javakhk. Therefore, the Lomjaria has not received 580,000 EUR from them. Zuka Gumberidze, the Executive Director of Formula TV, has also denied the connection with the organizations mentioned above.

Disinformation against Nino Lomjaria was disseminated by the pro-Kremlin outlet “Newsfront” in the past when the Public Defender expressed a critical position on the condition of the children’s rights in the Ninotsminda. Lomjaria shortly became a target of other actors as well. The Public Defender of Georgiarequested to enter the Ninotsminda orphanage and study the situation on the ground. Eventually, after extensive efforts, the staffmanaged to enter the site, and thecourt instructed the state to ensure the removal of children with disabilities from the orphanage.

Shota Apkhaidze joined the Eurasian Institute, headed by Gulbaat Rtskhiladze, after he was released from custody as a political prisoner following the change of the government in 2012. He was convicted for bursting into the studio of Kavkasia TV in 2010, together with the representatives of Orthodox Parents’ Union and People’s Orthodox Movement, and committing a hate crime. In 2015, Apkhaidze founded the Caucasus Center for Islamic Studies. Prior to his detention, Apkhaidze served as a publicist for Malkhaz Gulashvili’s media holding Georgian Times. Malkhaz Gulashvili was also the chairman of the People’s Orthodox Movement, which was formed in 2010. At that time, Apkhaidze was named as one of the members of this movement and stated as the chairman of the youth movement “Forward”. In the Georgian version of the pro-Kremlin outlet “NewsFront,” Shota Apkhaidze was indicated as the editor; nonetheless, he has later denied the fact.

A Georgian-language website of pro-Kremlin media outlet News Front emerged on the Georgian media market in October 2019. The news agency News Front was registered on the Russian web hosting server reg.ru in November 2014. The website’s IP address is located in the Russian town of Rostov. Until recently, News Front was spreading news in eight languages – Russian, German, English, Serbian, Spanish, French and Hungarian. In October, the Georgian language was added to the platform. News Front recognizes the independence of Ukrainian territories – Donbas, Luhansk and Crimea and its editorial policy is identical to the Kremlin’s agenda.

Spacesnews is characterized by a partially hybrid editorial policy, where, on the one hand, one can observe the presence of state experts and informational campaigns sponsored by municipalities, while, on the other hand, the same outlet shelters Giorgi Mdivani, the author of “Politicano”- Media project linked with Kremlin Primakov Center. Moreover, Spacesnews opts for the limited selection of comments that appear on its website, which fosters the invocation of anti-Western sentiments. The outlet often utilizes the technique of false dilemma, which confronts orthodox Russia with the sovereignty-breaching West. According to the research conducted by ISFED in 2021, “Spacenews” is closely tied with pro-Kremlin “NewsFront.” Apart from “NewsFront,” the 2019 MDF report, in addition to further observations, confirms the alleged coordination among Kremlin-tied “Politicano,” “Georgia and World,” Eurasian Youth Union and Eurasian Institute. According to the information accessible in the electronic Database of the State Procurement Agency, in 2020-21, for informational and advertisement purposes, state budgetary organizations have contracted with spnews.io (Spacesnews) to provide services worth GEL 43 849.75.

Mikheil Amisulashvili is one of the supporters of the “Georgian March.” According to Transparency International, the Ministry of Internal Affairs has launched aninvestigation around

Amisulashvili’s insulting and threatening comments againstTatia Dolidze. Amisulashvili was arrested on March 20th, 2018, due to anincident at “Rustavi 2”. The investigation accuses him of deliberate hooliganism. He has beenconvicted of violence twice before. 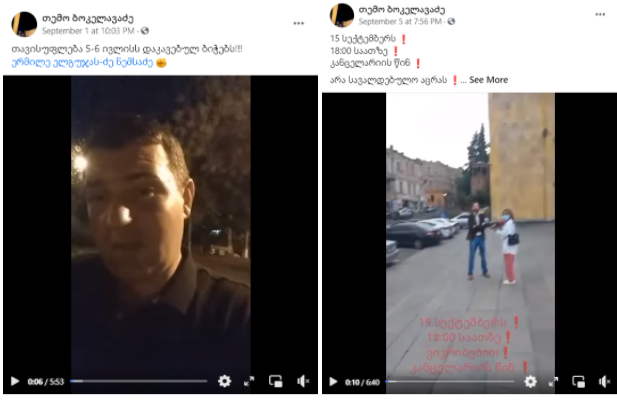 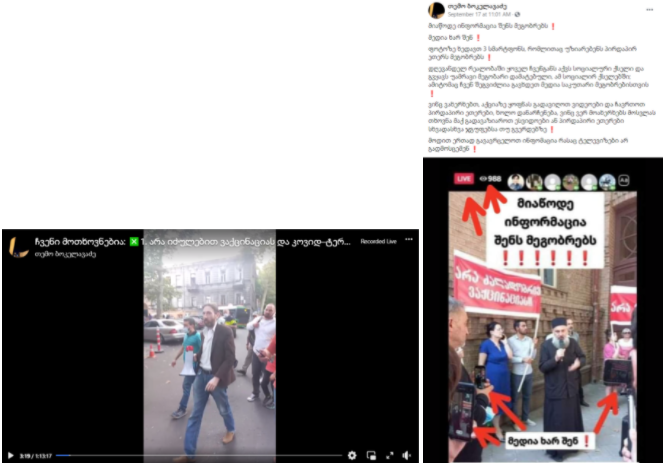 The Facebook page “Black Media” published posts that are directed against vaccination and the Georgian opposition. At the same time, the page supports “Alt-Info”. The Facebook page also publisheddisinformation on October 31, where in a photo altered by Photoshop, the General Director of Mtavari Arkhi, Nika Gvaramia, and the journalist of the same channel, Giorgi Gabunia, are kissing each other. 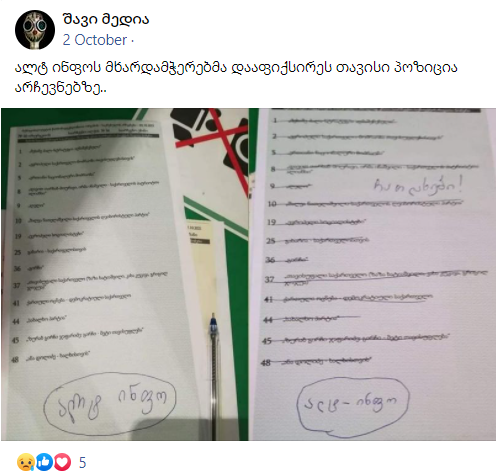 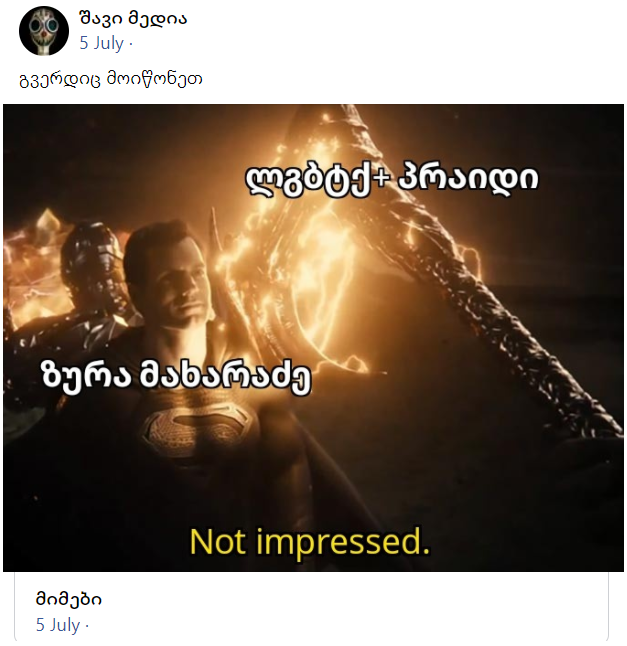 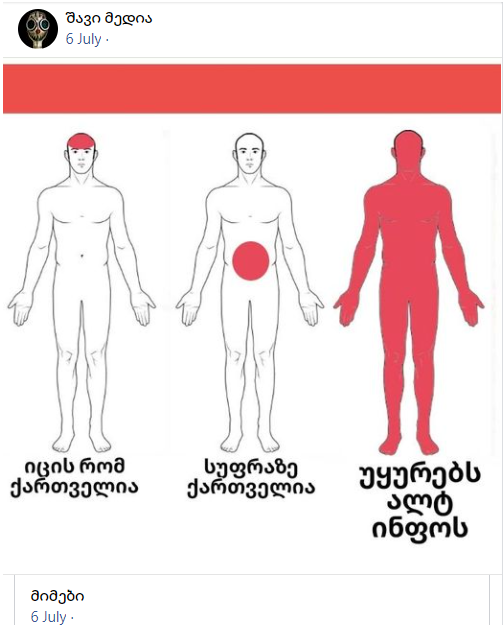