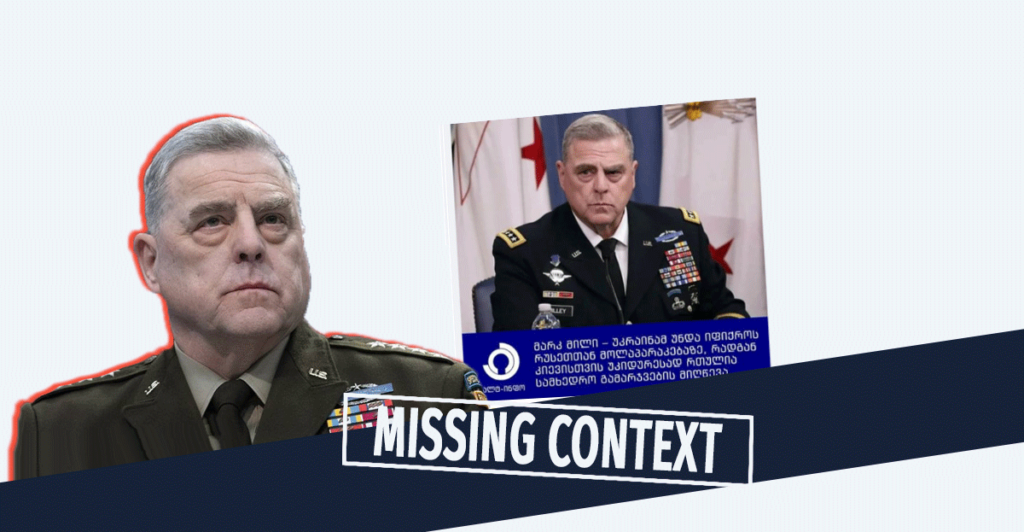 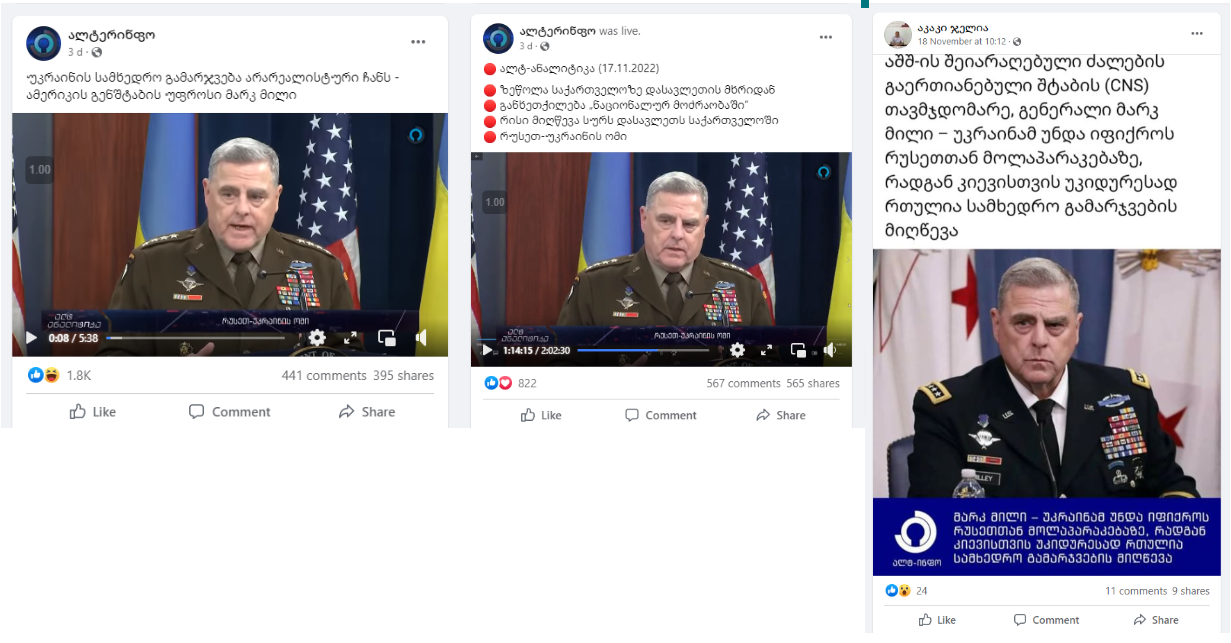 The quote of Mark Milley is being disseminated without context. Milley never said that Ukraine should start negotiations with Russia because it will be impossible for it to achieve a military victory. According to Milley, achieving a complete military victory may be impossible for both sides, and the military advancement achieved by Ukraine will present Ukraine as the stronger side of the conflict, which is a profitable position for negotiations.

Chairman of the Joint Chiefs of Staff of the US, Mark Milley, spoke about the Russia-Ukraine war at a press conference held with US Defense Secretary Lloyd Austin on November 16th after the Ukrainian defence contact group meeting.

Reporters asked Milley to clarify a statement he had made a few days earlier that winter would likely pause the war, opening a window of opportunity for negotiations between the sides, and that a military victory might not be achieved.

The hosts of Alt-Info showed only the part of Milley’s answer where he talks about the difficulty of achieving military victory in the war. It is also worth noting that the translation contains the phrase “Ukraine should think about negotiations with the Russian Federation because it is extremely difficult for Kyiv to achieve a military victory”, which creates the impression that Milley supports the idea of ​​negotiations because of Ukraine’s military failures.

The complete version of the quote:

“But Kherson and Kharkiv, physically, geographically, are relatively small compared to the whole, so that that — the military task of militarily kicking the Russians physically out of Ukraine is a very difficult task. And it’s not going to happen in the next couple of weeks unless the Russian army completely collapses, which is unlikely.

So, in terms of probability, the probability of a Ukrainian military victory defined as kicking the Russians out of all of Ukraine to include what they define or what the claim is Crimea, the probability of that happening anytime soon is not high, militarily. Politically, there may be a political solution where, politically, the Russians withdraw, that’s possible. You want to negotiate from a position of strength. Russia right now is on its back.”

The full version of Milley’s response makes it clear that he is not talking about the possibility of negotiations because of Ukraine’s weakness or its low chances of winning the war.

At the beginning of the answer, Milley reviews Ukraine’s military successes in Kherson and Kharkiv, which, according to him, resulted in huge losses for the Russian army both in terms of human casualties and weapons.

After describing Ukraine’s military successes and Russian losses, Milley noted that it is desirable to pursue negotiations from the position of a stronger actor when the opponent is weakened, and this fact opens up the possibility of a political solution.

In addition, US Defense Secretary Lloyd Austin noted that the decision on when to start negotiations should be made by Ukraine and that the United States will continue to help Ukraine both to protect civilians and to achieve the military goals they have set in the process of returning their sovereign territory.