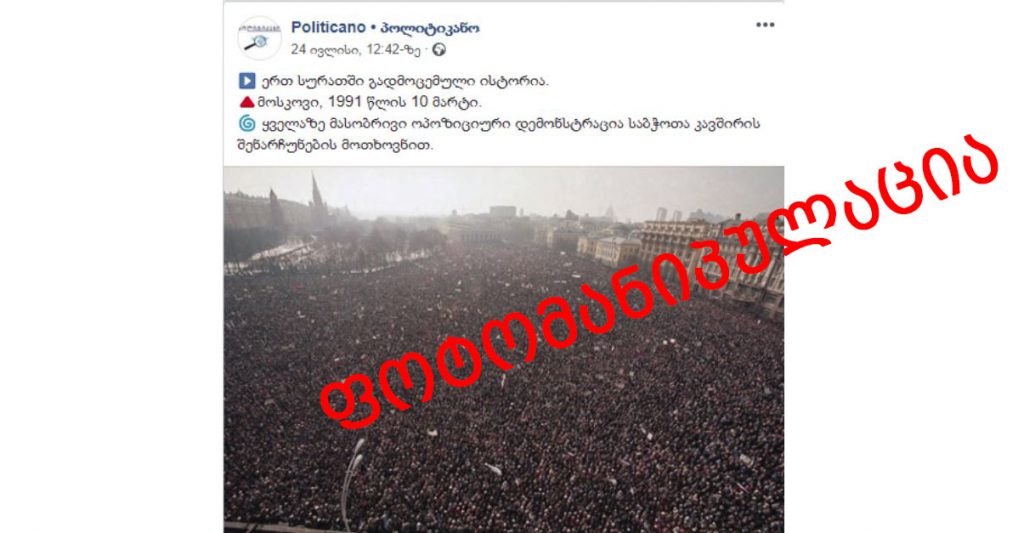 On July 24, a Facebook page, Politicano, published a photo, accompanied with a description which said that it showed the largest demonstration demanding the preservation of the USSR in Moscow, on March 10, 1991. The photo published by Politicano is edited and contains cloned sections. The original photo was taken by an Associate Press photographer, Dominique Mollard, and shows a mass demonstration held at Manezh Square in Moscow, on March 10, 1991. A political party – Democratic Russia, as well as Moscow Association of Voters and Memorial society were among the organizers of the manifestation. The main demands of the manifestation included resignation of Mikhail Gorbachev, supporting Boris Yeltsin, and an active participation in the referendum that was to decide the future of the Soviet Union. Up to 500 thousand people attended the demonstration. It was one of the largest mass protests during the 73-year Communist rule. The referendum regarding the future of the USSR was held on March 17, where 76% of the voters supported the preservation of the USSR.

The edited photo has been discovered by the readers of The Atlantic, which, in turn, is connected to another manifestation.

On February 4, 2012, tens of thousands of people came out in -19 degrees, demanding the resignation of the President of Russia, Vladimir Putin. The photos of the manifestation were actively disseminated on Facebook, Tumblr and other platforms. The photo used by Politicano was one of those that were misleadingly used as showing the 2012 manifestation. Several readers, who noticed the cloned sections, contacted The Atlantic.

With the purpose of verifying the authenticity of the photo, The Atlantic contacted an information agency Associated Press, where, after a brief research, it was confirmed that the photo was edited with the aim of removing the lens flare effect. Associated Press stated that such photo editing was against their values and principles. Later, Associated Press deleted the edited version of the photo in its archives and replaced it with the unedited one.