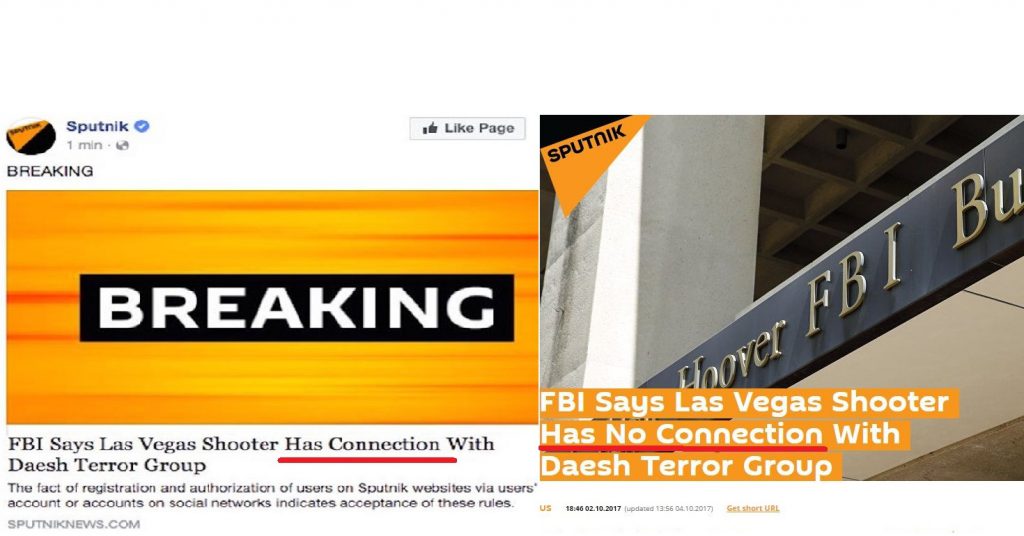 On October 4, the Facebook page “Politicano” criticized Western mainstream media outlets for their coverage during the tragedy in Las Vegas and denounced them for having double standards. The proof for such view was the referral as a “shooter” instead of “terrorist” by the media for the suspect, Stephen Paddock. According to “Politicano”, if a black or a Muslim would kill even 1 or 2 western citizens, the media would automatically declare it as a terrorist act. As stated by the facebook page, the rationale behind the use of double standards is the need of Western media not to circulate the idea that modern terrorists are western nationals. In the coverage of events and issues related to terrorism, the professional media employs the standards that prevent wrong interpretations of the events and the creation of false representations in society. This standard applies equally to any person regardless of ethnic or religious identity.

According to  UNESCO,  BBC and  Reuters, during the news coverage use of words such as terrorist or terrorism must be prevented, as priority should be given to the description of the event and not its qualification. While utilising indirect citation it is paramount to clarify to the audience that the quotations are derived from source/respondents and not from media sources themselves. There should be no quotaion mark delimiting certain terms and the use of the phrasing “so-called” in front of a designation must be avoided, since such formulation may indicate a subjective assessment by the journalist. The terrorist act and its backdrop must be objectively described. The journalist must work with an emotionless and impartial language in order for the audience to form a view by itself of the event based on the facts provided by the media. For these reasons, it is recommended to use specific terms such as “attacker”, “bomber”, “kidnapper”, “armed person”, etc.

On October 1, Stephen Paddock, opened fire on the attendees of a music festival in Las Vegas from the 32nd floor of a hotel,  resulting in 58 deaths and more than 500 injuries. The offender committed suicide, the motive behind the crime remains  unknown  for the police. One day after the incident, the Internet was flooded with fraudulent news articles related to the tragedy that were published by tabloids and pro-Kremlin media companies.

As  investigated by The New York Times, on October 2, there appeared to be false information on the Internet, as if:

All three of the above statement are fraudulent. Their propagation is associated with specific Google and Facebook algorithms. In particular: 4Chan’s ultra-right trolls connected the mass shooting with another person, Geary Danley. Accordingly, before the police could identify the real shooter, Geary Danley was already being searched throughout the Internet space as the responsible for the act. On the social network Facebook, the content of the website Alt-Right News was spread, where the shooter was wrongly identified and referred to as an “anti-Trump liberal”. Google and Facebook have linked the spread of false news with an algorithmical mistake and said they were working to eradicate the problem. The problem was touched also  Youtube, which has already altered algorithms, as videos about the shooting in Las Vegas had been uploaded to the portal which have become sources for violent and false conspiracies. According to the Atlantic Council’s  DFRLab, the social network Twitter was also affected where Kremlin policy supporters have shared the content of conspiracy theories with the hastag  #IStandWithRussia. Disinformation by Sputnik News and conspiracies by Veterans Today

In connection with the tragedy in Las Vegas, the Russian government-controlled “Sputnik” published an editorial with the headline “F.B.I says, the Las Vegas shooter has links with the terrorist group known as Daesh“. The material was placed on Facebook’s “Trending Topics” and the social network users perceived it as real news. “Sputnik” later removed the  article and publishing a new one, but this time with the opposite header “According to F.B.I, Las Vegas shooter has no connection with the terrorist group known as Daesh”.

Another Kremlinist media outlet  Veterans Today published an article by own editor Kevin Barrett, which suggested that the mass murder in Las Vegas was staged and the US government is responsible for it. The material is built on unreasonable considerations and is not based on any valid source. The dispersion was due to the tabloids and social networks, mainly to Facebook, and was shared a total of 2800 times.

As uncovered by  DFRLab, since 2013 Veterans Today is a partner of the International Relations Magazine “New Eastern Outlook”, published by the Kremlin-funded Russian Academy of Sciences. Veterans Today is also cooperating with the English-language South Front, registered also in Moscow, which mainly disseminates misinformation about Russia’s military operations in Syria.