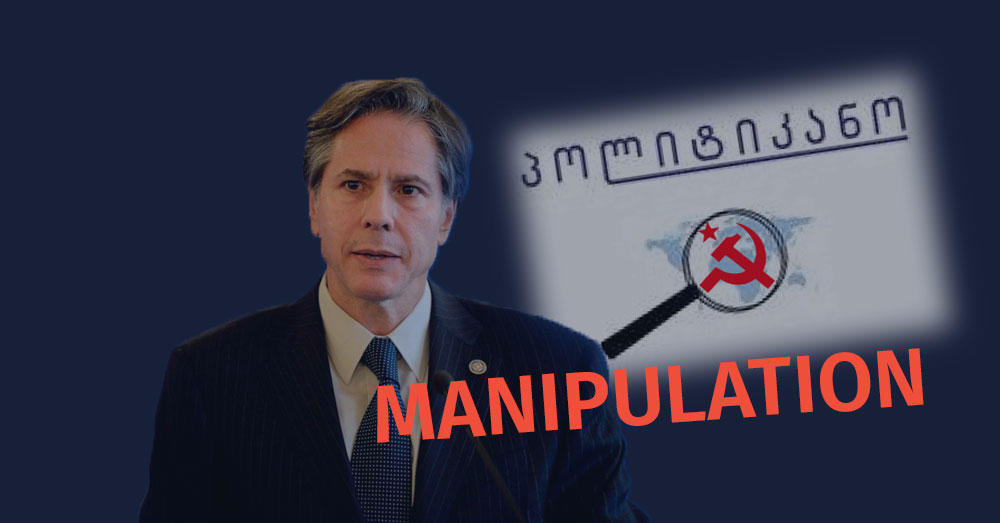 On January 10th, 2022, the Facebook page ‘Politicano’ published a post concerning the statement of the US Secretary of State, Anthony Blinken, about NATO and Russia. The post claimed that Blinken said NATO had never invaded anywhere against the will of the people. The next part of the post, however, concerns the Kosovo crisis, describing NATO’s intervention in Serbia and Russia’s occupation of Ukraine and Georgia as similar events. 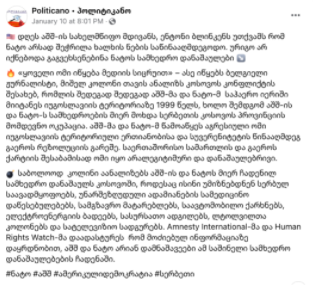 The post by ‘Politicano’ interprets the statement of the US Secretary of State Anthony Blinken manipulatively. In addition, due to vastly different contexts, it is also manipulative to present the Russian occupation of Ukraine and Georgia’s territories as identical to NATO’s intervention in Kosovo.

On January 5th, 2022, US Secretary of State Anthony Blinken issued a statement in response to Russian statements, which labelled NATO’s open-door policy in the post-Soviet space as a direct security threat. According to Blinken, it is not NATO but Russia that has occupied the territories of Ukraine and Georgia and deployed military forces to Moldova against the will of the people. 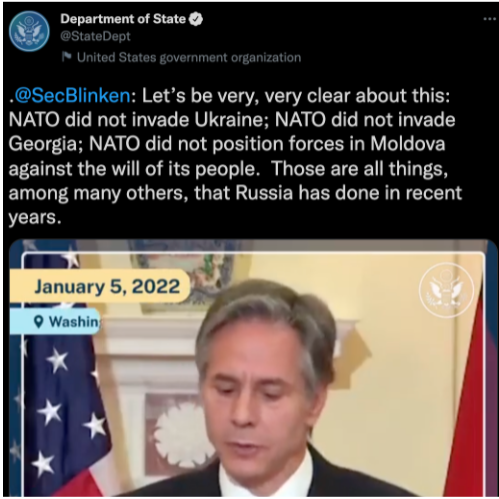 The post of ‘Politicano’ used Blinken’s statement manipulatively, as it omits the part that refers to Russia’s responsibility and does not mention either Ukraine, Georgia or Moldova. The post gives a general overview of NATO’s history, which the author of the post uses to raise the issue of Kosovo and equal the actions of Russia and NATO.

Although the conflicts in Kosovo and, for instance, Abkhazia, are somewhat similar, since they both emerged on ethnic grounds after the collapse of the Soviet Union, there are still fundamental differences between them.

First and foremost, it is essential to consider the preconditions of the conflicts and assess the legitimacy of the steps taken by the parties to the conflict:

The preconditions for self-determination were different on the one hand in Kosovo and on the other hand in Abkhazia and Crimea. In the case of Abkhazia, there was a representation of Abkhazians in local governmental bodies, ensuring equality. The legislative body of Abkhazia consisted of 65 seats. 28 of them were given to Abkhazians, 26 – to Georgians and 11 – to representatives of different nationalities. Along with the advantage of the Abkhazians, there was no threat on the agenda that the Abkhazians or their culture would be in danger from the side of Tbilisi. The situation in Crimea was similar. It is true that Russia convinced the international community that the Crimeans were threatened by official Kyiv, but in reality, this was an unfounded assumption and accusation.

In the case of Kosovo, Kosovar Albanians, unlike Abkhazians and Crimeans, were indeed facing the threat of ethnic cleansing from the Yugoslav Republic, in particular, President Slobodan Milosevic threatened their ethnic identity and left them no choice but to resort to militarily secession to ensure their right of self-determination. Before NATO intervened in the conflict, Milosevic took various steps against the Kosovar Albanians: 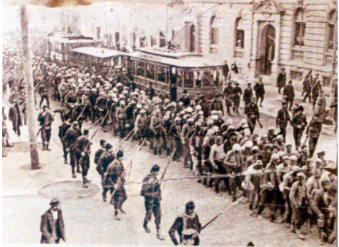 Deportation of Albanians from Belgrade

The intervention of the North Atlantic Treaty Organization in the conflict was intended to protect the Kosovar Albanians, stop their persecution and resolve the conflict. In the case of Russia, the goal was not to protect any particular ethnos but to occupy territories.

Not to mention, the methods for achieving independence, especially if we compare Abkhazia and Kosovo, were vastly different. In the case of Abkhazia, the aspiration for independence was achieved through the ethnic cleansing of another nation, in particular ethnic Georgians, and in the case of Kosovo, Kosovar Albanians themselves were victims of ethnic cleansing.

In addition, the developments were different in the cases of Kosovo and Crimea as well. In the case of Crimea, armed soldiers occupied the parliament building and forced the prime minister to resign. Despite the failure of the separatists in the next elections, Russia actively began to deploy its own army on the territory of Crimea.

If the Kosovar Albanians fought for actual independence, Crimean separatists sought to unite with Russia. In the Crimean referendum ballot, people met with the choice of independence as well as the choice of joining Russia. It should be noted that there was no third way in the referendum – to maintain the status quo.