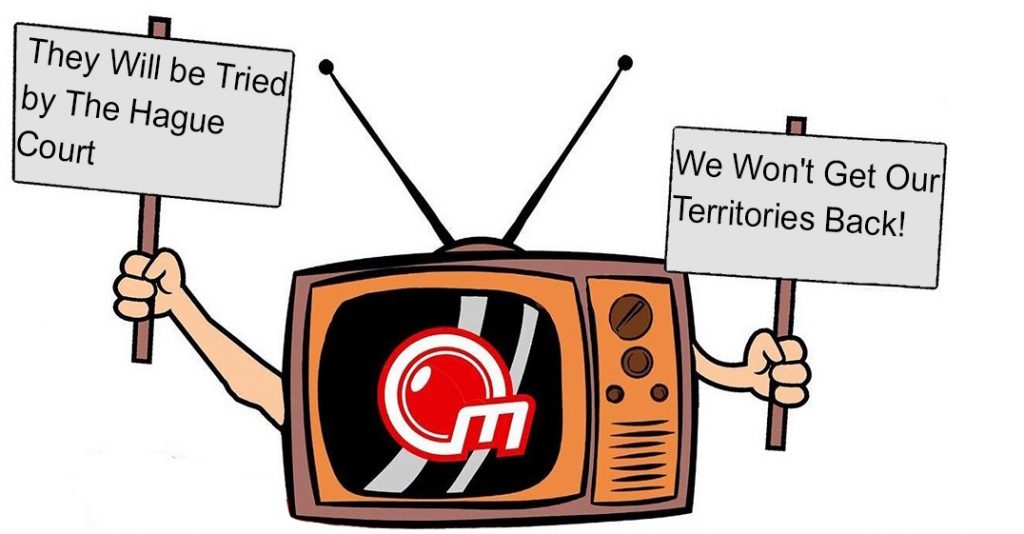 Gia Areshidze, host of Obieqtivi TV’s Gamis Studia (Night Studio) program, said on November 17, 2018 that Georgia should no longer be a member of the Rome Statute, because it prevents the country from restoring its territorial integrity. Areshidze claimed that if the Georgian government uses force to return Abkhazia and Samachablo, the Hague-based court will convict Georgian servicemen.

Gia Areshidze, host: “Georgia should not be a member of the Rome Statute. The Rome Statute has established this [Hague-based] International Criminal Court… It is just due to Saakashvili’s National Movement, which threatens people with the Hague-based court, that we are members of this undemocratically elected court… We should quit it and should no longer be its members, because if one day we need to use force for returning Samachablo – and I was saying it about 15 years ago – so, if we need to use force for returning Samachablo and Abkhazia, this court may convict our heroes, our generals and commanders-in-chief and this is largely due to them [the National Movement] that we face this threat.”

According to Article8.3 of the Rome Statute, prohibition of the war crimes does not “affect the responsibility of a Government to maintain or re-establish law and order in the State or to defend the unity and territorial integrity of the State, by all legitimate means”.

In addition, Article 8 of the Statute imposes punishment on a number of war crimes targeting peaceful population or civilian objects, such as willful killing of peaceful citizens, rape, taking of hostages, torture or inhuman treatment, employing asphyxiating, poisonous or other gases, pillaging, intentionally directing attacks against historic monuments, etc.

During its existence, the court has delivered guilty verdicts only against four servicemen. One of them was acquitted by the Appeals Chamber of the International Criminal Court (ICC) from the charges of war crimes. Two cases involved forced recruitment of juveniles and their involvement in cruel and violent actions. One more case was about the destruction of cultural heritage.

Recruitment of juveniles in Congo

Germain Katanga was the leader of one of the military units, who used children under the age of fifteen years during the attack on Bogoro village on 24 February 2003. The attackers killed about one hundred unprotected civilians, raped women and pillaged the village. The International Criminal Court found Katanga guilty of war crimes.

In a similar case, The Hague-based court found Thomas Lubanga Dyilo guilty of enlisting and conscripting children under the age of fifteen years into the army and using them to participate actively in hostilities throughout Congo in 2002-2003.

The case of Ahmad Al Faqi Al Mahdi involved the conflict unleashed in Mali in 2012, when several armed groups took control of Timbuktu and established a morality brigade under the leadership of Al Mahdi.  To obstruct the practices of Timbuktu population related to religious rituals, the brigade led by Al Mahdi destroyed about ten mosques and mausoleums recognized as cultural heritage monuments. The court found Al Mahdi guilty of committing war crimes.