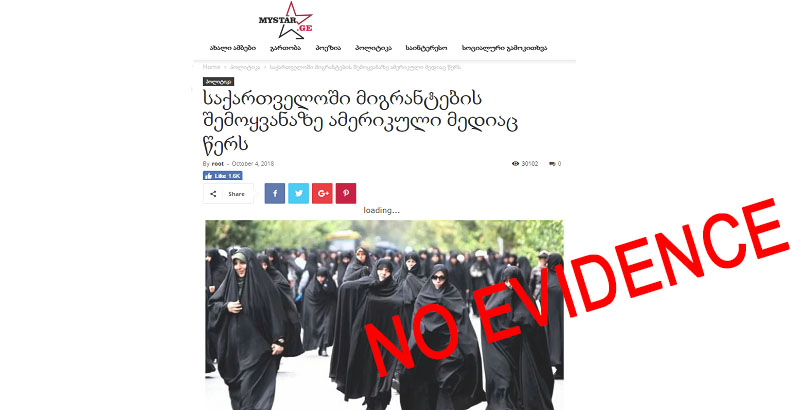 On October 4, mystar.ge released an article authored by Irakli Miladze, according to which it is planned to bring 500 000 migrants to Georgia before the end of 2020. Upon its publication, the article was reposted by ultra-nationalist websites, including Georgian Idea and National Force. The post shared with accompanying manipulative images quickly went viral in social networks. The article released by mystar.ge has no factual grounds, because the American source referred to in the headline is not specified. Thus, the author tries to legitimize disinformation by referring to American sources. No such reports can be searched in American media.

1. Information without a source

The Media Development Foundation got interested in which particular source Irakli Miladze was referring to when talking about Georgia’s obligation to bring migrants to the country. But he refused to specify the source, because actually no such reports can be searched in American media. It emphasizes the unreliability of this information.

Irakli Miladze links this issue to the visit of German Chancellor Angela Merkel to Georgia, claiming that crisis in Europe and large number of migrants underlined the need for bringing migrants to the country. Similar manipulative interpretations on Merkel’s visit are being disseminated for a long time. The remarks about the visit allegedly linked to Georgia’s obligation to accept migrants were made by Jondi Bagaturia, leader of the Georgian Troupe party, and political analyst Avigdor Eskin (see the material on the same topic).