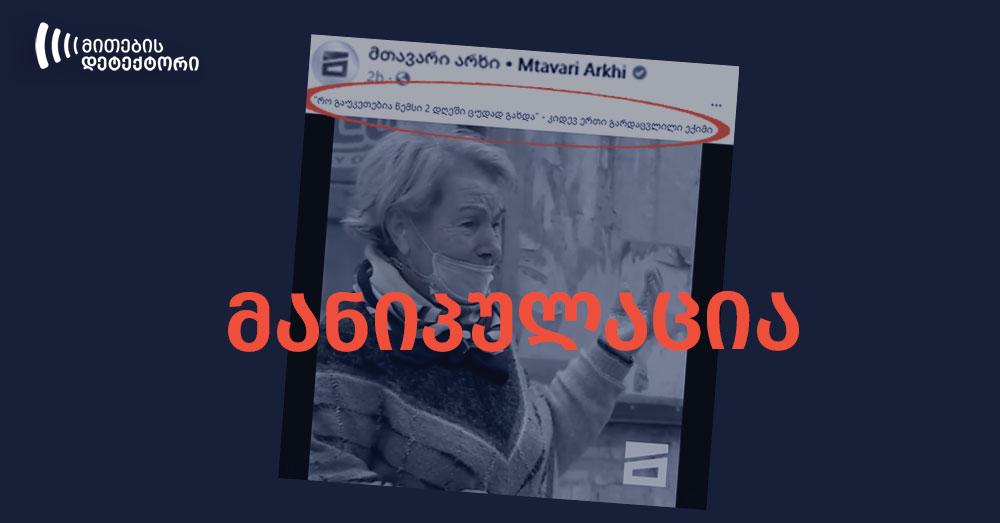 Update: After the material was marked as false on Facebook, Mtavari Arkhi TV edited the initial version.

March 31, Mtavari Arkhi TV aired in its program “Mtavari at 12 o’clock” a story about the death of a doctor from the Department of Pediatrics at Medcapital clinic. Part of the story was also published on the TV channel’s Facebook page in a form of a video with the following caption: “She felt unwell two days after being injected” – one more deceased doctor. 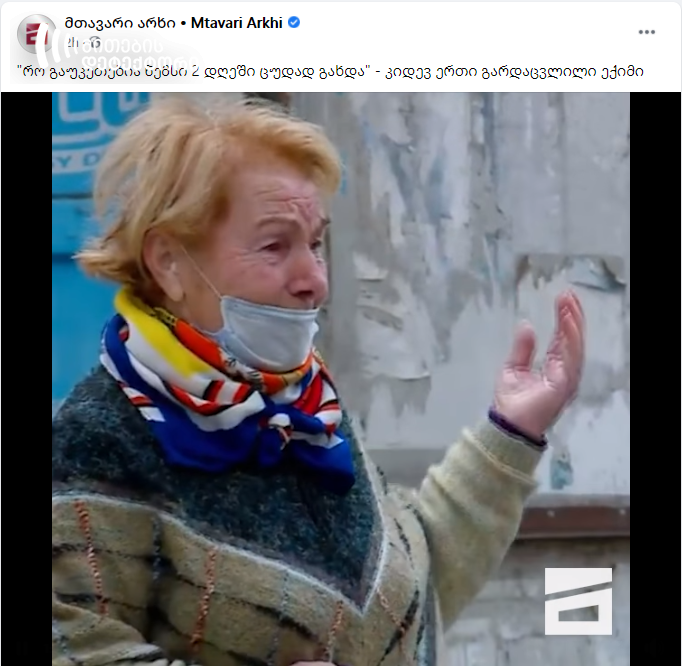 The caption of the video fragment posted on Facebook is manipulative and it quotes one of the respondents whose name is not identified. In the video, the respondent links the doctor’s death to the coronavirus vaccination without any evidence. It is noteworthy that a fragment of the TV story containing doctor’s comments about the reasons behind the patient’s death is not included in the Facebook version. As a whole, Facebook description and selected comments create a false context that vaccination has caused the death of another doctor.

The phrase included in the video caption belongs to the woman whose name is not identified in the material. She links the doctor’s death to receiving AstraZeneca COVID-19 vaccine without any evidence.

Unidentified respondent: “I was told by others that she worked there [at a hospital] and two days or more after she received an AstraZeneca vaccine injection, she was taken to hospital, where she stayed for some 10 or 5 days [before dying].”

The respondent confirms to the reporter that she received this information from the late doctor’s family.

The TV story, as well as the video fragment uploaded on Facebook, involves comments by Maia Abuladze, deputy director general of Medcapital. Abuladze notes that the late doctor experienced no side effects or complications from the vaccine.

Unlike the TV story, the Facebook video fragment does not contain telephone comments made by Guliko Chapidze, director of the Chapidze Emergency Cardiology Center, where she clarifies the reasons behind the doctor’s death. Guliko Chapidze notes that the patient was hospitalized on March 29 with pulmonary fibrosis, lung pathology and that she died from shortness of breath. Chapidze emphasizes that the death was not caused by vaccination and the patient was hospitalized two weeks after being vaccinated, adding that if vaccination had been the reason of her health aggravation, it would have happened immediately, within a couple of days. Thus, posting the unidentified respondent’s comments and neglecting Chapidze’s comments leaves a false impression that the death was caused by vaccination that is further intensified by an editorial text “One more deceased doctor.”

The State Regulation Agency is currently investigating the doctor’s death. Georgian Health Minister Ekaterine Tikaradze said that no direct links between vaccination and death have been identified so far.