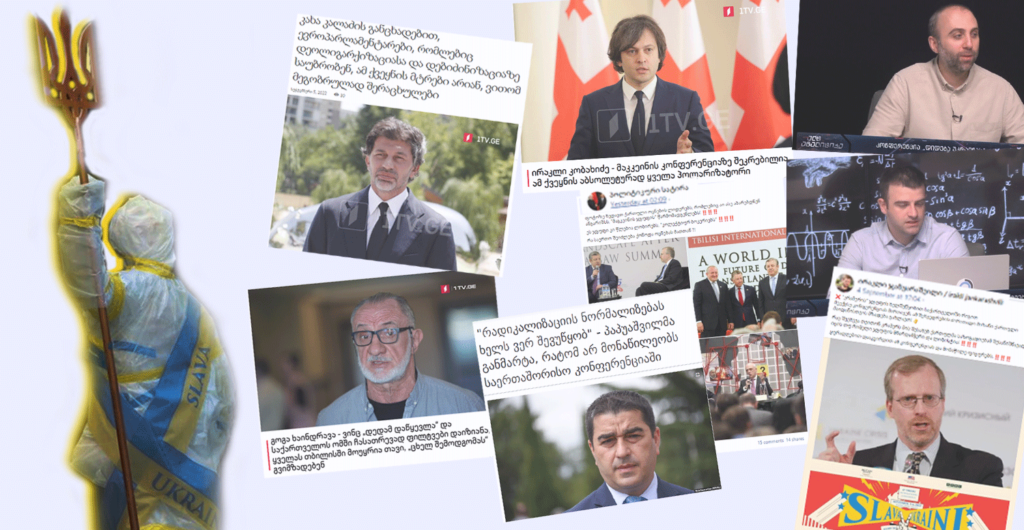 On September 5-6, Tbilisi hosted the sixth annual International Conference – “Glory to Ukraine!” The organizers and hosts of the event were the McCain Institute, George Bush Institute and the Economic Policy Research Center. The theme of this year’s conference was Ukraine, as the participants held discussions on the present and future of Ukraine and Georgia, prospects related to NATO and the European Union, and discussed the importance of democratic development of states. In addition, on September 4, the conference participants visited the village of Odze, which is located near the occupation line.

In parallel, a campaign to discredit the Tbilisi International Conference was revealed on the social network, involving both pro-government and anti-opposition Facebook pages and anti-liberal, pro-Kremlin accounts. On the one hand, these actors claimed that the conference participants were motivated by the desire to drag Georgia into the war with Russia, wanting to organize a coup in the country. On the other hand, they appealed on their alleged connection with the “United National Movement.”

Members of the ruling “Georgian Dream” party (Kakha Kaladze, Irakli Kobakhidze, Shalva Papuashvili) also responded to the Tbilisi conference, expressing critical opinions about the event and noting that the statements made by the participants served to deepen radicalization. In addition, according to Irakli Kobakhidze, Tbilisi International Conference brings together people who talk about revolution and coups. Film director Goga Khaindrava also accused the conference participants of trying to involve Georgia in the war, whose statement was sponsored by two Facebook pages (1,2) and covered by the “public broadcaster” in addition to the media with official pro-governmental editorial policies.

The monitoring carried out by the “Myth Detector” during September 4-7 has identified the following messages:

The following actors have been disseminating the above-mentioned messages:

On September 6, the representative of the ruling party, Irakli Kobakhidze, made a statement regarding the Tbilisi International Conference, noting that the conference is built around people who talk about revolution and coups. Film director Goga Khaindrava and the founder of the public movement “Ai-Ia” Vato Shakarishvili accused the participants of the conference of wanting to join the war and create unrest in the country. 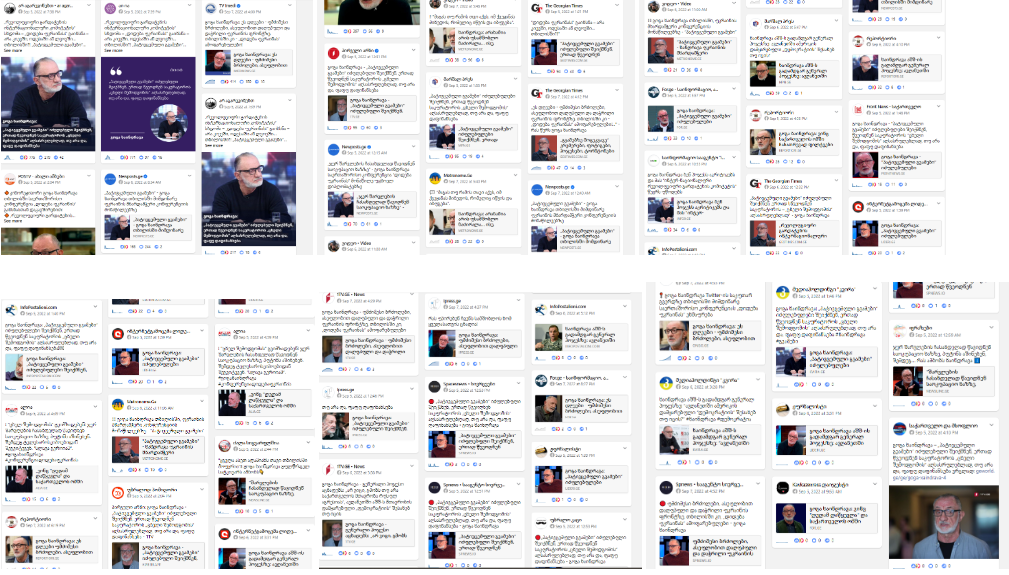 It should be noted that Goga Khaindrava’s statement was sponsored on the Facebook pages of “Ucnobi” [Georgian singer] and Vato Shakarashvili (Ar Agarevinebt, Ai Ia). 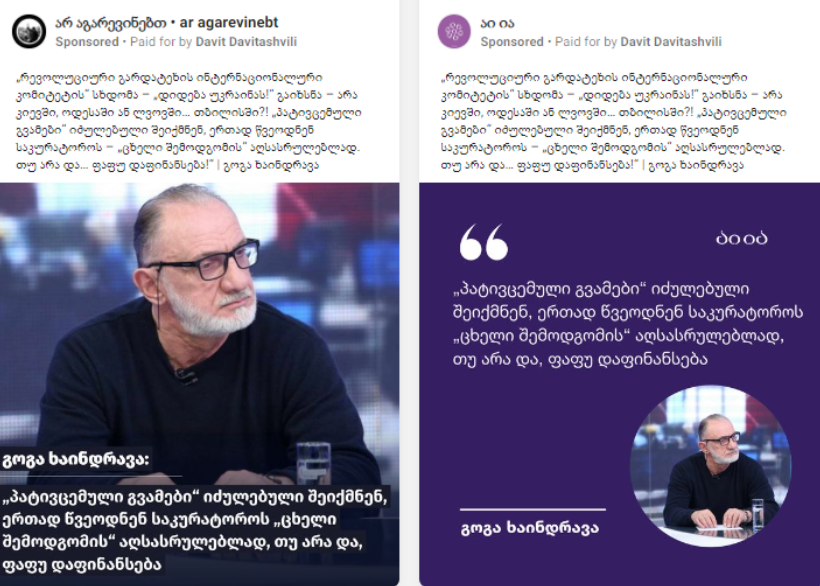 The message, according to which the participants in the conference wanted to bring chaos to Georgia and organize a second Maidan, was repeatedly broadcast on the “Alt-Info” channel as well. The hosts of the “Alt-Info” program, Marika Kublashvili and Matsatso Ghakhokidze, and the member of the “Conservative Movement” Merab Gigani, spoke about the “Maidanization of Georgia”.

Apart from not attending the Tbilisi International Conference, “Georgian Dream” members expressed critical opinions about the event and noted (Irakli Kobakhidze, Shalva Papuashvili) that the conference served to deepen radicalization, and their refusal to participate was an attempt to reduce polarization. In addition, Tbilisi Mayor Kakha Kaladze called the conference participants enemies of Georgia. Ermile Nemsadze, a former soldier and a member of the pro-Russian group “Georgian March”, disseminated a similar message.

To discredit the participants of the conference, Giorgi Kardava, the chairman of the “Conservative Movement” party, Marika Kublashvili, the host of one of the “Alt-Info” programs, and Jaba Khubua, the journalist of “Asaval-Dasavali”, have been disseminating the message that the participants of the Tbilisi International Conference are allies of the “National Movement” and are distinguished by their aggressiveness towards the government.

Giorgi Kardava, Conservative Movement: “This is David Kramer, who was one of the assistants of the State Department during the Saakashvili government, overseeing the direction of the Caucasus and Georgia. This person has very close contacts and ties with the “United National Movement”, Misha, of course; therefore, it is not surprising why this person is active.”

Marika Kublashvili, Host at “Alt-Info”: “The conference is attended by those European MEPs who were particularly aggressive towards the Georgian government and recently appeared as lobbyists for the UNM gang.”

Jaba Khubua, journalist (Asaval-Dasavali, September 5-11): “Instead of coming to Tbilisi to attend the international conference, Ian Kelly, David Kramer, Anna Fotyga, and Žygimantas Pavilionis should have been declared persona non grata by the Georgian state and should not be allowed to stay in the territory of Georgia because they constantly show disrespect towards the Georgian state and its sovereignty, rudely and cynically interfering in the internal affairs of Georgia and openly supporting the radical UNM-opposition with destructive-revanchist goals!”

Both the representatives of the ruling party (Irakli Kobakhidze) and pro-Kremlin actors (Shota Martinenko, Ilia Chachibaia, Marika Kublashvili) expressed critical opinions about Viola von Cramon, David Kramer and Laura Thornton. According to Irakli Kobakhidze, Viola von Cramon is hostile to the interests of Georgia when saying that the sanctions imposed on Ivanishvilisti are the result of the resolution. According to Shota Martinenko, Kramer does not care about the occupied territories of Georgia; According to Ilia Chachibaia, David Kramer and Laura Thornton are enemies of Georgia, who should be banned from entering the country.

A number of Facebook pages supporting the government and discrediting the opposition were involved in the campaign to discredit the Tbilisi International Conference and its participants. Among them, the Facebook page “Time for Truth” published screenshots of the information about the visit of the former US Assistant Secretary of State David Kramer and Anna Fotyga to Odzi and the meeting with opposition representatives with the following description: “Liberast landing to help Mishiko [Saakashvili]”. 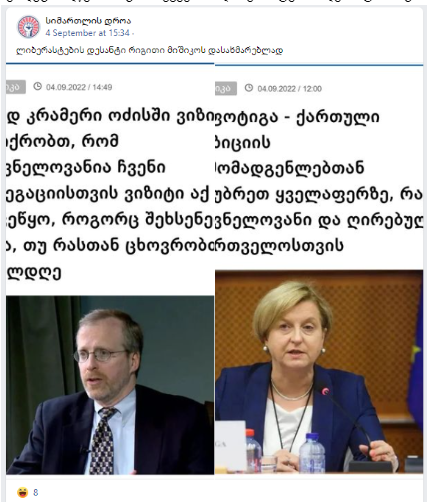 Notably, on September 5, the anti-positional Facebook page “Archive” published a video showing the confrontation between the leader of the “Alliance of Patriots”, Irma Inashvili, and the former assistant to the US Secretary of State, David Kramer. On the same day, the “Archive” video was shared by the pro-government and anti-opposition Facebook page “Sect”.

One of the participants of the discreditation campaign on Facebook was lawyer Irakli Zakareishvili, who published a number of posts about the conference. According to Zakareishvili, the Western partners directly call us to replace Bidzina Ivanishvili with Saakashvili, because they have paid money for it. Zakareishvili also published posts (1, 2 ) against individual participants, namely David Kramer and Kurt Walker.

Supporter of the “Alliance of Patriots” party and author of Tvalsazrisi.ge, Irakli Jankarashvili, dedicated several posts (1, 2, 3, 4) to the Tbilisi International Conference. According to Jankarashvili, the conferences, gatherings and anti-occupation speeches are part of the special operation planned by the American intelligence, the purpose of which is to convey the scenario of the Maidan in Georgia and to open a second front. Also, Jankarashvili wrote that the representatives of the conference are connected to the “United National Movement” and do not care about the fate of Georgia.

“Political Satire” – another Facebook page of the supporter of the Alliance of Patriots, Irakli Jankarashvili, stated in a post that the “McCain group” has been lobbying the “collective Bokerias” for years, which is why “Georgian Dream” has nothing to do with them. 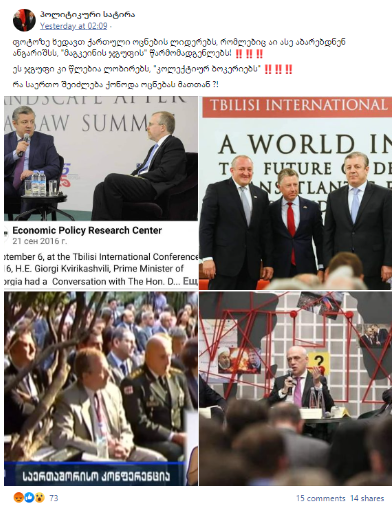 Irakli Jankarashvili also published a video (1, 2) on September 7, showing the feast of “Kramer and his group. According to Jankarashvili, these people do not care about Ukraine. Notably, POSTV-Analytics, a media outlet with a pro-governmental editorial policy, has distributed an identical video with the following caption: “Concerned with the fate of Ukraine, the participants of the conference ended the two-day gathering with feasting and fun.” 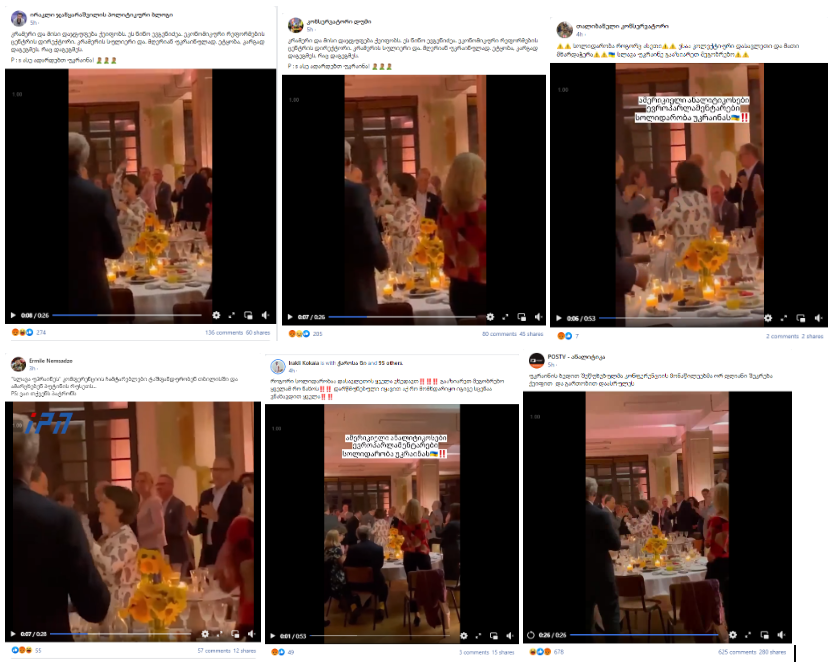