Manipulation by TVM.ge and Geworld about Children’s Rights, Soros and anti-occupation protest activists 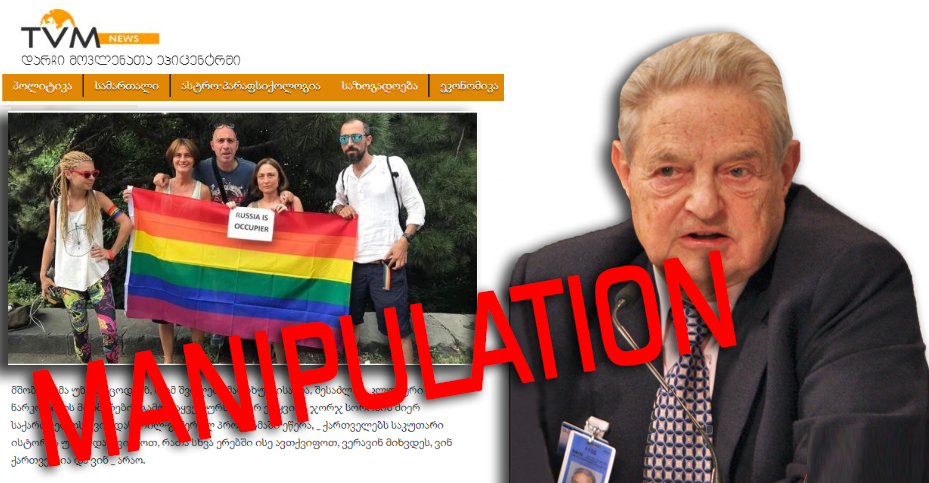 On August 15, 2019, online edition tvm.ge published “Georgia and World’s” article, which states about possible legalization of marijuana and club drugs and which was spread by a primary source in 2017. It is noted in the article, as if parents cannot reproach children in case of drug use, since non-governmental organizations will protect their rights. Moreover, at the end of publication, author speaks about negative influence of the West and claims, that George Soros’s program written for Georgia is directed against the Georgian nation.

Georgia and World: “Parents should know that they will not be able to reproach their children because of marihuana and, possibly, club drug use, since in that case so called human rights defender NGOs will intervene… For the information: It was written in the program by George Soros for Georgia, that Georgians should forget their history, in order to blend in with the other nations, so that nobody finds, who is Georgian and who is not.”

There is a manipulative photo in the article shared by tvm.ge, where June-August 2019 anti-occupation protest activists were shown on LGBT (rainbow) flag background, which has no connection with the content of the article and creates a false context. 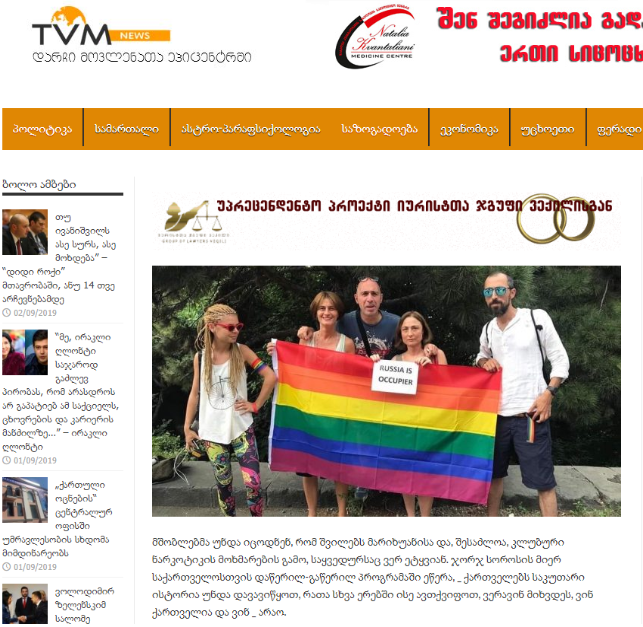 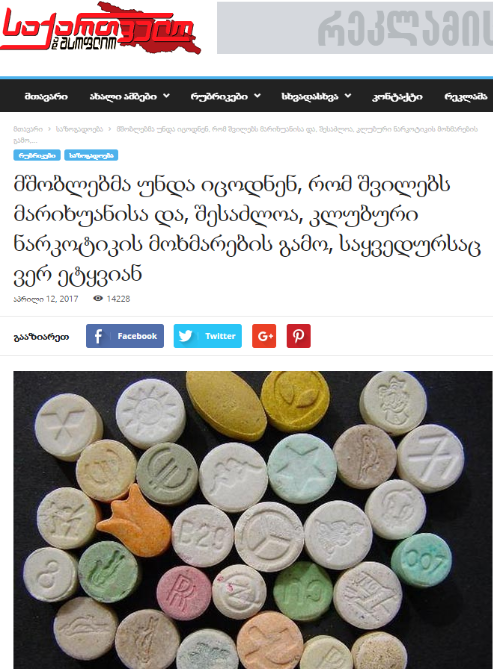 “Georgia and World’s” article published by tvm.ge, aims to settle an idea, as if protection of children’s rights bans parents  from child’s punishment and encourages drug use, which is absurd, since the United Nation’s “Convention on the Rights of the Child”, as well as Georgia’s “Code on the rights of the child” provide for the protection of children from drugs. The code prohibits only physical punishment of a child or humiliating treatment towards him

“Convention on the Rights of the Child”, adopted by United Nations in 1989, which Georgia joined in 1994, establishes minimum standards for the well-being of persons under the age of 18.

According to Article 33 of the Convention, states provide protection of children from illegal use of narcotic drugs.

Article 33: “Participant states take all necessary measures, including legislative, administrative and social measures, also the measures in education sphere, in order to protect children from the illegal use of narcotic drugs and psychotropic substances, as there are defined in relevant International Agreement, and to prevent the use of children in illegal production and selling of such substances.”

With regard to the draft law of the Parliament of Georgia, Article 62.1 of the “Code on the rights of the Child” provides for the protection of children from harmful effects. Noted norm prohibits selling of alcoholic, narcotic, psychotropic, toxic and other harmful substances to children.

Article 62.1: “Selling or delivering for free of alcoholic, narcotic, psychotropic, toxic and other intoxicating agents, alcohol-containing beverages, tobacco and nicotine-containing products or capsules to a child is prohibited.”

According to Article 49.2 of the “Code on the Rights of the Child“, the ban relates only to physical punishment of a child or humiliating treatment. Code does not refer to scolding a child by a parent.

Article 49.2: “Child’s physical punishment, torture or other brutal, humiliating or inhuman treatment or punishment within the family, at pre-school or general educational establishments, alternative care service, medical and/or psychiatric, penitentiary institution and any other place is prohibited. Noted action provides for liability in accordance with Georgia’s legislation.”

Conspiracies about George Soros’s aims has been spreading for years in Georgian and foreign media. “Myth Detector” has written about it before. Among the famous myth, there are narrations, as if Soros fights against the Georgian culture and Orthodox Church, while in reality, Soros’s Fund “Open Society – Georgia” has financed 365 projects in sphere of culture since 1994, including, development of directions, such as cultural heritage census and photo fixing, archeology, museums and contemporary art. At the same time, “Open Society – Georgia” has financed the projects, related to the restoration of churches and frescoes.

According to EU vs Disinfo, Kremlist conspiracies’ incomplete list “about almighty George Soros” looks as follows:

Archive link to the TVM.ge article.