Link between deaths in Italy and AstraZeneca vaccine was not confirmed 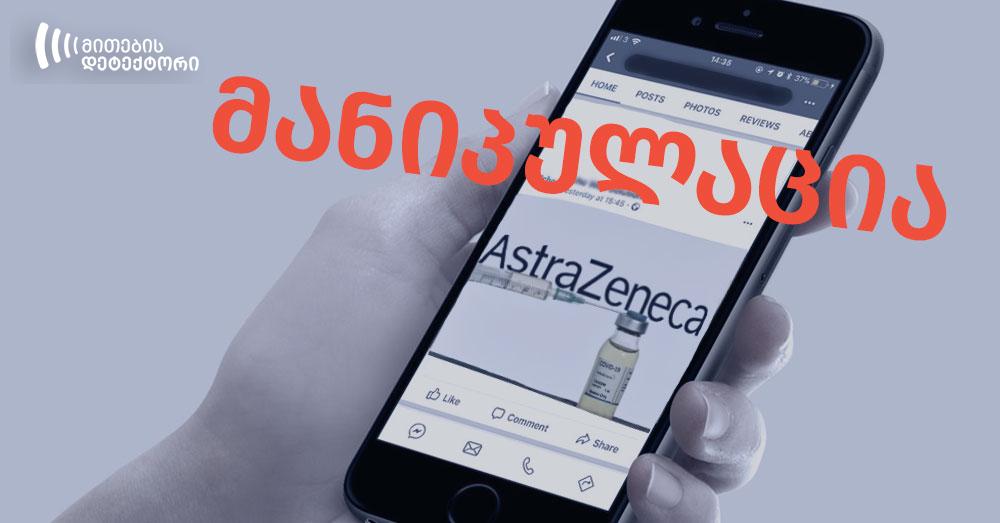 On March 12, 2021, Facebook user Mano Beridze published a post on Social Network stating AstraZenecas vaccination caused the death of 5 people, 3 of them were soldiers who died of thrombosis. In the comment section of the post, Mano Beridze specifies that deaths occurred in Sicily, Italy. 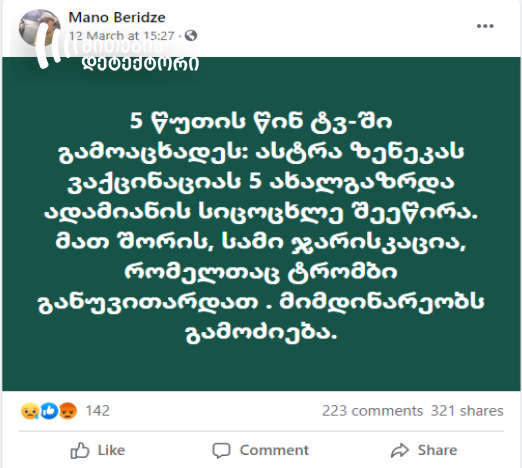 Courts in Sicily and Campania have launched the investigation about 5 death cases that occurred shortly after receiving the coronavirus vaccine in Italy. Out of 3 deceased patients in Sicily, the first one was soldier Giuseppe Maniscalco, aged 54, who died of a heart attack on February 20, 3 days after receiving the vaccine. Following his death, his family addressed the issue to the local court, however, an autopsy conducted on March 11 ruled out the link between the death and the vaccine. The second deceased patient, Sicilian soldier Stefano Paternò, aged 43, died of cardiac arrest 4 days after receiving the vaccine and his death is currently under investigation by Syracuse court. Paternò was autopsied on March 13, however, the prosecutor and experts couldn’t clearly confirm or deny the link between the vaccine and the death, therefore, an additional medical examination was scheduled for the next week. As for the police officer Davide Villa, aged 50, who died in the hospital on March 6, two weeks after receiving the vaccine, his case is still under investigation by the court. Villa is yet to be autopsied as of March 12 and apart from the temporal link, there is no other medical evidence confirming the link between vaccination and death.

The regulatory agency for medicine “Italian Medicines Agency” (AIFA) published a statement about the suspension of the AstraZeneca vaccine on March 11. According to the AIFA’s statement, following the reporting of some serious adverse events shortly after the vaccination, AIFA has decided, as a precaution to temporarily suspend the use of the vaccine and has started the investigation in close coordination with the European Medicines Agency (EMA). The statement also notes that “At present, no causal link has been established between the administration of the vaccine and these events”. Reuters cited an anonymous source and wrote that the aforesaid decision was related to the above-mentioned deaths in Sicily.

A day later, on March 15, AIFA stated that it had joined other European states in the extended suspension of the use of the AstraZeneca over the detected signs of blood clots pending European Medicines Agency (EMA) investigation results and rulings. According to spokespersons of the Health Ministry, the decision to suspend the use of the vaccine has been taken purely as a precautionary measure that will continue till the investigation on the link between vaccination and blood clots is concluded. On March 11, five European states suspended the AstraZeneca vaccination due to the same reason, whereas similar to Italy, Germany, France, and Spain also joined the decision on March 15. It’s worth mentioning that those states temporarily suspended the use of the AstraZeneca vaccine, a common occurrence in the medical field when it comes to the use of medication.

On March 12, the World Health Organization responded to European states suspending the AstraZeneca vaccine and stated that so far no link has been established between the vaccine and thromboembolism, however, the WHO advisory committee is keeping the eye on the vaccine safety. The European Medicines Agency (EMA), undergoing the investigation on the link between vaccine and blood clots, made a similar statement. According to EMA, over 5 million people in the EU received the AstraZeneca vaccine, while over 11 million people are vaccinated only in the UK. According to the EMA data, there had been 30 cases of “thromboembolic events” in Europe, which is a very low rate.

It’s noteworthy that on March 14, AstraZeneca published a data analysis of 17 million people on vaccine safety. According to AstraZeneca, across the  EU and UK, there have been 37 cases of various forms of blood clotting among those given the vaccine, which is a much lower rate than would be expected to occur in a general population and there’s no scientific evidence confirming the blood clots are an adverse event of AstraZeneca vaccine.