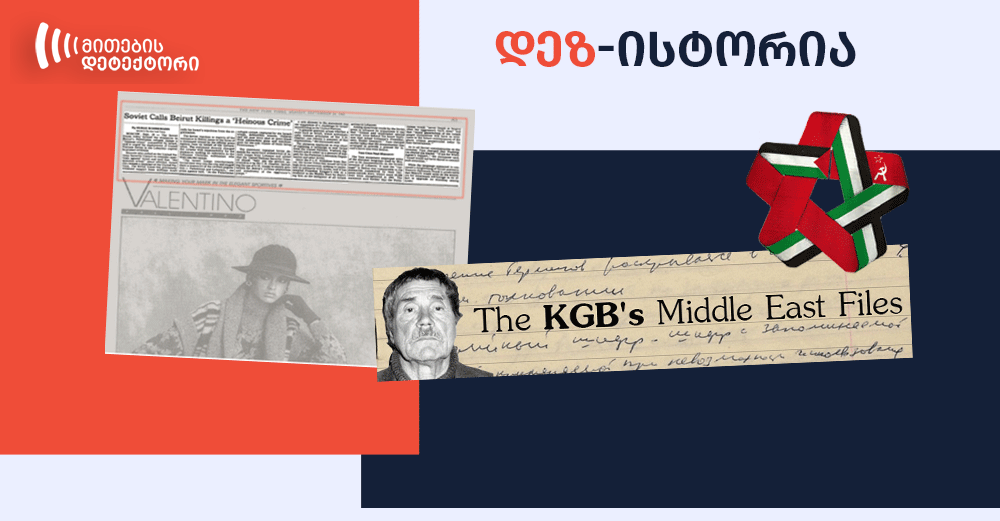 Since the day of its establishment, the Soviet Union had been using different methods in an attempt to gain influence on various countries and regions. In international politics, any country that would establish close ties with the USSR and its ideology, would further assist it in gaining more influence on international arena. Frequently, the Soviet Union managed to gain influence on specific territories through various propaganda methods and accurate messages (no matter whether it was a bordering state), thus posing challenges to the ties and forces of western states (USA, Great Britain).

By portraying itself as an anti-colonial actor, the Soviet Union was trying to gain influence on the Middle East and obtain support from Arab countries. It is clearly confirmed by USSR’s active involvement in the Israeli-Palestinian conflict. 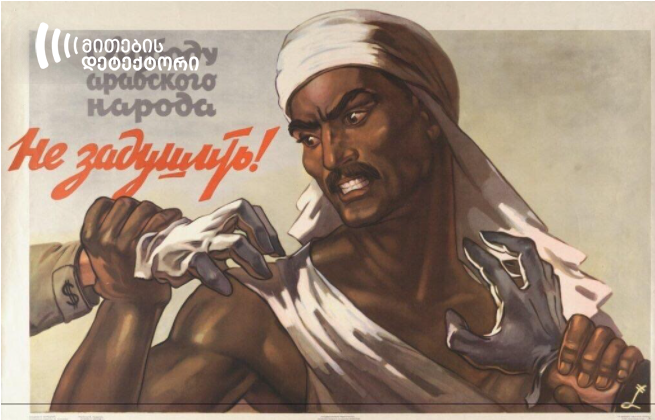 Freedom to Arab people. Do not suffocate!

The Soviet Union had shaped a pragmatic doctrine regarding the Middle East in the 1930s, but it failed to be implemented under Stalin. Its translation into practice occurred later.

It is noteworthy that since 1944, Stalin had been supporting the establishment of the State of Israel and in 1947, Soviet representative to the United Nations, Andrei Gromyko backed the partition of Palestine into Arab and Jewish states, because Stalin hoped that Israel would be established as a socialist state, become an ally of the Soviet bloc in the Middle East and reduce Britain’s influence there.

Despite minimum involvement in the relations with Arab states under Stalinism that was mainly limited to strengthening communist parties, the situation changed after Stalin’s death and the USSR launched more active policy in respect of Arab states of the Middle East. The strategy of dissolution of the Soviet Union launched in the Khrushchev period was maintained till the end.

It is noteworthy that the Soviet Union was achieving each of these goals through various propaganda methods.

Palestine Liberation Organization was formed in 1964 to centralize the leadership of various Palestinian groups that previously had operated as clandestine resistance movements. It came into prominence after the Six-Day War of June 1967, and engaged in a protracted guerrilla war against Israel.

It happened in a period when the Soviet Union had launched active interference in the Middle East issues; thus, the Israel-Palestine conflict could not have skipped its attention. The Soviet leaders understood well that the United States could not have good relations with Palestine Liberation Organization. Thus, through this organization, the USSR would weaken the U.S. positions and predispose the Arabs against America. 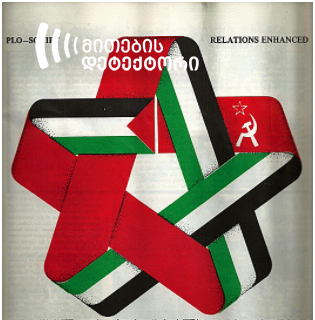 It is worth noting that Soviet propaganda was clearly demonstrated in the relations with this organization, because when Palestine liberators were committing terrorist acts, the Soviet media was either hiding this information or accusing pro-Israeli Arabs of violent attacks. Along with Israel, the Soviet media was constantly shifting blame to the United States, saying that “if not for Washington’s support, Israel would not have dared to commit such atrocities.”

Soviet media was frequently exaggerating the facts related to the Israeli-Palestinian confrontation to gain more support from the Arabs and generally the Arab world. Moreover, when covering the Beirut massacre, Soviet media did not mention the Lebanese Christian militiamen responsible for the incident but rather charged Israel with responsibility for the massacre.

The article released by The New York Times in 1982 is about the massacre that took place in Beirut’s Palestinian refugee camps:

“The Soviet reaction to reports of the massacre in Beirut came in the form of a statement issued by the official press agency Tass on behalf of the Government. The statement directly charged the Israelis with responsibility for the massacre, making no reference to the Lebanese Christian militiamen who went into the camps.” 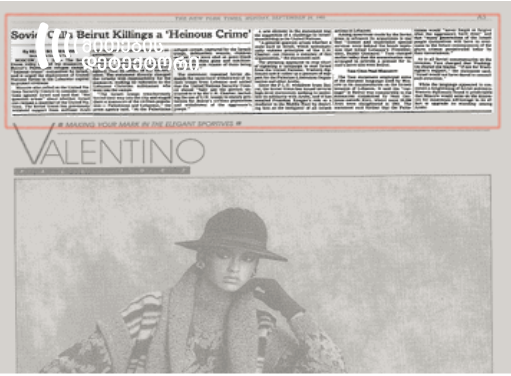 The New York Times about the Beirut massacre (1982)

Along with the media, the USSS was trying to achieve its goals through more sophisticated methods. Soviet archivist and official, Vasili Mitrokhin unveiled top secret documents about Soviet agents of the 1990s as well as secret information covering the issues of Israeli-Palestinian confrontation. 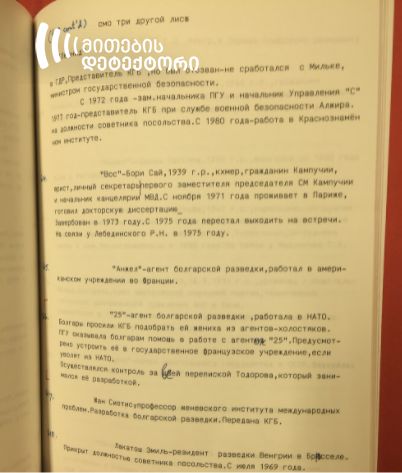 Fragments from the Mitrokhin archive

The files can be classified according to what the purpose of a specific Soviet action was.

Before the relations between the members of the Warsaw Pact and Israel aggravated (prior to the Six Day Israeli-Palestinian war) and the Soviet Union had to seek other ways for getting information, it was actively using foreign diplomats’ resource to obtain necessary information and achieve its goals.

This method helped the Soviet Union to obtain information in Israel not only about this country, but other countries as well. Frequently, the recruited diplomats held top positions in a particular country. Those persons had their codenames assigned by the Soviet Union to them.

As shown in the table above, along with ambassadors and clerics, the Soviet Union was also recruiting journalists who had access to a lot of interesting information. According to the Mitrokhin Archive, the Soviet Union was frequently trying to recruit people with strange professions. For example, one of such recruited persons worked in a dry-cleaning business. According to some allegations, Moscow hoped to find secret documents in the pockets of the suits delivered to him for cleaning.

“Illegals” – this is how Soviet spies trained and planted by the Soviet Union abroad were called. These people were undergoing special training in the Soviet Union before being planted abroad under false or assumed identities to perform their missions. Soviet agents were trained to talk, think and act, even subconsciously, like the regular American, Brit, German or Frenchman they would become from the moment they touched down on foreign soil.

At the end of their training, the so called “illegals” underwent a special ceremony, where each agent took an oath, saying the following words:

“As a worthy son of the homeland, I would rather perish than betray the secrets entrusted to me… With every heartbeat, with every day that passes, I swear to serve the Party, the Homeland and the Soviet people.”

As for Israel, the Soviet Union decided to launch the intelligence offensive created by a special operation codenamed “TN,” planting “illegals” on short trips to Israel. The Soviet Union’s failure to obtain information through the Soviet Embassy, Russian Church in Jerusalem and various structures amid the aggravated relations (following the six-day war) prompted the USSR to take this measure, especially as the above mentioned routes were sometimes considered too slow. .

According to the Mitrokhin Archive, Andropov decided to allot five “illegals” (codenamed “Karsky,” “Patriya,” “Run,” “Yoris” and “Kravchenko”) that is a huge number for such operations. They arrived in Israel to further establish their cover story.

It is worth noting that these persons posed as citizens of Canada, Spain, Mexico and Finland.

Along with recruits and illegals, the Soviet Union was actively cooperating with Palestinian terrorist organizations that is confirmed by the Mitrokhin Archive documents.

Each of such organization had its codename in Russian:

Yasser Arafat, one of the leaders of the Palestine Liberation Organization, also had a codename. 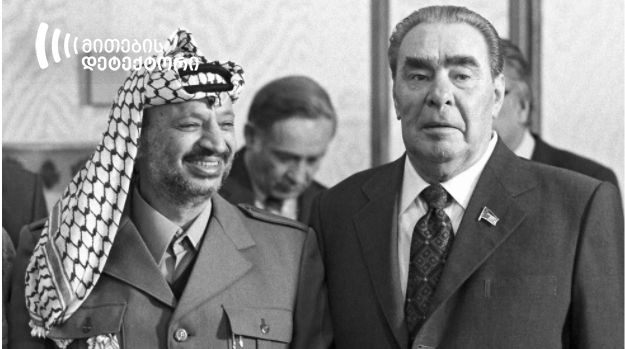 According to some allegations, the Soviet Union backed one of the famous terrorists, Wadi Haddad (codename “Nationalist”). Such allegations were confirmed by Andropov’s report sent to Brezhnev, reading:

“Since 1968, KGB has a secret employment contract with Wadi Haddad, member of the political bureau of the Popular Front for the Liberation of Palestine (PFLP), head of PFLP’s external operations department.” 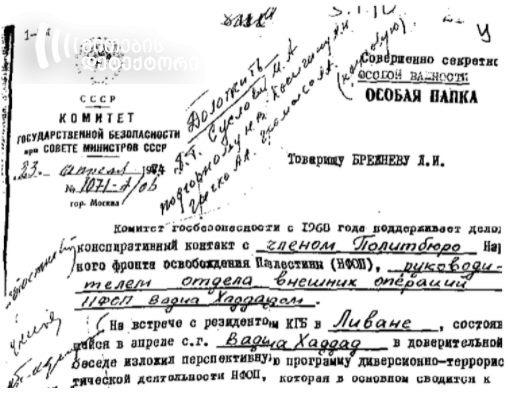