Is the Canadian Government Planning to Regulate the Content Published on the Internet? 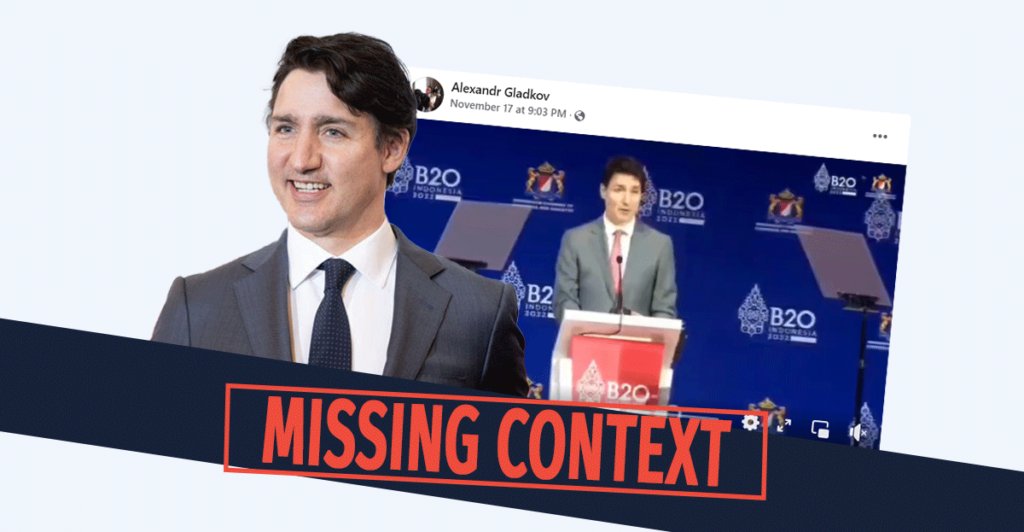 On November 16-17th, Georgian (1, 2, 3, 4) and Russian (1,2,3) Facebook users have been disseminating a fragment of Canadian Prime Minister Justin Trudeau’s speech at the B20 Summit. According to the description, Trudeau announced that only government-approved content would be allowed on the Internet and that artificial intelligence would start monitoring the citizens.” 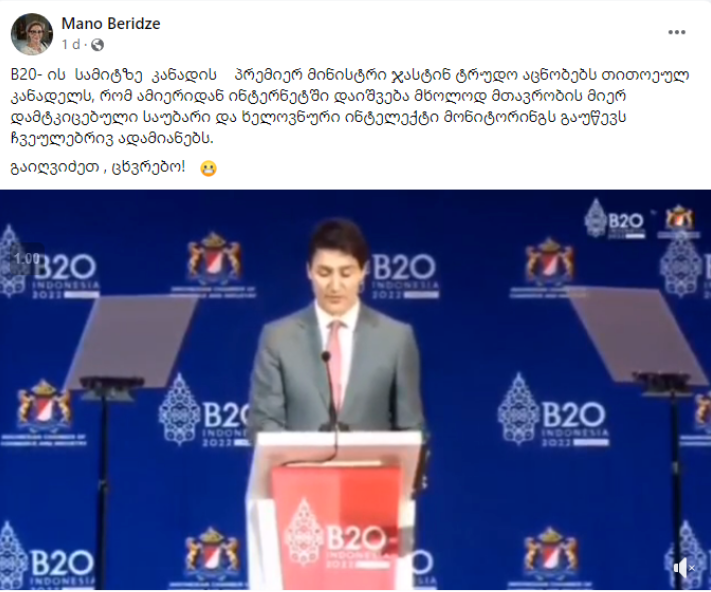 The claim that the government of Canada will start regulating the content on the Internet is misleading. In his speech, Justin Trudeau referred to Bill C-11, which plans to regulate the content of large broadcasting organizations, with the aim of strengthening small local companies, protecting consumer safety and promoting Canadian-made content. According to the Minister of Canadian Heritage, the law does not apply to Internet users.

This statement was made by Justin Trudeau on November 14th, 2022, at the B20 summit held in Indonesia. In his speech, the Prime Minister talked about the issues such as: increased Canadian investments in Asian countries; problems caused by the pandemic; the war initiated by Russia in Ukraine; the importance of new technologies in business transformation, access to the global economy from all parts of the world, and more.

When talking about technologies, Trudeau stressed the following: “we have to make sure that smaller businesses and economies can fully access the global Marketplace. If we want to level the playing field, we must cooperate through the sharing of information and best practices. We must identify and develop common standards. For example, Canada is leading on the responsible development and use of artificial intelligence. We are also undertaking major legislative reforms that will strengthen privacy protections for Canadians, including specific provisions to protect children. See while always ensuring and defending free speech we must make it clear that it cannot be okay to bully and attack people online. Governments and especially big technology companies need to safeguard people’s data and privacy and address online harassment and violence to ensure trust in technology.”

Bill C-11 (on the amendments to the Broadcasting Act) was introduced to Parliament on February 2nd, 2022, following a letter prepared by the Prime Minister of Canada on the subject in December 2021. In the letter, among other things, Trudeau calls on the Minister of Canadian Heritage to reform the “Broadcasting Act” to combat harmful content spread on the Internet, protect consumer information, and involve large international broadcasting companies in the promotion of Canadian stories and music. The emphasis is on bridging the gap between the resources available to large technology organizations and smaller local companies. It should be noted that a similar bill named C-10 was also introduced in November 2020, but it failed to be approved.

Bill C-11 is currently being considered by the Senate of Canada’s Transport and Communications Committee. According to the bill, regulation will be carried out by the Canadian Radio-television and Telecommunications Commission. Their primary objective will be to promote Canadian product advertising on broadcast services and to protect confidential information. The Minister of Heritage, Pablo Rodríguez, when introducing C11, stressed that the law would only affect online broadcasting companies. During the debate in the Parliament, he specified that there will be no control of content shared/produced by users (including YouTubers, influencers, etc.), which is also mentioned in the first paragraph of Article 4 of the draft law. 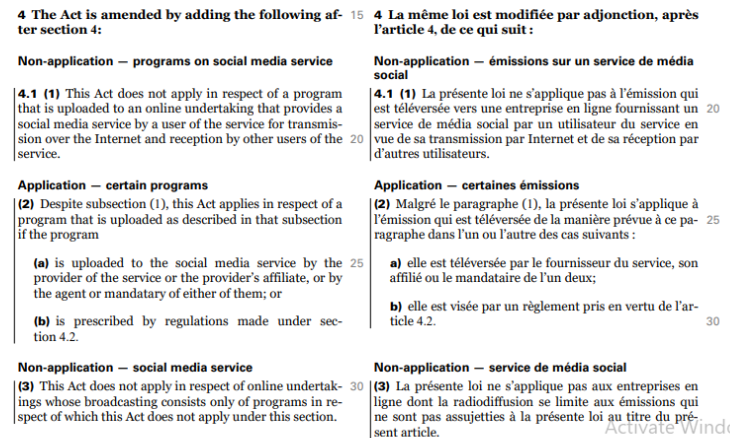 As demonstrated above, the first paragraph of the fourth article of the Broadcasting Act draft sates that the mentioned act does not apply to the content uploaded by users of social networks, which are intended for other users. In the second sub-section, it is further clarified that the Act regulates the cases where the program is uploaded by the provider, its affiliated agency or any agency with their mandate.

Despite this, the draft law is often criticized because of the second paragraph and sub-paragraphs of the fourth article, which in turn, in the form of exceptions, provide the possibility to control the content produced by certain types of users of social networks (for example, YouTubers). The Chairman of the Regulatory Commission himself stated in the Senate on May 18th (17:42:40) that according to the existing laws, technically the Commission still has the right to regulate individual content, and if necessary (18:01:55) the C-11 Act also gives the Commission the right to regulate certain content produced by users. However, they are not going to use the mandate, because the most important thing for them is the trust of the population, and the Commission has never interfered with individual content during its existence.