Is Mandatory Seasonal Influenza Vaccination Planned and Who Links it to COVID-19? 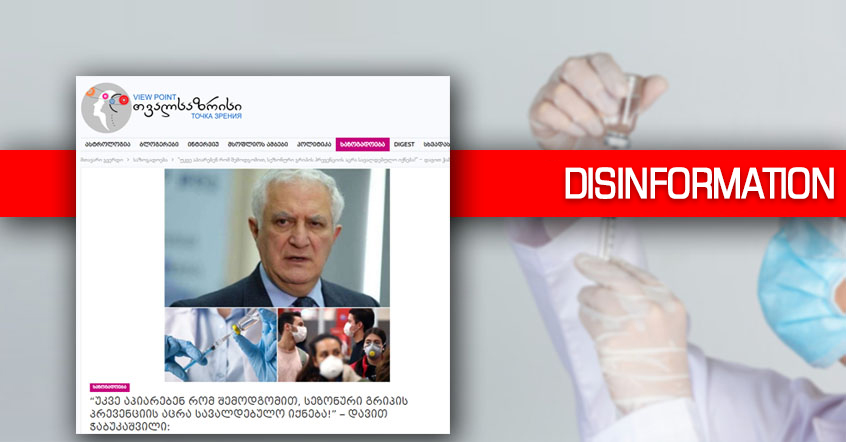 On July 9, an online edition tvalsazrisi.ge published a Facebook post by Davit Chabukashvili, member of Free Georgia party’s political council, where he states that the government cheats the population and causes intentional harm to public health. According to Davit Chabukashvili, various statistical data confirm that COVID-19 mortality rate is significantly lower than the fatalities caused by other viruses. He, however, provides no data to prove his own words. In addition, Chabukashvili noted that the government has already stockpiled seasonal influenza vaccines and vaccination will be mandatory in autumn. Chabukashvili’s post has 261 shares as of now 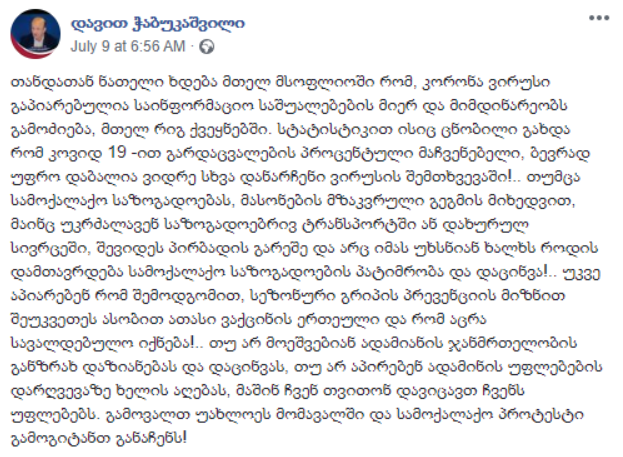 Davit Chabukashvili’s Facebook post that was also published by tvalsazrisi.ge contains disinformation. In particular, it is a lie that mandatory seasonal influenza vaccination is planned in the country. The Georgian National Disease Control Center has not confirmed the information to Myth Detector. Furthermore, the claims as if COVID-19 mortality rates are significantly lower than the fatalities caused by other viruses are not true either. Myth Detector has already written earlier about COVID-19 lethality and its comparison to other diseases.

To verify the information, Myth Detector reached out to the National Center for Disease Control and Public Health. The latter denied the information, noting that the government stockpiles seasonal influenza vaccines every year and neither the year 2020 will be an exception. It also added that vaccination will not be mandatory; population will have to pay for vaccines; it is a voluntary program and will remain as such in 2020 as well.

First of all, it should be noted that COVID-19 pandemic is not yet over. Therefore, it is difficult to talk about exact death rates. Furthermore, the coronavirus fatality rates vary widely between countries and age – from 0.2% in Germany to 7.7% in Italy. As of July 13, fatality rate is 4.5% on average. In his post, Davit Chabukashvili does not specify the fatality of which viruses he compares to COVID-19. Myth Detector has already verified some widely circulating myths as if COVID-19 is less dangerous than seasonal influenza.

In April 2020, the author of the article published by Georgia and World claimed that H1N1 (swine flu) epidemic had much severe consequences than COVID-19. In June, Facebook page “საქართველო უპირველეს ყოვლისა” (Georgia First of All) claimed that the novel coronavirus had lower fatality rate than seasonal influenza. In fact, during the 2009-2010 pandemic, swine flu mortality rate was 0.02%, while an influenza virus, which emerges as a seasonal influenza has significantly lower fatality – 0.1%.

As already mentioned above, in his post, Davit Chabukashvili does not refer to any official statistical data or official statement about vaccination. However, the analysis of comments added to this post led us to one of likely sources – Tinatin Topuria, a Georgian homeopath, who voiced such narratives during Ilioni TV program “Dialogue.”

During the program referred to by Davit Chabukashvili, Tinatin Topuria spread reports about coronavirus vaccination. The Myth Detector has already verified the disinformation spread by Topuria regarding vaccination. See the material:

As for travsazrisi.ge, according to registrator.ge, it was registered on April 30, 2019 and its Facebook page was created later on May 2. The online media outlet uses both platforms for covering local and international news and periodically spreads fake or manipulative news.