Is Liz Truss Actually a Suspect in the Nord Stream Explosion? 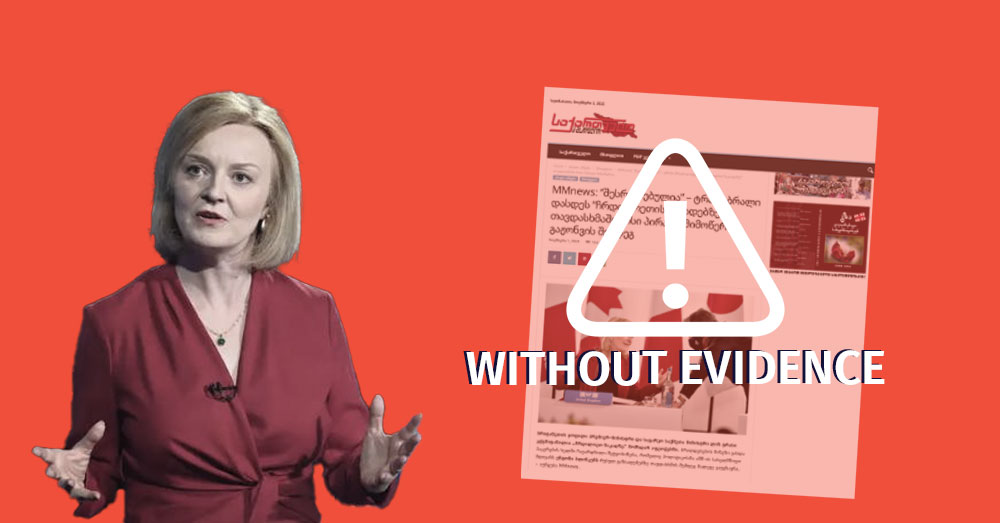 On November 1st, 2022, Pro-Kremlin media outlet Georgia and World shared claims that former British Prime Minister, Liz Truss, is a suspect in the 26 September Nord Stream explosion. According to the article, a phone hack revealed Truss sent a text to U.S. Secretary of State Anthony Blinken a few minutes before the explosion saying “It’s done.”

Georgian Facebook accounts  have voiced similar information, claiming that the true reason behind Truss’ resignation has been revealed.

Because of its relevance to Russia, the issue was also discussed by Dmitry Vasilets, the leader of the pro-Russian “Homeland” party, which is banned in Ukraine. The video was shared by a number of Russian-speaking users (1,2,3). Notably, several social media users (1,2) linked the resignation of Truss to the the alleged connection of the UK to the North Stream explosions.

The information about the possible correspondence between Liz Truss and Anthony Blinken and its connection with the Nord Stream was also actively covered by the Russian media (1,2,3,4,5), however, Kremlin media outlets note that the claims have not been officially confirmed, and the primary source of the information is the founder of the file sharing platform Megaupload, Kim Dotcom. Nevertheless, Russian high-ranking officials responded to the unconfirmed information. Russian Foreign Ministry spokeswoman Maria Zakharova has demanded an official response from Britain on whether Liz Truss sent Anthony Blinken the said message. According to Nikolai Patrushev, Secretary of the Security Council of the Russian Federation, the message sent by Truss to Blinken confirms London’s connection to the explosion of the Nord Stream pipeline.

The claim that former British Prime Minister Liz Truss’ phone was hacked comes from an unconfirmed media report by the British tabloid the Daily Mail. According to this report, Truss’ phone was “hacked by agents suspected of working for the Kremlin,” with up to a year’s worth of messages downloaded. These messages are thought to include private messages between Truss and international foreign ministers, including messages about the war in Ukraine, as well as criticisms Truss made of former British Prime Minister Boris Johnson. The paper claims the hack took place when Truss was still foreign minister and that it was discovered during her campaign for Conservative Party leadership over the summer. According to the report, Johnson knew about the hack, but suppressed the details.

UK opposition parties are now calling for a thorough investigation into the reported claims. However, the demand concerns the investigation of an incident that happened in Summer 2022, while the pipeline explosions occured in September.

The claim that former British Prime Minister Liz Truss sent a message to U.S. Secretary of State Anthony Blinken related to the Nord Stream pipeline comes from a tweet by Kim Dotcom. According to his post, Truss sent a message saying “It’s done” a minute after the pipeline blew up and before anybody else knew. No sources were listed in his tweet. In a follow-up tweet, Dotcom stated he did not have access to the primary source, but rather saw intel chatter and the request of the Russian foreign ministry’s spokeswoman Maria Zakharova that the UK explain Truss’ supposed text. 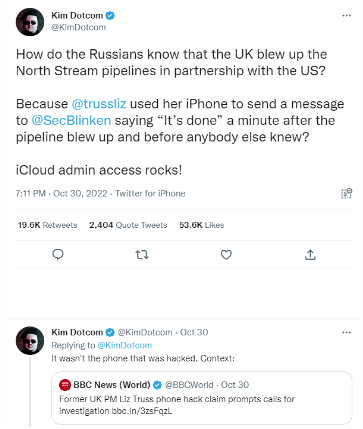 Kim Dotcom has a history of posting misleading or false tweets, and has been fact-checked before (1, 2). Founder of the file-sharing website Megaupload, Dotcom is currently fighting extradition to the U.S. where he faces charges of copyright infringement, money laundering, and racketeering.