Is Hitler’s “Mein Kampf”, with the Annotation Glorifying Hitler, Sold in Georgia? 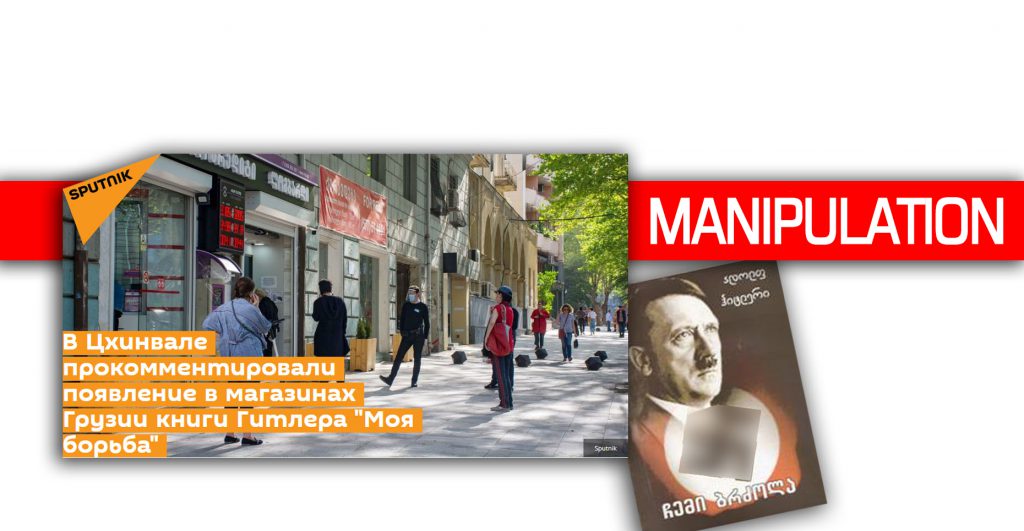 On May 30, Sputnik-Ossetia published an article titled “Comments in Tskhinvali on Adolf Hitler’s ‘Mein Kampf’ Appearing in Georgian Stores”. The article mentions that the propaganda of radical ideas and racial theories is on the rise, after Hitler’s “Mein Kampf” got published in Georgia in 2020. According to the KGB of the so-called South Ossetia, the book is sold in every bookstore in Georgia and enjoys popularity and high demand. They also added that the book’s annotation reads “Reading the Book by the Fascist State’s Führer Will Dispel Lies, Manufactured by the Soviet Literature About Him”.

According to the article, the publication of the main Nazi criminal’s book did not coincide with the 75-year-anniversary of the Victory in the Great Patriotic War by accident. The KGB also underlined the symbolism, associated with publishing Hitler’s “Mein Kampf” on the 100-year-anniversary of the so-called “Genocide of the South Ossetians”. “This fact, once again, makes it evident that the Georgian regime, instead of taking the responsibility for the crimes against humanity in 1920, once again expresses interest in radical ideas and connects the criminal and aggressive deeds to the South Ossetia” – claimed the special service.

The only bookstore where “Mein Kampf” is sold with the aforementioned annotation, is Laterna. Myth Detector contacted Laterna for additional information and was told that the book is not newly published. As of July 6, Laterna’s online store removed the given annotation from the book.

The claim that the book was intentionally published on the 75-year-anniversary of the Victory in the Great Patriotic War and the 100-year-anniversary of the “Genocide of the South Ossetians”, is false. In fact, a Georgian translation of an adapted, shortened version of the book has been available since 1991. Moreover, Adolf Hitler’s “Mein Kampf” has not been published by any large contemporary Georgian publisher. Myth Detector contacted the following publishers: Diogene, Artanuji, Intellect, Bakur Sulakauri Publishing, Books in Batumi. All of them denied publishing the aforementioned book.

On the Internet, this version of Adolf Hitler’s book is only available on some webpages, but only a shortened online electronic version is available. The book comes with the following annotation: “Adolf Hitler wrote ‘My Struggle’ (‘Mein Kampf’) when he was in jail in the beginning of 1920s. The book reflects his political views, worldview, biography, and the career path. The given translation is a shortened version of the book, published in 1935.” The webpage also includes the table of contents of the book.

It is noteworthy that these electronic versions are a Georgian version of a shortened, adapted version of the original book, and this translation is way older.

Such old translations are also to be found on the webpage of the electronic library of the Sokhumi University, where 1995 is indicated as the year of publication of the book. The book comes with the following annotation in the electronic library: “Adolf Hitler wrote ‘My Struggle’ (‘Mein Kampf’) in prison, in the beginning of 1920s, when he was young. The book reflects his political views, worldview, biography, and the career path. The given translation is a shortened version of the book, published in 1935.”

A print version of a Georgian translation of a shortened version, published in Shanghai in 1935, is available in the library of the Ilia State University. It was published in 1991, but the publisher is not indicated in the book.

This book is not quite popular, as Laterna explained to us.

Hitler’s “Mein Kampf” was not published in Georgia in 2020 and the available versions of the book provide a possibility to read a historical source, not to glorify Hitler. The accusations from Sputnik-Ossetia and the KGB of the so-called South Ossetia that the book, published in 1991, increases the support of Nazism among the population of Georgia, are baseless.