India and Batumi or the USA, Russia, Venezuela, Israel, and Brazil? 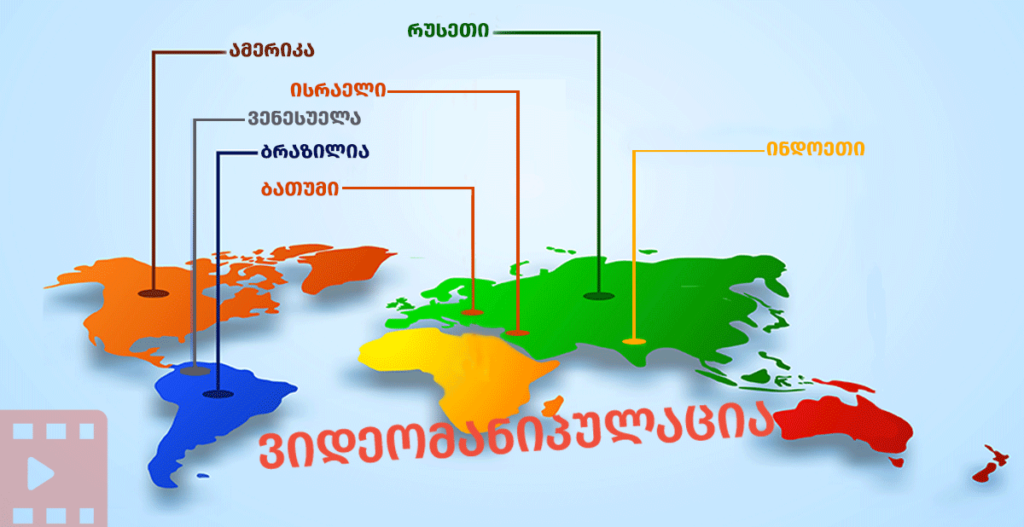 On April 24, a Facebook user Tamara Ottaviani published a video collage showing footage of hospitals, doctors, and deceased people. Facebook users’ comments show that the footage was understood as an evidence that COVID-19 and its associated events are fake and staged.

Lasha Menteshashvili published a similar post on April 26 too. The post comes with a video which was also included in the above-mentioned video collage. The video shows body bags, while the author of the post claimed that the “play” was staged in India this time and the crematoriums in the streets are a part of this process too.

Levan Navi, another Facebook user, published the identical video on April 17 and claimed that the footage showed the beginning of the third wave in Batumi. 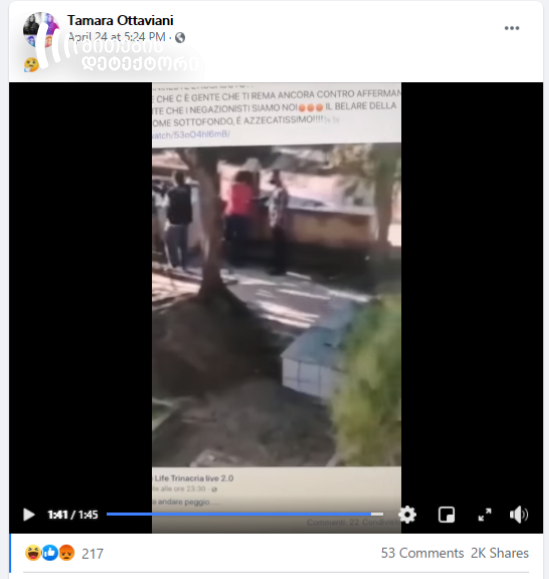 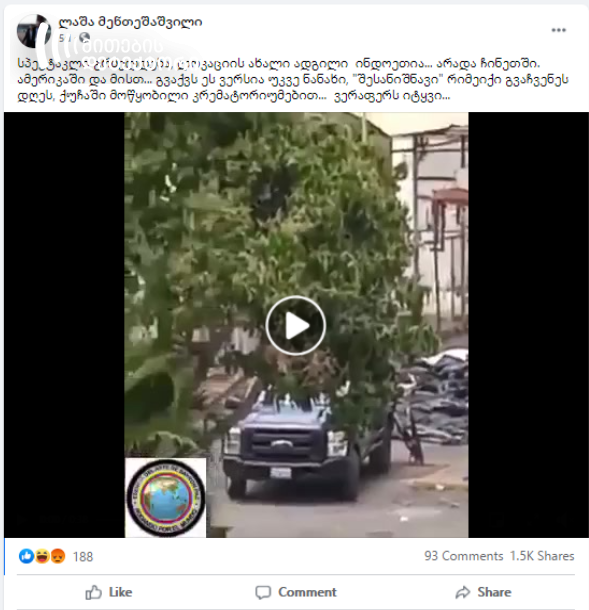 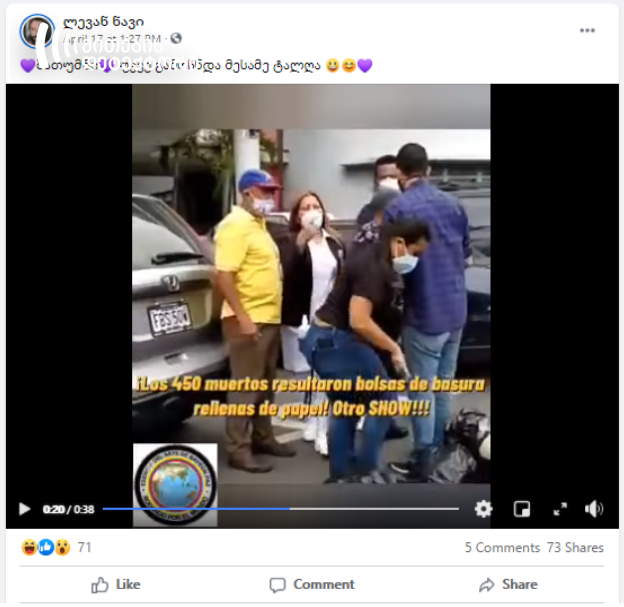 The videos, disseminated in a manipulative way, show footages taken from protest performances, TV reports, and commercial breaks in various countries, not COVID-19-related forgeries. They were taken not in India or Batumi, but in the United States, Russia, Israel, Venezuela, and Brazil.

The video published by Tamara Ottaviani shows that the primary source of the video collage is a Facebook page Sicilia Life Trinacria live 2.0 that published the video on April 23. Such page and video can actually be found. The verification of the footages showed that the majority of the footages were used manipulatively and have no connection to the “falsification” of the pandemic whatsoever.

Footage from the video which plays between 00:23-00:46 and 01:06-01:25 and shows a process of recording a video at a hospital, actually shows the footage from Shamir Medical Center’s commercial shooting process. Dpa-factchecking verified the viral video too and even found its original version.

The footage, published by Tamara Ottaviani, is incomplete and has sound in its original version. The initial version of the video clearly shows a process of a professional video recording, while a Hebrew writing on the hospital staff’s uniforms indicates that the video was recorded in Israel.

The fact that there are openings and pipes on the ceiling is also noteworthy, as it is unusual for a hospital, while it is often the case with underground spaces and parking. Last year, underground wards designated for martial law were actually opened in Israel. 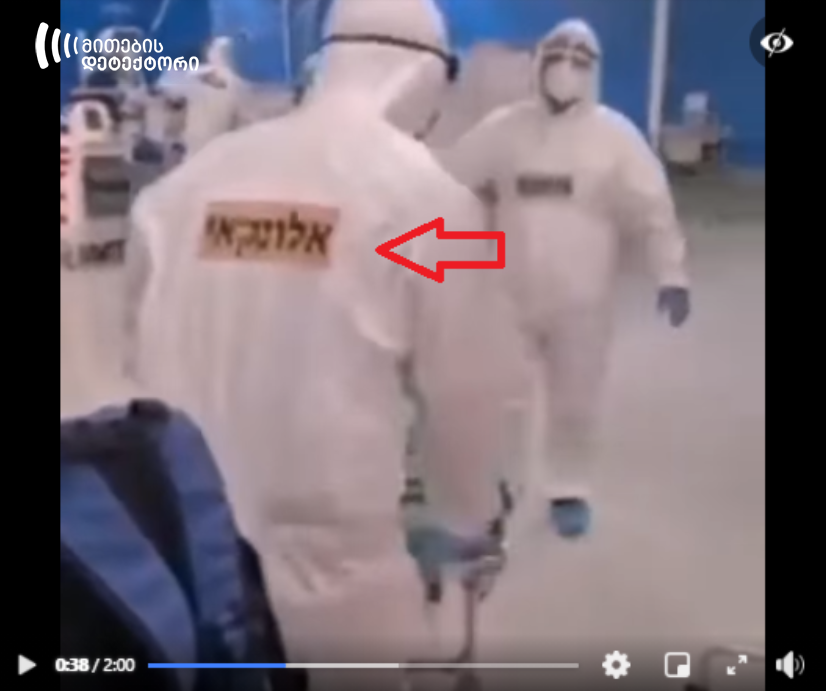 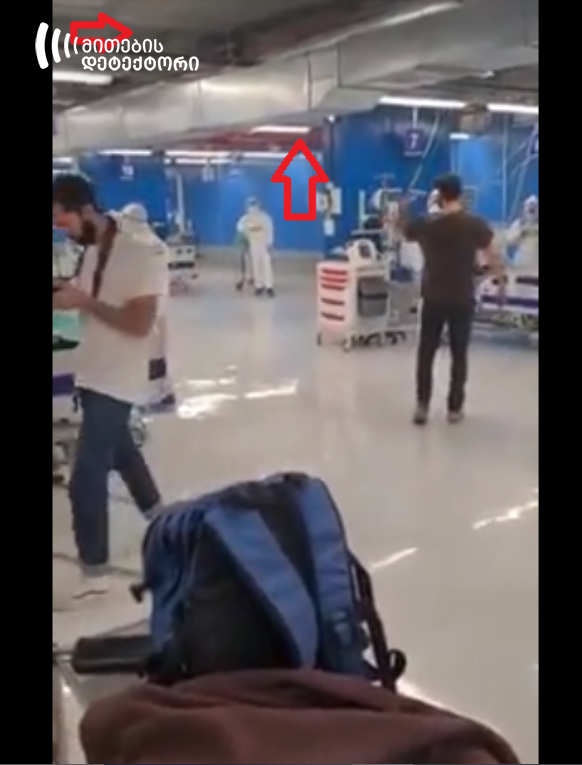 A survey conducted by dpa in several hospitals in Israel showed that the video was recorded in Shamir Medical Center in Be’er Ya’akov.

“This is a part of a commercial video that was being recorded at Shamir Medical Center” – said the spokesperson for the hospital and explained that the video shows an emergency parking space and the commercial tries to demonstrate precisely that the parking space can be converted to a hospital ward.

The fact that the people in the video are not actual patients should also be mentioned. However, doctors and other hospital staff are actual workers at the hospital. The commercial video was published on the Medical Center’s YouTube page on April 11, 2021. It also shows the footages that were later disseminated manipulatively. 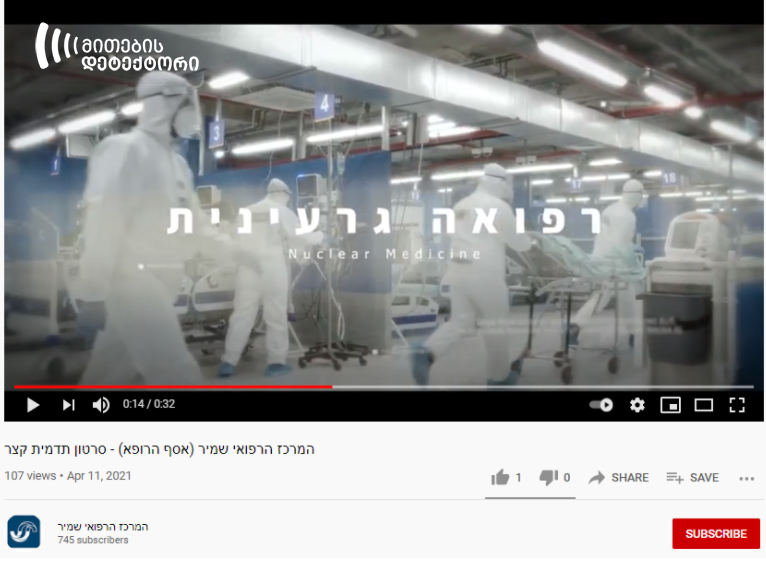 The fragment of the video which features in the collage between 00:48-01:05 was also published by other Facebook users as separate videos. One of them mentioned that the footage is from India, while the other attributed the events in the video to Batumi, Georgia.

The video, however, includes several frames where “430 fellacidos” (430 deceased) and UNIVERSITARIO (University) can be read in Spanish on a banner and a building, respectively. 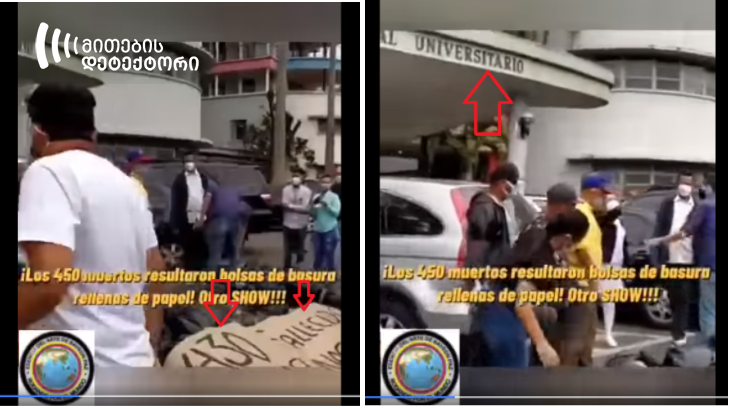 The verification of the video revealed that it was actually shot in Venezuela, in front of Caracas University Hospital (Hospital Universitario de Caracas) and that it shows a protest performance organized by students on April 6. Students, with this symbolic demonstration of protest, demanded importing more COVID-19 vaccines and protested the death of more than 430 healthcare workers due to the pandemic. The video of the protest has also been disseminated by the Facebook page of the Center of National Communication of Venezuela.

Another footage is shown between 01:26-01:45 in the video collage, which allegedly shows a “staged” funeral. The video has been verified by a Brazilian fact-checking agency LUPA, which found that the video was actually recorded in Espírito Santo, Brazil. The video was prepared by TV Vitória for a TV report that touched upon a routine of undertakers and was aired on TV on March 31.

Against the background of the COVID-19 pandemic, TV Vitória was preparing reports aiming at honoring professionals at the forefront of the pandemic. On March 30, the TV crew visited Barra do Jucu municipal cemetery in Vila Velha to record interviews with an undertaker.

The cameraman took several footages showing the routine of the undertakers, such as washing hands, removing the protective equipment etc. Marla Bermudes, a reporter, claims that when they arrived at the cemetery, five graves were already open and the undertaker showed the crew how the dead were buried.

An unidentified individual recorded the process of making the report and attacked the reporters and the broadcaster on social media before the report was even published.

The photo, which can be seen in the video collage between 00:00-00:04, has also been disseminated earlier in a manipulative context and has been verified by the Myth Detector.

The verification shoed that the photo shows a protest in Miami, Florida. The body bags are not real – they are simply a part of the protest performance, the participants of which honored the deceased and protested the reaction of the government to the social problems. The performance did not aim to mislead the public about the number of the deceased. 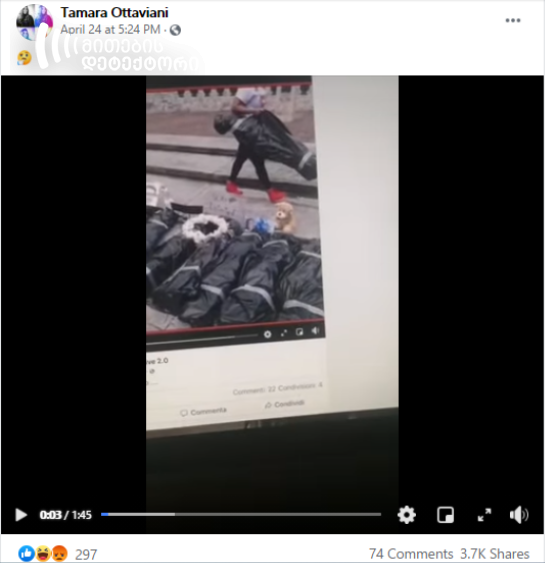 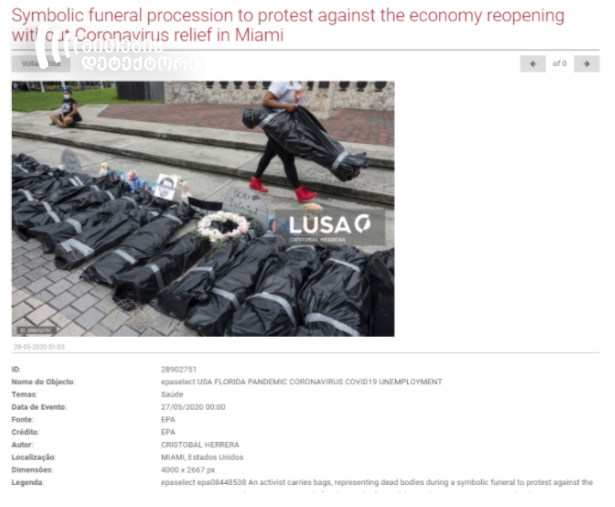 Another video of several people placing “dead bodies” in body bags and one of the “deceased” smoking a cigarette can be seen in the collage between 00:16-00:22. Myth Detector has verified the video and found that the manipulatively disseminated video shows the process of recording a music video of a Russian rapper Husky, not the “victims of the coronavirus”. It has nothing to do with the pandemic. Therefore, an actor is smoking the cigarette in the video, not “the dead”. 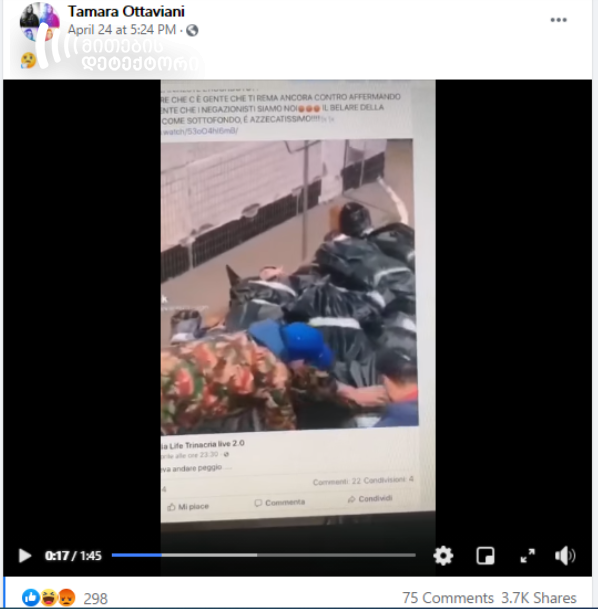 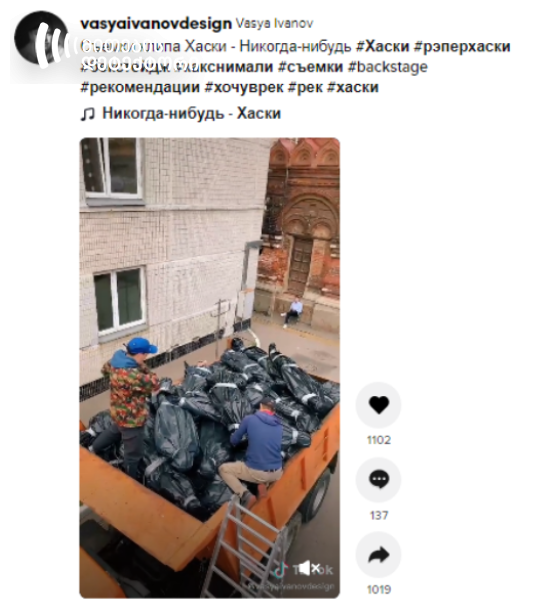