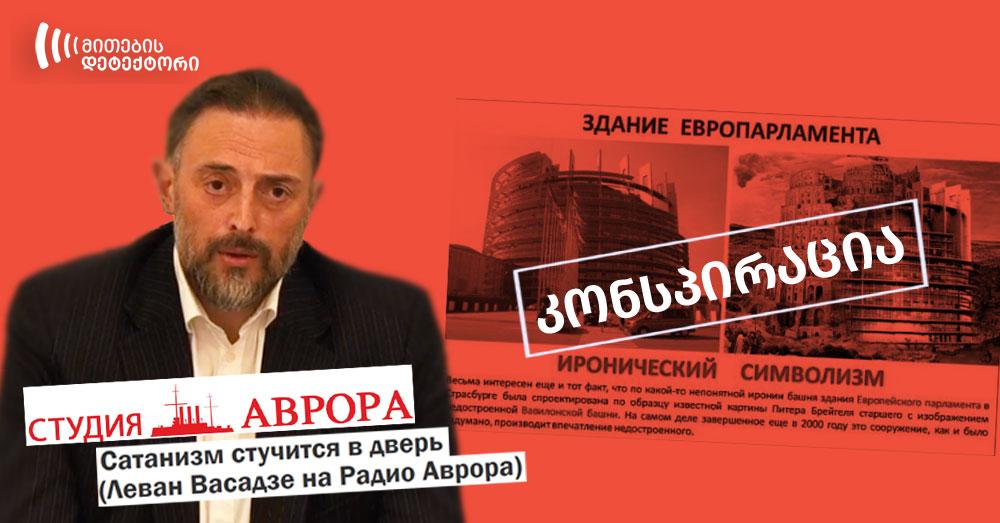 On July 13th, Levan Vasadze-tied Facebook Page “!!Important!!” has shared a video that portrays the European Union as the modern version of the Tower of Babel and encourages Georgians to find their way out as soon as possible. The video includes pictures of Pride Marches held in different countries, images of various LGBT+ supporting politicians and EU and LGBTQ+ flags. The video develops a conspiracy that the building of the European Parliament is built based on the “Tower of Babel,” and the European leaders are linked with Satanist forces.

The video showcases the pictures of Pride Marches held in different countries, former US presidents, and world politicians having LGBTQ+ flags in the background, as well as images of the US and EU flags and illustrations displaying satanic rituals. At the end of the video, while showing the flag of Georgia, one hears a voice saying: “And you, my people, get out of it, escape from Babel.” The quote signifies the escape from Europe and concerns an old conspiracy that the European Parliament is the new Tower of Babel. 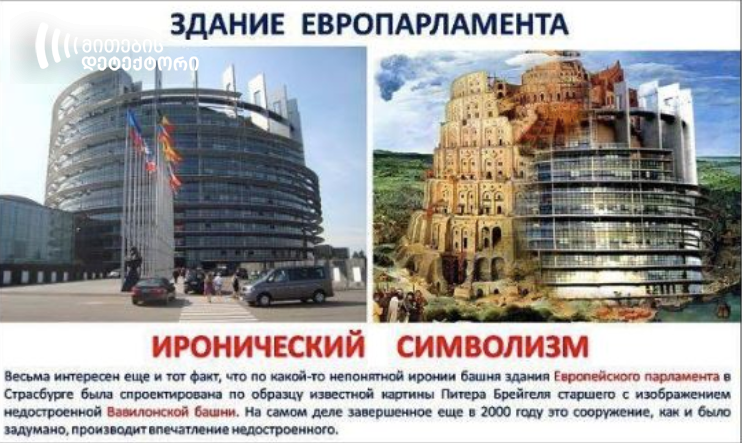 The video develops a conspiracy theory that the building of the European Parliament was built based on the Tower of Babel, and European leaders are linked with Satanist forces. Similar conspiracies were actively circulated among Russian social networks. A similar conspiracy has also been voiced by the pro-Russian businessman Levan Vasadze. The published video contains manipulative elements and includes the image of Pope Francis holding an LGBT+ flag, which is photoshopped, as in the authentic version, Pope is holding the flag of Argentina.

In reality, the design of the European Parliament is inspired by the Roman amphitheatre and not the Tower of Babel. 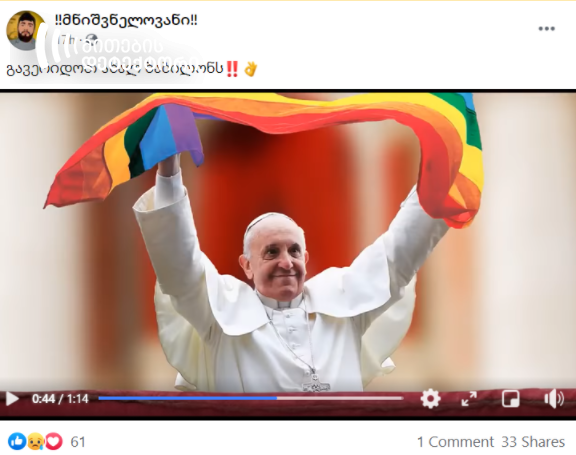 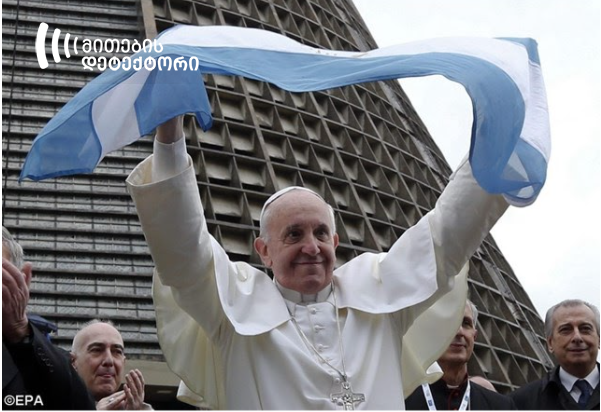 In November 2020, the founder of the radical political party “Unity, Essence, Hope,” Levan Vasadze, compared the European Parliament with the Tower of Babel. During his interview with the Russian “Radio Аврора,” he proclaimed that if we look at the European Parliament from a certain angle, we could see that it represents the model of the unfinished Tower of Babel. The video was uploaded on the YouTube channel of Radio Аврора with the caption: “Satanism is knocking on our doors (Levan Vasadze).” The video no longer appears on the YouTube channel. 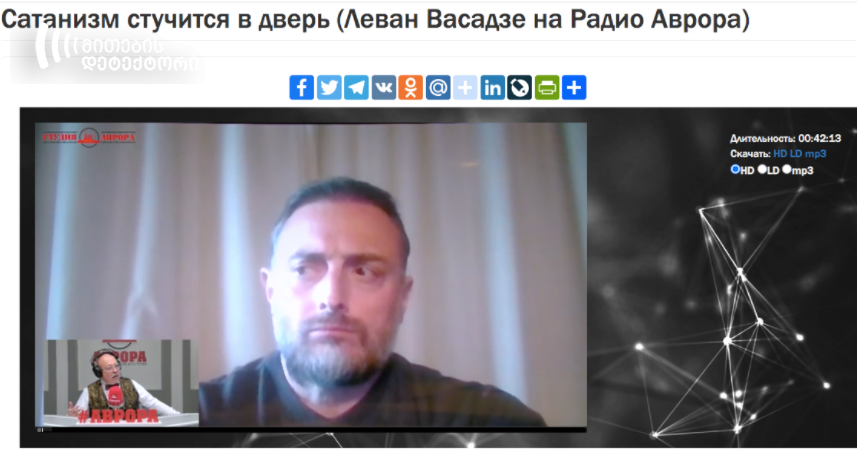 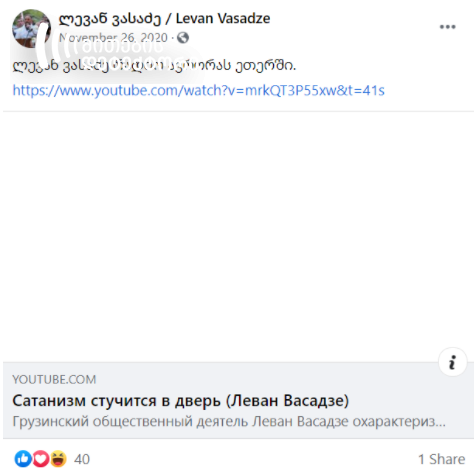 The photo-manipulation comparing the European Parliament with the Tower of Babel has been shared before as well. The sources of such sentiments were initially Russian social networks; nonetheless, pro-Russian online platform TVM.ge has also emphasized the similarity between the two buildings.
For detailed information, see:

The share of the video is linked with the “March for dignity” organized by the Tbilisi Pride on July 5th, which was cancelled because of the counter-demonstrations of the violent groups. The message that the EU is imposing foreign values onto Georgians has been prevalent for years. As for the message: “And you, my people, get out of it, escape from Babel” hints at the necessity to escape from Europe and the West.

About “!!Important!!” and “Georgian Uniqueness”

Page “!!Important!!” was created on June 30th, 2021, days before the planned “Tbilisi Pride” and is heavily linked with extremist media Alt-Info. The Facebook page “!!Important!!” is allegedly managed by the supporter of the party “Unity, Essence, Hope” and Alt-Info – Arsen Popkhadze, who attended the anti-Pride demonstration on July 5th. 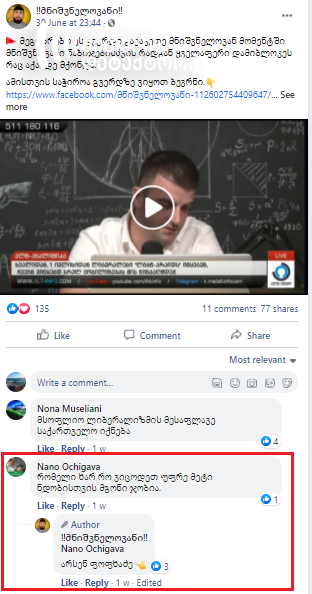 As for the page “Georgian Uniqueness,” which shared the video for the very first time, it was created on October 4th, 2017 and is being managed from Russia. 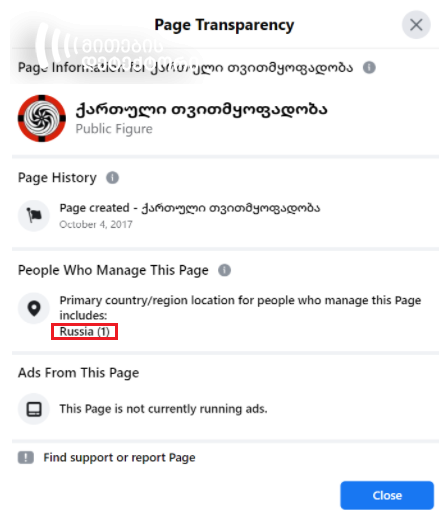 On Violence of July 5th

On July 5th, the “March for Dignity” organized by the Tbilisi Pride was cancelled after violent, anti-LGBTQ+ groups took the Streets, attacked Journalists, and stormed the organization’s office. The violent demonstrations resulted in the injury of more than 50 people (most of which were representatives of the media). The violent counter-demonstration was preceded by a one-month long campaign in which the clergy, pro-Kremlin media, anti-Western issues and other actors were involved. One of the main messages spread through the campaign was that homosexuality is imposed by the West, which plans gay revolutions. During the demonstrations, the EU flag hoisted in front of the Georgian Parliament was forcefully removed twice. In one case, the flag was burned, and the anti-Western and pro-Kremlin pages started sharing pictures and videos demonstrating the destruction of the EU and LGBT+ flags in other countries.