How Politicano Falsified Context of Foreign Affairs’ Article about Hitler 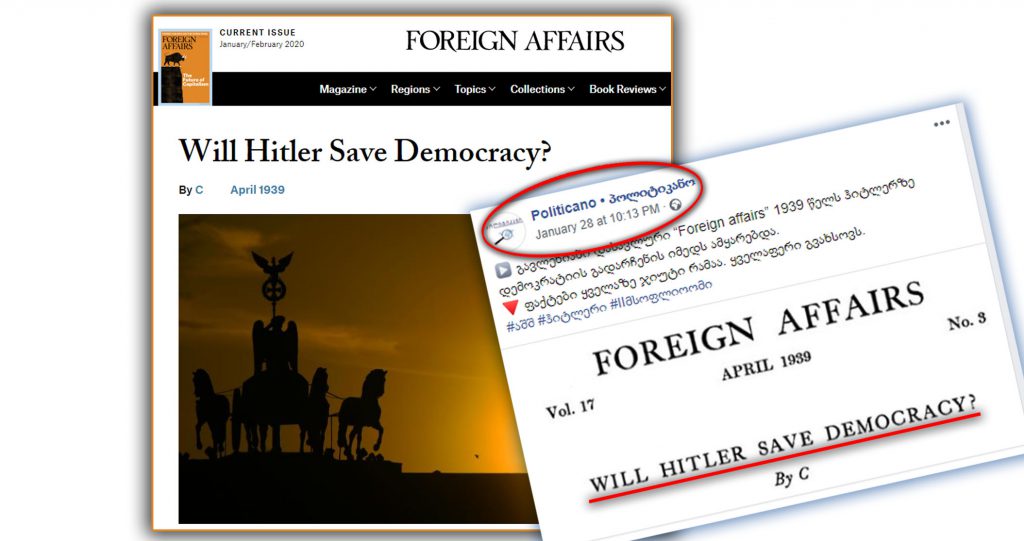 On January 28, Facebook page “Politicano” spread a screenshot of the title page of the article released by American magazine, Foreign Affairs, showing only the name of the magazine, its issue, date of publication and the headline of the article. Referring to its headline “Will Hitler Save Democracy?,” Politicano claims that the American magazine pinned hopes on Hitler in 1939 for saving democracy. Politicano provides no additional information about the content of the article, whereas the post creates an impression that Foreign Affairs’ article discusses Hitler in a positive context. 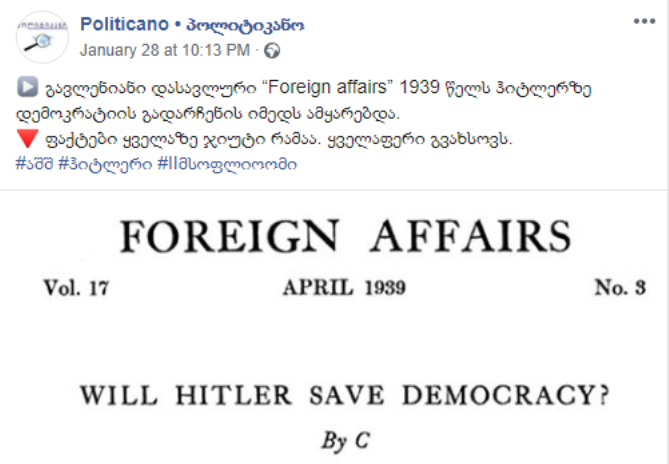 In fact, the article with an interrogative headline (“Will Hitler Save Democracy?”) is about awakening of the democratic society following the twenty-year inaction due to Hitler’s policy. The author slams France and Great Britain, because they failed to obstruct the rise of fascism and Nazism before 1939. Thus, Politicano’s Facebook status is manipulative and misleads the audience through spreading the headline without the content of the entire material.

What does the author write about Hitler and democracy?

In its Vol. 17, No. 3 released in April 1939, Foreign Affairs published an article headlined “Will Hitler Save Democracy?” The author of the article is anonymous, referred to as “C.”
The article starts with evaluating the post-World War I period. The author of the article notes that the peace was lost by democracy’s postwar statesmen, for twenty years united in an attitude of defeatism, to that same autocracy in quest of the same world hegemony, this time led by an obscure World War corporal. The author explains that France and Great Britain overestimated Hitler and Germany’s fighting power, trying to avert a new war and making decisions against this backdrop that further strengthened Hitler. In one word, the author accuses France and Britain of inaction and notes that the defeatism of those statesmen permitted Hitler’s Germany to rearm, increase her territory and population, and create a militarized nationalism openly organized for wars of conquest. 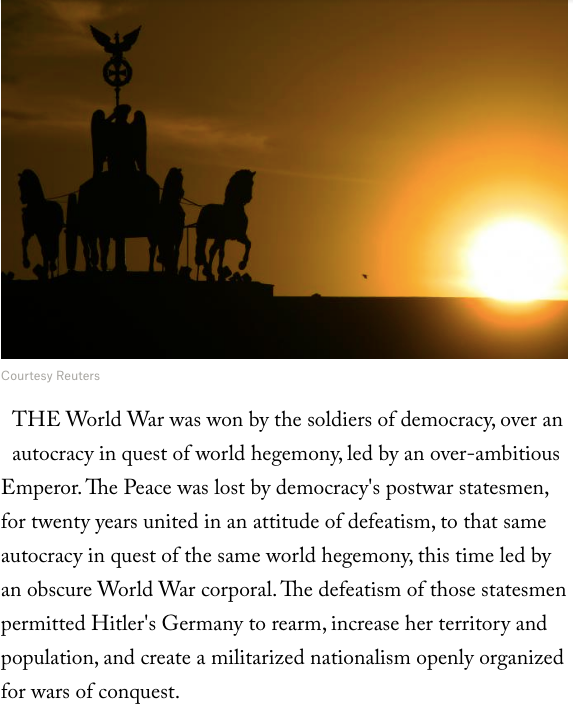 According to the article, many democratic statesmen long believed that the essential conflict was between German and Italian nationalism on the one side and Communism on the other. They realized lately that the basic social principles of Fascism and National Socialism closely resemble those of Communism. In fact, it was an ideological war between the principles of state totalitarianism and the principles of democracy.

The author notes that world democracy finally realized a peril of Fascism and National Socialism in 1939, trying to defend the principles of freedom. He adds that it is one of the most interesting phenomena of Hitler’s political activity that it has resulted in bringing about so soon such an overwhelming and unprecedented manifestation of defensive solidarity amongst the democratic peoples. The author believes that Hitler awakened sleeping democracy in Europe.

“It was their divisions and the defeatism of their leaders which made Hitler supreme. Woodrow Wilson tried to unite the postwar world in an idealism for which it was not yet ripe. It would be the height of paradox if Hitler, of all persons, were destined by his statesmanship finally “to make the world safe for Democracy,” the author explains.

Politicano’s Facebook page is a medium connected to the Primakov Russian-Georgian Public Center. The Center itself has been created, on the one hand, by Gorchakov Foundation, founded by the President of Russia, and, on the other hand, by the International Relations Institute of Georgia. According to the 2017 and 2018 Anti-Western Propaganda Reports by Media Development Foundation, Politicano often resorts to falsification of history and inciting nostalgy towards the Soviet Union.

Find the materials disseminated by Politicano and verified by Myth Detector via this link.