How Liberals were Fought in Different Times 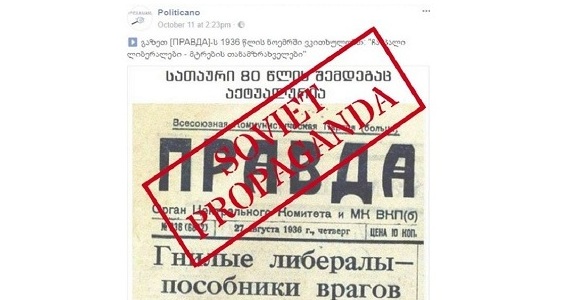 Attacks against liberalism from pro-Russian, on the one hand, and from ethno-nationalist forces, on the other hand, experienced a sharp rise during the pre-election period and at times, became a part of the pre-election campaign. A pre-election video clip of one of the leaders of “Dimitri Lortkipanidze, Kakha Kukava – Democratic Movement – Free Georgia” electoral block, Giorgi Akhvlediani is one of the examples of it. In this clip, he uses a propaganda tool called false dilemma and portrays liberalism as a threat to the national values.

An openly pro-Russian edition, Politicano, which mostly specializes on inciting Soviet nostalgia, publishes a title of a Pravda newspaper article from 1936 – “Damned Liberals – Accomplices of the Enemies” on its Facebook page and notes that the title is still actual today. Pravda’s given article was published in 1936, when the great cleansing began in Soviet Union, which meant physical and political annihilation of members of the Communist Party, as well as all layers of society. This specific article concerned the killing of 16 individuals based on the accusations of “liberalism” and “fascist espionage”. The term “liberal” was used in the Soviet press to define those individuals who Stalin decided to get rid of.

The Pravda article published by Politicano regarded the court process and shooting of Kamenev, Zinoviev and other individuals, who the Soviet newspaper was calling “spies of fascists” and “bastard bandits”, and was labelling them as members of “Trotskyists”, too.

Pravda: “Unfortunately, there are still numerous damned liberals in our party, useless dreamers… Where the heads of the organizations are the communists with Stalinist vigilance, the fruits of the hostile activities disappear… And vice-versa, where the head is a liberal, a ‘Shlyapa’, the black power of Fascist spies are in action… We should expose the damned liberals with Stalinist methods. We should reveal everyone, who lost their revolutionary flair and lack Bolshevik vigilance.” 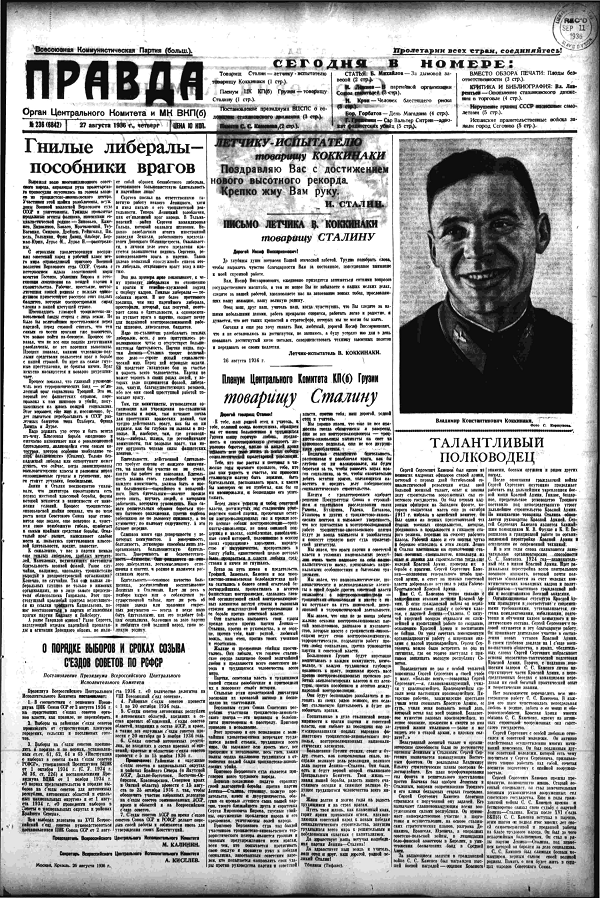 As Pravda’s case shows, press was actively used in the Soviet period to create public attitudes about dissidents, artists and other “enemies of the people”. The fight of the Soviet press against a famous poet, Joseph Brodsky, is yet another example of it.

A November 28, 1963 edition of Vecherniy Leningrad (Evening Leningrad) included an article about Joseph Brodsky titled “Almost Literary Male Bee”, in which Brodsky’s poetry is referred to as pornography, action against the public and treason. On March 13, 1964, the court ruled that Brodsky’s activities and creative life was not serious for the development of the Soviet society and sentenced him to 18 months of heavy works in Arkhangelsk region. Vecherniy Leningrad could not hide its delight with the court decision in its article titled “Court Hearing of the Parasite Brodsky”, where it was ironically describing Brodsky’s biography. 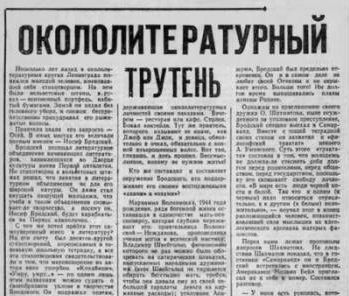 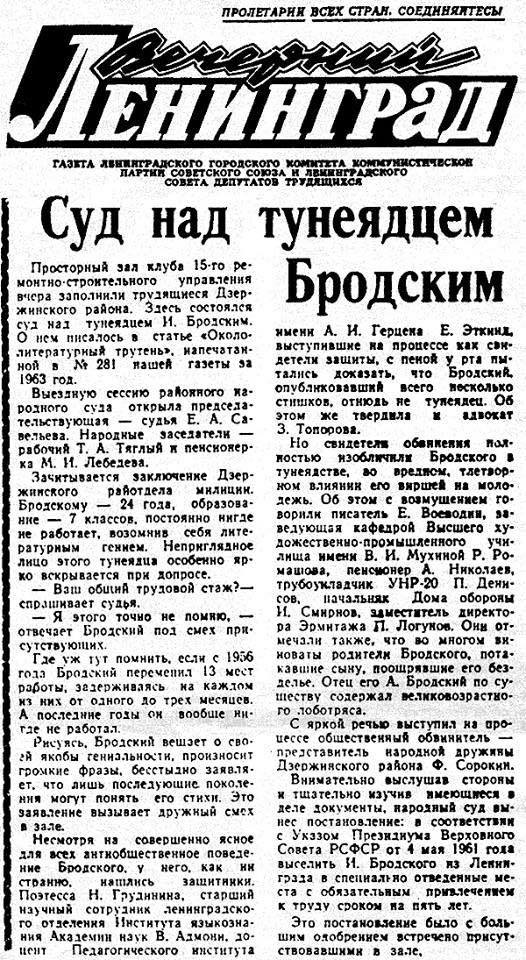 Mobilization of the Soviet press against Boris Pasternak can be seen as yet another example of this. After Pasternak was awarded the Noble Prize on October 25, 1958, Literaturnaya Gazeta (Literary Newspaper), in its article titled “Provocative Offensive of the International Reaction”, wrote that Pasternak “assumed a role of a bait on the rusty hook of anti-Soviet propaganda, implemented by the West”. At the same time, Moscow Radio commented that “awarding Noble Prize for such a mediocre work as ‘Doctor Zhivago’ is a political act directed against the Soviet Government.”

Examples of attacks against liberals and supporters of progress can be taken from 19th-20th century Georgia, as well. The debates between progressive youth and “fathers” around the issue of reforming the Georgian language is remembered in history as “the fight between fathers and sons”, during which the term “liberal” was an offense.

Grigol Orbeliani’s “Answer to the Sons” addressed to Ilia Chavchavadze and Akaki Tsereteli, 1872.

“You mosquitos, flies, liberals,
Weak-minded patriots who lost way,
You kittens, washed off by water – where are you mewing from?
A donkey went away, a donkey came back,
He could not become a man despite the praises,
That ball-like round liberal with empty head and pocket,
You useless journalists!
You’re not French, you’re not English,
You’re not Georgians, then who the heck are you?!
You lazy ants, mosquitoes, flies, liberals, fake poets, fake patriots,
Akakis, Bakakis, Rionians, Gogitians.”

According to Merriam-Webster Dictionary, “[liberalism] is a political philosophy based on belief in progress, the essential goodness of the human race, and the autonomy of the individual”. The individual and the freedom of the individual is the central problem for this ideology. Since the end of the 20th century, there have been ongoing debates between liberals in the United States, as well as in Europe, on the state arrangement. In the United States, liberalism is associated with the policy of welfare state, whereas in Europe liberalism is associated with the principles of limited government and the laissez-faire.