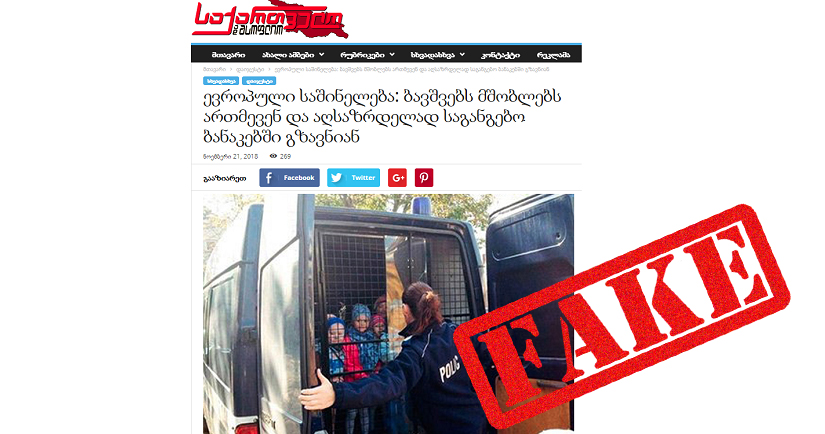 On November 21, a website Georgia and World (Geworld.ge) released an article titled “European horror: children are taken away from parents and sent to special camps for raising.” The article claims that the Netherlands has adopted the law according to which due to intolerant attitude towards the LGBT community, parents are fined and deprived of their parental rights. The article also notes that eight children were taken away from their families on the very first day of enactment of the law. The article involves the statement by Dutch Ombudsman for Children, Aster Maria Jacobs, as well as an image showing a police officer locking the children in a police car. Geworld.ge does not specify its primary source in the article.

Georgia and World: “If previously the Kingdom of the Netherlands used to punish for public expression of homophobia, according to the law adopted this summer, public statements, well-grounded doubts about intolerance towards LGBT community will become the reason for imposing fines and what is most important, deprivation of parental rights. Police have already reported that eight children were “taken away” from families on the very first day of enactment of the law. After three months of raising in special camps, children will be adopted by other families. Dutch Ombudsman for Children, Aster Maria Jacobs said that the State is doing its utmost to help new generation avoid “a nightmare of intolerance.”

The information spread by Geworld.ge is not true, because it is the story fabricated by a satirical online edition and it can be searched only in Russian sources. In addition, the photo attached to the article has actually been taken in Poland rather than in the Netherlands.

The information as if the Netherlands has started to take children away from parents due to the latter’s intolerant attitude towards LGBT community was first spread on October 19 on panorama.pub. The latter uses the same photo for illustrating the story. The website itself warns that all materials posted on panorama.pub are fabricated and satirical. The name of Dutch Ombudsman for Children, Aster Maria Jacobs has been fabricated too. Actually, this position is held by Margrite Kalverboer.

The image used first by panorama.pub and then by Georgia and World for illustrating the story has actually been taken in Poland and not in the Netherlands. It is proved by a label inscription on the police officer’s uniform. Picturing satirical-humoristic publications as genuine information is one of the propaganda methods used by anti-Western editions.

By covering fabricated stories as real ones, propagandistic media tries to portray as if radical measures are being taken in Europe against intolerance towards LGBT community and children are being taken away from their families.