False Claim as if 1918 Spanish Flu was Caused by Vaccines 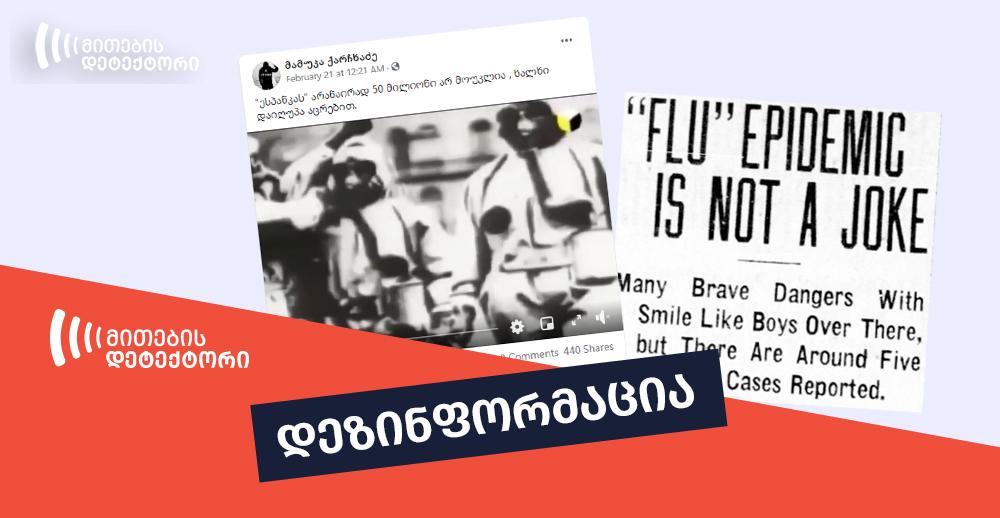 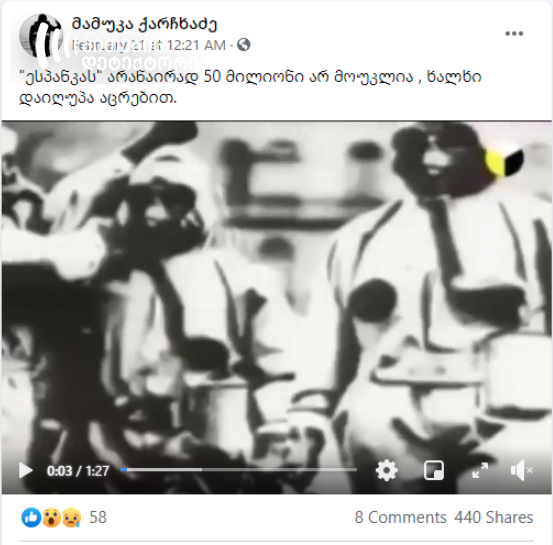 The author’s claim as if the 1918 Spanish flu pandemic and the death of 50 million people were caused by using vaccines against a number of diseases similar to the Spanish flu is unfounded.

The flu vaccine had not existed in the United States until the 1940s. According to the Centers for Disease Control and Prevention (CDC), with no vaccine to protect against influenza infection and no antibiotics to treat secondary bacterial infections that can be associated with influenza infections, control efforts worldwide were limited to non-pharmaceutical interventions such as isolation, quarantine, good personal hygiene, use of disinfectants, and limitations of public gatherings.

1. Vaccines against diphtheria and pneumonia did not exist in 1918

Vaccines against two diseases mentioned in the video did not exist in 1918. The vaccine against diphtheria was created in 1923, but was not widely used until the 1930s. As for the vaccine against pneumonia, it was first licensed in the United States in 1977.

According to the report released by the Centers for Disease Control and Prevention (CDC) covering achievements in public health in 1900-1999, by 1918, vaccines were available only against the following diseases: smallpox, rabies, typhoid, cholera and plague (see table 1). 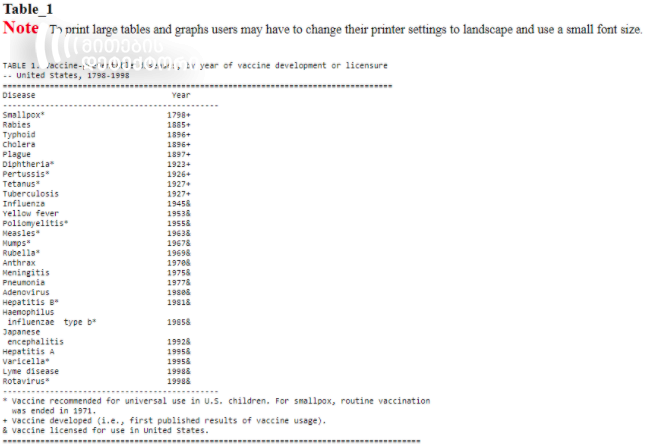 2. Differences between Spanish flu and smallpox

The claim as if Spanish flu and smallpox are similar diseases is false, because they were caused by various viruses, their main symptoms are absolutely different and causes of deaths from these diseases also differ. In fact, the main similarity between these two diseases is that they both are transmitted through respiratory droplets and people with smallpox suffer initial symptoms similar to fever.

The earliest written description of a disease like smallpox appeared in the 4th century CE, while the work on creating a vaccine began in 1796. Owing to the vaccination, smallpox was finally eradicated and no cases have been reported since 1977.

The majority of symptoms are absolutely different: During the first wave of the Spanish flu, the sick experienced typical flu symptoms as chills, fever and fatigue. During the second, highly contagious wave, victims died within hours or days of developing symptoms, their skin turning blue and their lungs filling with fluid that caused them to suffocate. As for the symptoms of smallpox, the infected people showed no symptoms during the incubation period of 10-14 days. The disease was not contagious during that period; then, during the next 2-4 days, people suffered from the following symptoms: high fever, head and body aches, sometimes vomiting. Then a rash appeared on the skin, starting on the face and spreading to the arms and legs, and then to the hands and feet. The skin sores filled with a thick, opaque fluid and often had a dent in the center. Following recovery, the scabs began to fall off, leaving marks on the skin. 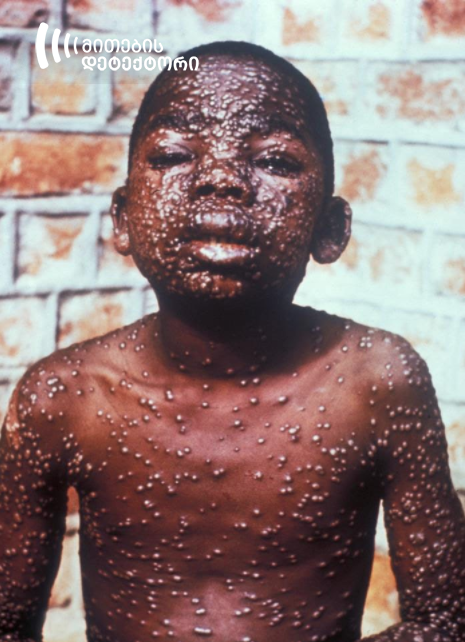 Photo: Image courtesy of the Public Health Image Library of the Centers for Disease Control and Prevention

Causes of deaths are also different: Exact causes of death from smallpox are still obscure, because the infection damages many organs in the human body. According to the report (The cause of death in smallpox: an examination of the pathology record) prepared in 2002 based on the surviving case series of smallpox pathology in humans as well as other review articles from English language journals written during the last 200 years, the cytopathic effects (structural changes in host cells that are caused by viral invasion) of smallpox caused death.

As for the 1918-1919 Spanish flu pandemic, the secondary bacterial pneumonia caused by common upper respiratory–tract bacteria was the main cause of death in most influenza fatalities.

3. Differences between the Spanish flu and plague

The main symptoms of the plague and the Spanish flu are different: The Spanish flu and the plague have mostly different symptoms. The symptoms of pneumonic plague affecting the lungs and causing shortness of breath are similar to those of the Spanish flu. Bubonic plague causes fever, fatigue, shivering, vomiting, headaches, giddiness, pain in the back and limbs, sleeplessness, apathy, and delirium. It also causes buboes: one or more of the lymph nodes become tender and swollen, usually in the groin or armpits. As for pneumonic plague, it affects the lungs and its main symptoms are coughing (sometimes, coughing up blood), shortness of breath, nausea and vomiting.

4. Information about mass vaccination during WWI cannot be searched. The conspiracy theory as if people died from vaccines, not the Spanish flu, was also spread in the American sources.

The post claims that people were receiving various vaccines and their deaths were caused by vaccines, not the Spanish flu. Differences between the Spanish flu and various diseases have already been listed above. As for vaccination, the information about mass vaccination of population against other diseases cannot be searched through open sources.

In March 2020, an old conspiracy claim re-emerged in the American sources. According to this claim, the influenza pandemic of 1918 was the after-effect of the massive nation-wide vaccine campaign and the vaccines killed more American men that the enemy’s bullet. According to Reuters, this claim is unfounded, because in 1918-1919, American soldiers died from the Spanish flu and pneumonia, while a vaccine or a drug against the flu did not exist at the time. It is true that U.S. soldiers during World War I were subject to immunization requirements. According to the paper published by the Bloomberg School of Public Health, during World War I, soldiers were given live smallpox and whole cell typhoid inoculations, as well as therapeutic tetanus and diphtheria antitoxins. The same paper notes that soldiers were given vaccines to shield them from various bacteria during the unsanitary conditions of World War I. 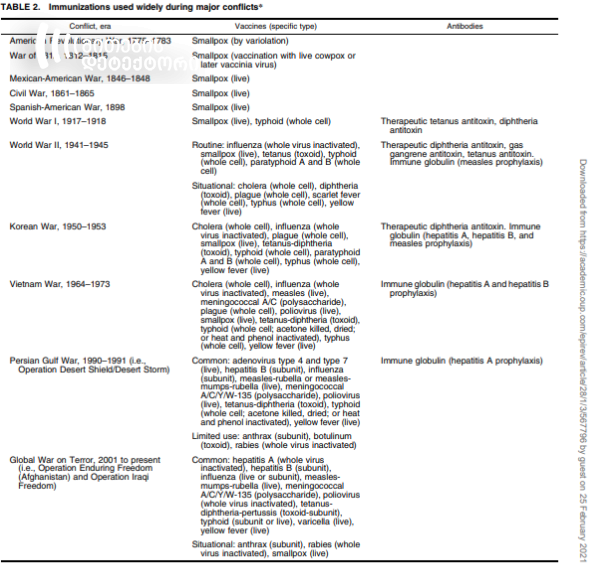 Dr Peter Hobbins, a University of Sydney historian specializing in medicine and technology, told AFP Fact Check that autopsies conducted after the 1918 Spanish flu pandemic confirmed that the primary cause of death was the filling of the lungs with fluid. He also noted that “there was a clear link between the clinical syndrome of ‘Spanish’ flu and the autopsy presentation, and no suggestion that the deaths were due to a proposed experimental vaccine.”

About the Spanish flu

The exact place of origin of the 1918 Spanish flu is unknown so far. However, there are some theories about its origin from France, China, UK and USA. The first cases of the Spanish flu were reported in Kansas, the U.S. in March 1918 and were linked to the U.S. Army. The number of deaths caused by the Spanish flu was estimated to be at least 50 million worldwide with about 675,000 occurring in the United States. The Spanish media was the first to cover the issue. Many assumed the Spanish flu had originated in Spain, but the nickname was actually the result of a widespread misunderstanding.