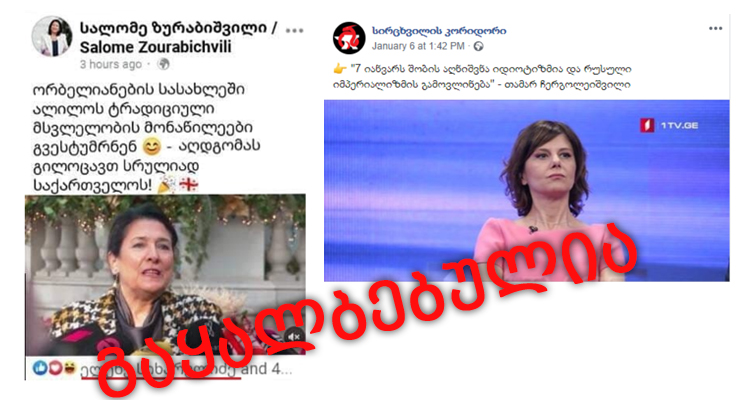 On January 7, a screenshot of Georgian President Salome Zurabishvili was spread on Facebook, as if she congratulated society on Easter instead of Christmas. In addition, on January 6, Facebook page “Corridor of shame” published  a post, which notes that Tamar Chergoleishvili, the editor-in-Chief of “Tabula”, refers to the celebration of Christmas on January 7 as an “idiocy and manifestation of Russian imperialism”. The identical post was also shared by “Jaba Museliani’s blog” on January 7. The screenshot of Facebook post published on behalf of Salome Zurabishvili is fake and has been photoshopped. Easter has been mentioned neither in the greeting post of the President of Georgia, nor in the “Edit history” of the post, while the information disseminated by Facebook pages about the editor of Tabula was made up, since no similar post can be found in Tamar Chergoleishvili’s Facebook news feed. In addition, she does not confirm making any such statement in her comment to the “Myth Detector”.

The screenshot of post spread on Facebook has been falsified, since checking the edit history of the greeting post published on the official web page of the President of Georgia has shown that the only change that has been made, related to the word “visited”. There are no other changes in the edit history. Moreover, the screenshot spread on Facebook shows “Like” of one of the Facebook users – Elene Sikharulidze, which is presented in unnatural font size and gives the impression, that the screenshot has been photoshopped. The editor-in-Chief of “Tabula”, Tamar Chergoleishvili, has not published similar post regarding Christmas celebration on Facebook. To check the information, the “Myth Detector” contacted Tamar Chergoleishvili, who said, that the statement spread on her behalf was fake. She noted that countries that celebrate Christmas on January 7 are under the Russian influence, however, according to her, she never refers to the celebration of Christmas on this date as an idiocy.