Fake Advertisement Disseminated in the Name of Gazprom 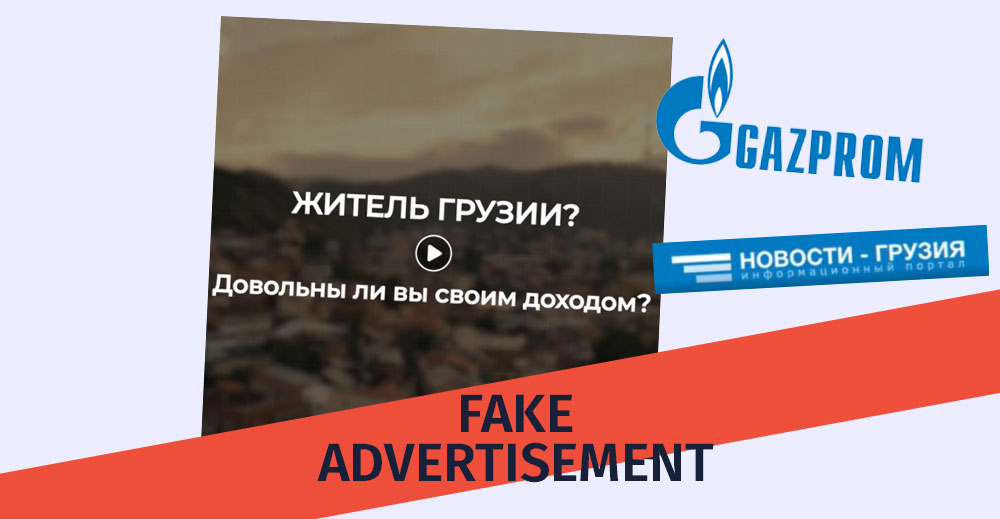 On November 10th, the Facebook pagesQuotes of great men and Office disseminated two commercials in the name of Gazprom, claiming that the Russian company offers the Georgian citizens a monthly salary worth thousands of dollars. 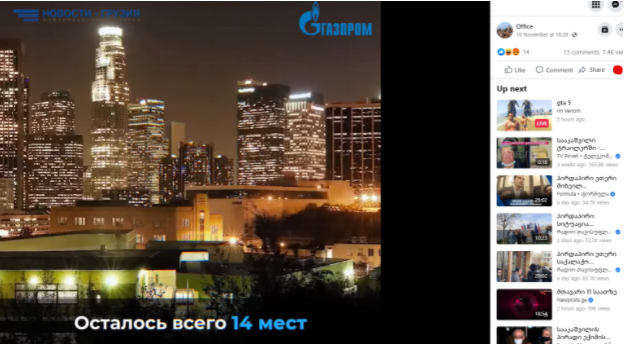 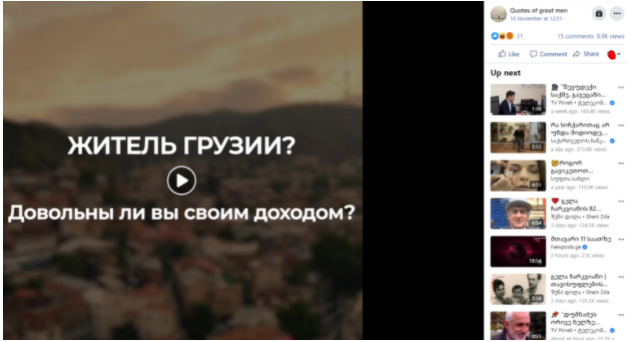 One of the commercialsstated that currently there were only 14 vacant places were left at Gazprom; therefore, the interested people should hurry. The second videostresses that 28 570 Georgian citizens already benefit from the opportunity, and after completing the registration process on a closed platform, people could earn from GEL 10000 up to GEL  35 000. In order to raise credibility, one of the ads is accompanied by the logo of Gazprom. At the same time, on the left side, one can observe the quote “НОВОСТИ – ГРУЗИЯ информационный портал” creating the impression that the vacancy is being disseminated by information agencynewsgeorgia.ge. 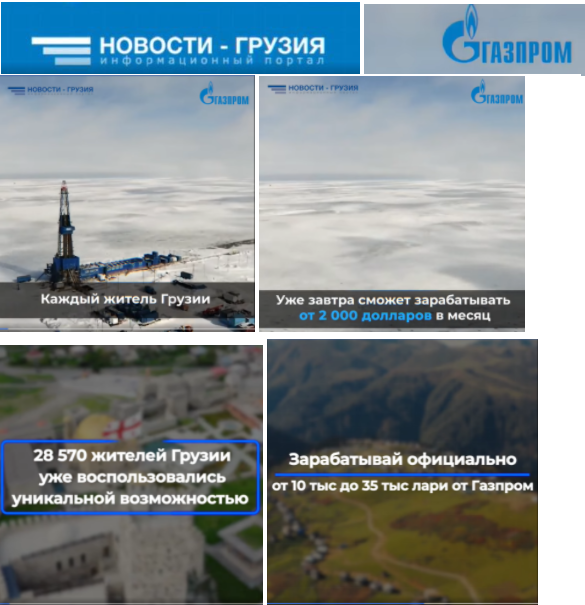 Both videos indicate that interested persons should click the “ПОДРОБНЕЕ” button for more information, although neither the description of the post nor the registration link shows the respective phone number.

Facebook pages offer fabricated vacancies to social network users under the name of Gazprom, which is part of a fraud scheme. In fact, no such announcement or video link can be found on the official website of Gazprom or under the list of vacancies.

According to astatement published on Gazprom’s website, the company has nothing to do with websites that offer various get-rich schemes on behalf of Gazprom, its officials or subsidiaries. The statement also stressed that similar fraudulent activities are punishable by law under the current legislation of the Russian Federation; evaluation of these actions falls within the competence of the relevant law enforcement agencies.

Certain websites that offer employment in Gazprom-affiliated companies require applicants to send paid SMS messages. In order not to become a victim of fraud, one should not call and send text messages to the indicated numbers to get information about vacancies. The Gazprom website states that all vacancies of their companies are available only on the official websites (www.gazpromvacancy.ru, www.hh.ru) and access to the resources of Gazprom Group organizations is free for applicants. 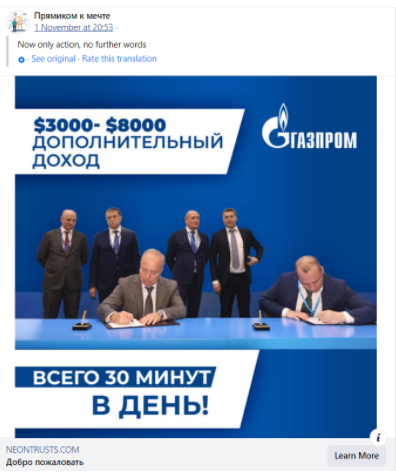 Which pages disseminate the fake advertisements, and what do we know about them?

It is essential to point out that both of the pages are newly created.  “Office” was created on November 7th, 2021, whileQuotes of great men on October 21st, 2021.  The commercials disseminated by them are not visible on their timeline; however, both videos aresponsored, and Georgia is allegedly indicated as the target audience since the content of the commercials is tailored to the Georgian population. 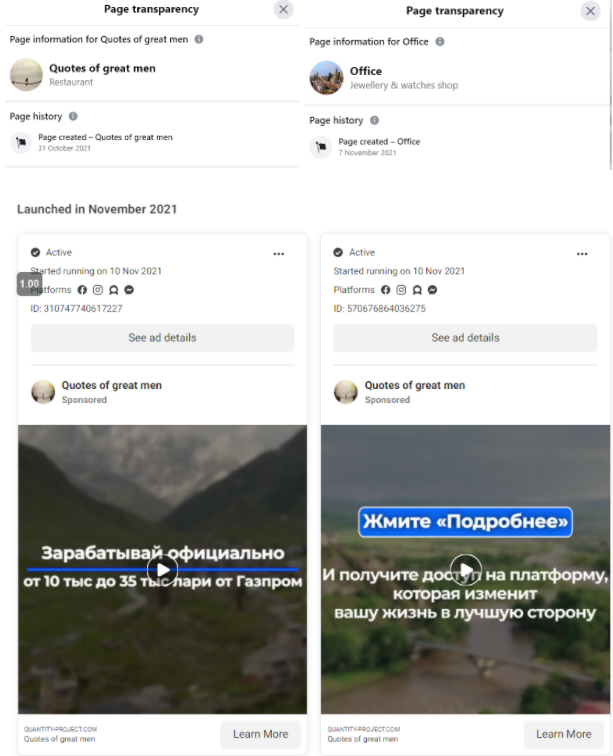 Noteworthy, the left side of one of the videos is accompanied by the inscription НОВОСТИ – ГРУЗИЯ информационный портал. In fact, no such statement can be found onnewsgeorgia.ge. According to the 2014 information of “Liberal,” News Georgia is a Georgian-registered outlet thatproduces Russian-language content for “Russia Today.” According to registrator.ge, the outlet wasregistered in the public register in 2013, and itsdomain – in 2011.

In Georgia, Sputnik illegallyattempted to start radio broadcasting on FM 101.4 in November 2014. The mentioned frequency belonged to “R Radio”. The Georgian National Communications Commission (GNCC) fined R-Radio Ltd and the international news agency Newsgeorgia GEL 5,000 for illegal broadcasting. R-Radio Ltd was warned in writing for violating the obligations under the license N B104.

At first glance, it is impossible to detect fraudulent activity on Facebook pages (Office, Quotes of great men). “Quotes of great men” publishes inspiring photos and quotes and identifies itself as a food outlet. Apart from uploading images, the Facebook pageOffice does not seem to post any other content, although itsdescription states that it is an accessory store. Contact information includes Ukrainian number (+380 99 976 0270) and websitehttp://c.ua/. 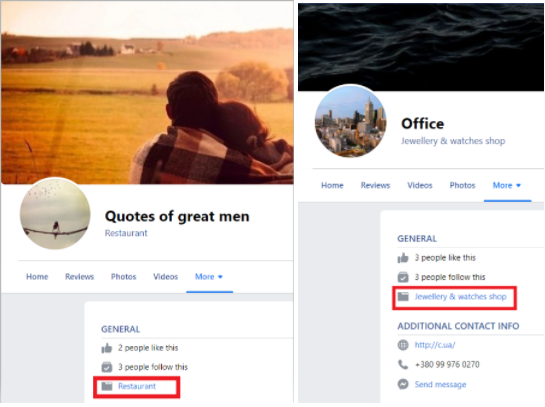 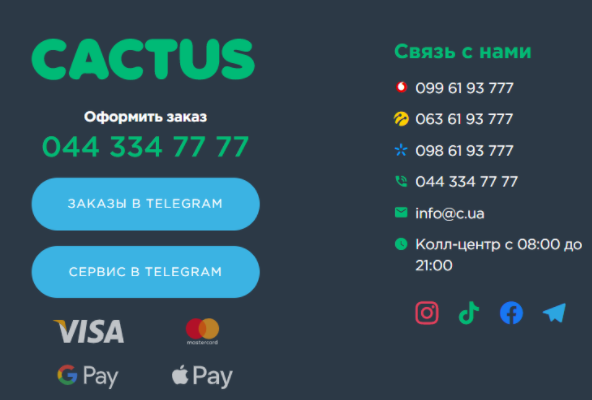